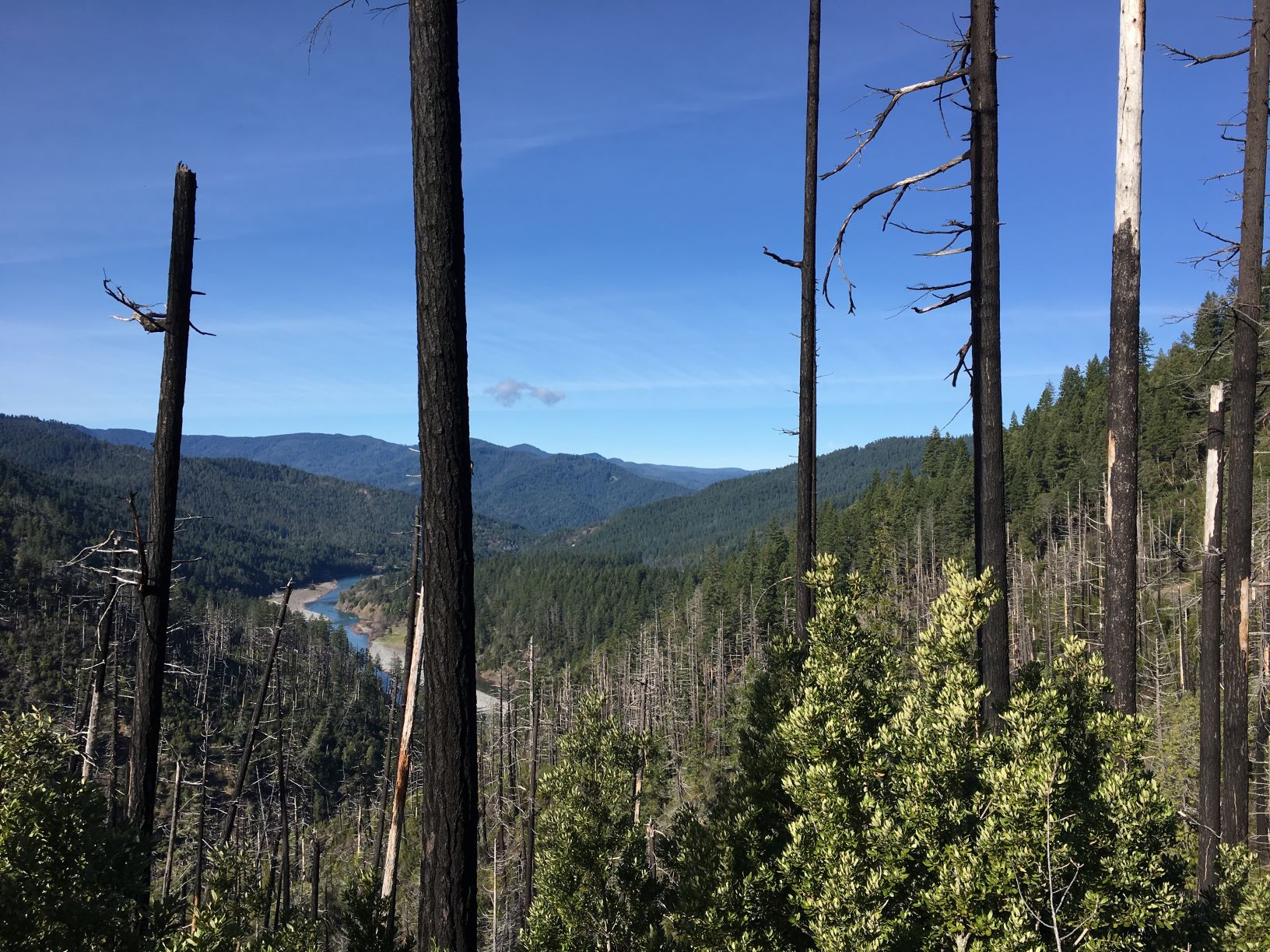 In my book Oregon’s Ancient Forests: A hiking guide, I give a definition of “ancient forests" that focuses on the age of the forest as a whole, as it has developed without much human interference, not just its oldest trees. So, an ancient forest in western Oregon might be one that is recovering from a major fire that burned a century ago, and, while on the young side, has developed naturally with large snags, down wood, a variety of tree species, dense patches, and some five-hundred-year-old trees that survived the fire. In eastern Oregon, an ancient forest might have a few large old trees that survived dozens of fires, and the understory might have reestablished many times after those fires, leading to a mixture of ages and sizes scattered widely in the forest.

Fire truly is an agent of change in Oregon’s forests. It is by far the most significant disturbance in terms of scale and effects, and it is a key process that represents a way that nature renews itself and shapes our living landscapes. 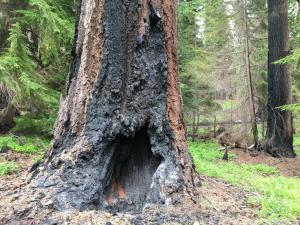 For as long as there have been trees in Oregon, fire has been part of our forests. Historically, different forest types and climates in Oregon have experienced different fire regimes. In some forests, fire tends to burn infrequently and more severely, while other forests tend to burn more frequently and less severely—and everything in between. The fire regime in a moister forest type and climate like the Coast Range, for example, would likely recur at a long interval of a few hundred years but at a high severity where many of the trees would die. In a dry ponderosa pine forest, we would expect fire frequency to be much higher—every five to fifteen years—but fires would be less severe, mostly killing small trees along the ground.

While different regions and forest types evolved with different fire regimes, individual tree species are also adapted to fire in different ways. Some species, such as ponderosa pine, evolved to be tolerant of fire. These trees have thick bark to protect their cambium (the living layer of a tree just under the bark) from the frequent, generally low-intensity fires that tend to burn in the dry ponderosa pine forest type. Other species like lodgepole pine have adapted to unlock their cones to release seeds after a fire to quickly begin the process of regrowth. With thick bark and a love of growing in sunny, open areas, Douglas-fir trees, though often found in moister forest types that don’t experience fire often, are also well-adapted to fire. In an ancient Douglas-fir forest, the biggest, oldest trees often have blackened bark near their base, showing that they lived through a fire, while tree species typi­cally found in moister environments or at higher elevations might not have such adaptations and tend to perish in a high-severity fire.

While fire does kill trees—sometimes just a few and sometimes vast landscapes depending on the severity and intensity of the fire—it also has a rejuvenating effect on forests. The trees that die in a fire are recycled naturally as snags and down logs, stabilizing and enriching the soil and providing much-needed habitat for species like woodpeckers, bluebirds, and bats that depend on abundant dead trees. Fires reset the understory where it may have grown very dense, allowing different species to thrive in burned patches.

Taking fire out of forests

Humans tend to see forest fires as a destructive force, and since Oregon’s settlement by Euro-Americans the natural cycles of fire have been disrupted—significantly in some areas. Indigenous burning practices that kept some forest landscapes more open for the cultivation and use of native plants and hunting were eliminated. Extensive logging has removed the largest and most fire-resistant trees in many areas, making forests less resilient to fire. Just as damaging are fire management policies that sought to prevent and put out fires whenever and wherever they started. This approach has led to an unnatural buildup of fuels and dense undergrowth in areas where frequent fire was the norm. While these changes in fuels and forest structure can affect fire severity, weather conditions determined by climate are more of a deciding factor than fuels in how fires burn. Over the long term, we still need to work to reduce the impacts of climate change, as well as prepare for them. 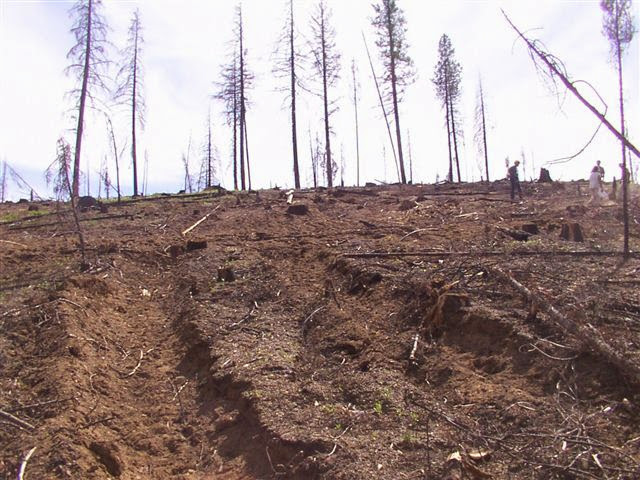 One of the most damaging ways humans have reacted to fire is to rush to remove trees from burned landscapes in post-fire logging operations (also known as “salvage logging”). This stems from the misguided belief that burned trees would “go to waste” – but in nature, there is no waste. This management practice destroys valuable snags and down wood structure and kills young seedlings and sprouts just as they are emerging, while replanting displaces diverse native vegetation with conifer monocul­tures. The logging and associated road building also harms sensitive soils. These actions, standard practice for decades in most of our forested landscape, means that naturally recovering postfire forests are now rare.

“Salvage” logging is also one of the most contested actions humans take in regards to forests, and fights over allowing burned landscapes to naturally recover have been hot. From litigation to citizen protest through direct action, activists, environmental groups, and scientists have long rallied against proposed post-fire logging in places like the Warner Creek fire on the Willamette National Forest and the Biscuit fire in southwest Oregon.

Fire and the future

To have thriving ancient forests, fire needs to be both tolerated in and restored to its natural role. In dry forests in southwest, central, and eastern Oregon, efforts to restore a more natu­ral, more frequent fire regime include removing small fuels that have grown in as a result of fire exclusion, using controlled fires to reduce fuels, and making homes and communities more fire-resilient so they are not threatened by natural processes like fire. These treatments can help forests that have been thrown out of whack by grazing, logging, and fire exclusion to attain a more natural vegetation condition and become more resilient to natural fires. They can also help keep communities safe from uncharacteristic fires. In moister climates, like western Oregon’s Douglas-fir and hemlock forests or in the moist mixed conifer forests of the Blue Mountains, it can make sense to reduce fuels only if fire exclu­sion and suppression have significantly altered the natural fire regime and if large trees and other fire-resilient structures are not removed. Community and home adaptation and preparedness is also as climate-driven weather events and drought bring more frequent fires to our doorstep, as it did this past month in western Oregon.