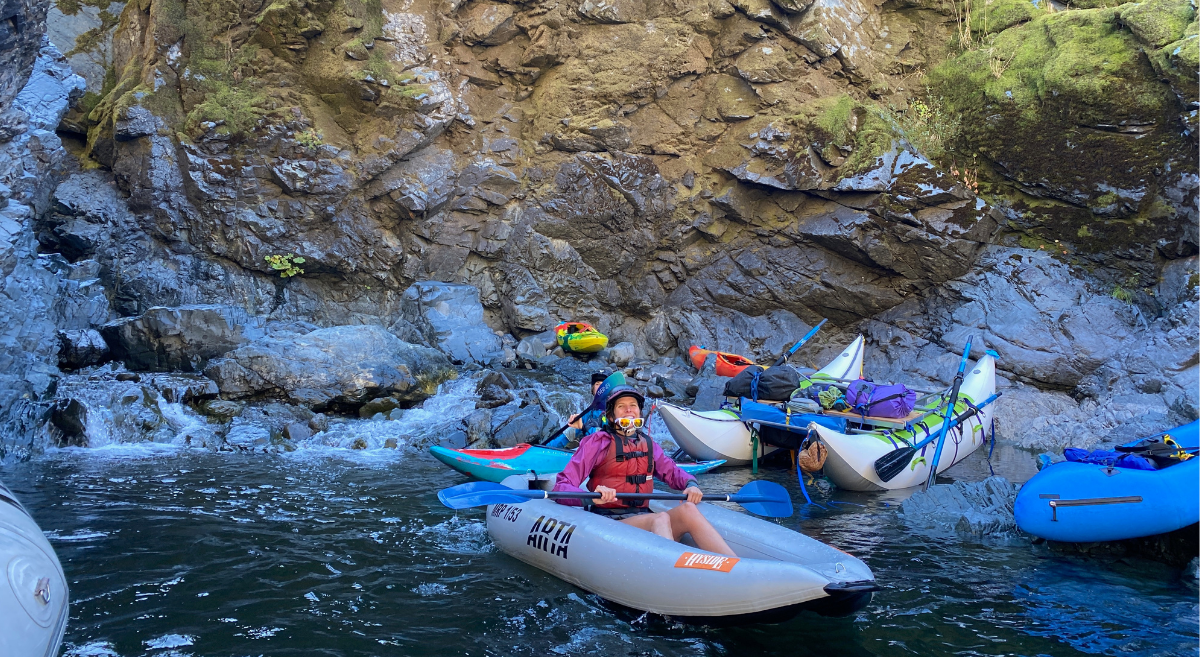 I learned this phrase at the outset of a six-day paddling trip and writing workshop with The Freeflow Institute on the Wild & Scenic Rogue River. It's a way to communicate and maintain a bit of structure while traveling as a group through a remote wilderness area with no service and minimal technology. For example, if you shout, “Coffee will be ready in five arbitrary river units!”, no one's going to miss the meaning—or the chance to get first dibs on that sweet nectar of life.

It's more than that, though. Arbitrary river units are not only a way to keep time and loosely organize a group. This measurement is an acknowledgement – and an understanding – that on the river, time doesn't move according to a clock.

It flows. Slow, gentle, with the first light of day glancing over ridgetops and shifting the world into color and warmth. It roars with the approach of a rapid, a distant rush reverberating up the canyon. I can feel it thrumming through my entire body, scattering my nerves until they’re somewhere between anticipation and dread. It unwinds, as we pull our boats ashore, unpack lunch, and spread wet layers across rocks in the sun. And it meanders through the afternoon, kicking up its feet and taking in the view around each bend, in no hurry at all.

On the river, time is measured by the hands gripping a paddle or a set of oars, using physical strength and the power of the current to propel forward from one moment to the next. Its passing is marked by rapids on a map, by a great blue heron accompanying our boats downriver. By salmon jumping in the waning evening light, or a black bear and her cub clambering along the shore on an endless hunt for late summer berries. By the smell of coffee in the morning. The always-present sound of flowing water. The search for the perfect sleeping spot and the last call for the groover as we’re packing up camp each day.

This is what I learned on the river last fall. It is a gift.

Growing up in Pennsylvania, I didn’t know what a Wild & Scenic River was. I knew the creek that wrapped around my neighborhood, where we kids searched for crayfish in the shallows. I knew the river that flowed through the nearby city, how it smelled like a sewer after big storms. I knew the harbor that smelled of oil and industry and fish. The bay that filled with algae blooms that depleted oxygen and blocked sunlight from the ecosystems below.

And yet, these were the places where I learned to swing from a rope tied to a tree, trying to prove my courage—and also not belly-flop. On these waters, I paddled a canoe with my dad, learned to kayak, and raced in triathlons. Later, as a law student working on local water policy, I began to understand the connection we all share to the water flowing through our communities.

Rivers shape us, whether we realize it or not. They change our perspective, our outlook, our mood. Through their soothing, rhythmic flow. Through their presence that is both constant and ever-changing. And other times literally, as we round a bend and discover new wonders.

As a kid, I learned to trust myself when I let go of the rope swing and flailed to stay upright as I arced toward the water. I have been humbled by river crossings during summertime mountain running, some of which have haunted me for years (lookin’ at you, White River and Big Muddy). The Pacific Northwest glaciers that I love to ski in the spring provide refreshment and hydration during summer, as well as Bend, Oregon’s drinking water. Paddling an inflatable kayak, a ducky, on the Rogue last September, I discovered that I could try something new and feel terrified to my bones at the top of the Mule Creek Canyon. And then I could grit my teeth and paddle through it. I was reminded that I am capable of more than I think.

And we shape rivers, too – for better or for worse. During my Iaw school internship in Pennsylvania, I learned that working with farmers to minimize cow access to flowing streams allows freshwater habitat to thrive. Planting vegetation between sidewalks and streets helps filter stormwater runoff into nearby waterways during heavy precipitation events. Living in Bend, I’ve noticed the correlation between the area’s steadily shrinking glaciers and increasing droughts across our state.

In 1968, Congress passed the Wild and Scenic Rivers Act to preserve certain rivers for present and future generations. In recognizing the natural, cultural, and recreational value of these rivers, the Act encourages community stakeholders to come together to manage and protect their rivers in a way that balances a river’s natural state with the needs of the communities and the wildlife that depend on them—needs like farming and irrigation, clean drinking water, and recreation.

In Oregon, about 2% of the state’s river miles are currently designated as Wild & Scenic, including sections of Whychus Creek and the Deschutes and Crooked Rivers in Central Oregon. In 2019, Senator Wyden stated his commitment to not only increase our state’s number of Wild & Scenic river miles, but to become a national leader. He sought public input in nominating rivers, and this spring, he and Senator Merkley introduced the River Democracy Act of 2021, which proposes the addition of 4,700 miles of Oregon’s rivers to the National Wild & Scenic River System.

At the bottom of Mule Creek Canyon on the Rogue River, our little group of kayakers huddled together to check in. We’d all made it through without getting tossed or spilled from our boats. As I looked at the faces around me, the fear and anticipation that had gripped me, the focus and exertion I’d put into each paddle stroke, the rush and the thrill – it was all churning within me, as wild and turbulent as the water we’d just paddled through – and my throat closed, my eyes filling with tears of awe and disbelief. Unable to speak, I nodded to my friends and we paddled out of the canyon. Moments later, my brimming emotion turned into exuberance and celebration. These are the arbitrary river units I will never forget, and I want others to experience, too.

Healthy rivers not only support wildlife habitat and connect communities. They give people a place to find a new perspective, to discover something about themselves or their backyard, to learn, stretch, and grow. To swing from the rope, paddle toward that roar of whitewater, or to sit and watch. Rivers provide a place where time moves with the flow of the water, with the life of a salmon, and the expansiveness of the night sky.

In its own time, measured in arbitrary river units.

Alli Hartz is an author, athlete, and advocate based in Bend

Do you support protecting more rivers and streams in Oregon? Become a Citizen Co-Sponsor of the River Democracy Act today!