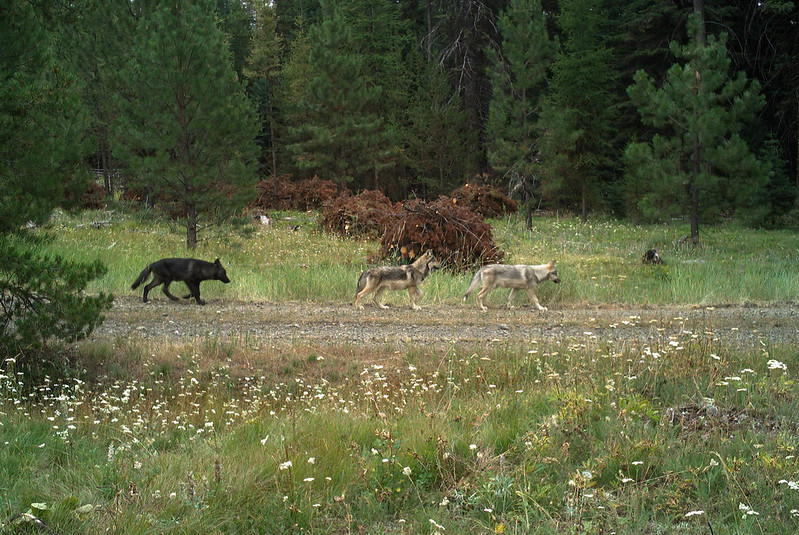 Thank you for filling out the survey that was shared in last month’s newsletter. The feedback was helpful and we’ll work to incorporate some of your suggestions into our wolf pack newsletters, starting with this one!

If you want a monthly update on Oregon's wolves and wildlife delivered straight to your email inbox, join the Oregon Wild Wolf Pack.

Around the region
If you’ve been following Washington’s wolf management history, you likely know that it’s a tumultuous one. The Washington Department of Fish and Wildlife’s tendency to kill wolves (even whole wolf packs) instead of exhausting appropriate nonlethal measures first often comes under scrutiny. Unfortunately, their recent decision to kill remaining members of the Wedge Pack is no different. For more information, check out this press release from our partners at the Center for Biological Diversity.

Science and Research
The decision to reintroduce wolves into Yellowstone National Park was not only an important step to right a historic wrong (namely, the extirpation of the species), but also has provided the scientific community a unique “laboratory” by which they can study ecosystem impact.

“So what have scientists learned in 25 years? True to their keystones species role in the Greater Yellowstone Ecosystem, the wolves created what ecologist call a trophic cascade. Basically, once they resumed their role as a dominant predator, the effects rippled through the ecosystem. Wolves knocked down the elk population, willows sprung back, and beavers benefitted, which resulted in more beaver ponds that in turn created habitat for other aquatic animals.”

In a move surprising to no one, The Trump Administration recently announced their proposal to roll back critical habitat protections for the imperiled Northern Spotted Owl. In Oregon specifically, that could mean over 200,000 acres of critical habitat would be removed, a huge loss for an already fragile species. The public comment period is officially open, so please send the US Fish and Wildlife Service a comment with your concerns before October 13th!

In better news, our partners in conservation recently won protections for salmon and steelhead on the Willamette River. The judge ruled that the US Army Corps of Engineers and the National Marine Fisheries Service failed to take necessary steps to protect these fish in violation of the Endangered Species Act. The Corps has known for years that they must do more to support fish passage and water quality, which the judge has now affirmed. This is a great win for two of Oregon’s most iconic fish species!

This is just awful and really underscores the importance of protecting and restoring all of nature’s ecosystems, but especially those most vulnerable and fragile.

Kudos to our friends at the Xerces Society for fighting for the little things (in this case, freshwater mussels) that make the world work!

It’s so fantastic to see that Tahlequah (the orca who carried around her dead calf for 17 days) is pregnant again!

Please help show your support for Oregon Wild by joining us on October 9th at 7PM for our annual, camp-inspired benefit, Call of the Wild. While we won’t be able to gather together in person, we are still looking forward to celebrating (virtually) our collective efforts to protect and restore Oregon’s wildlands, wildlife, and waters!