A Bike Tour of the Giants 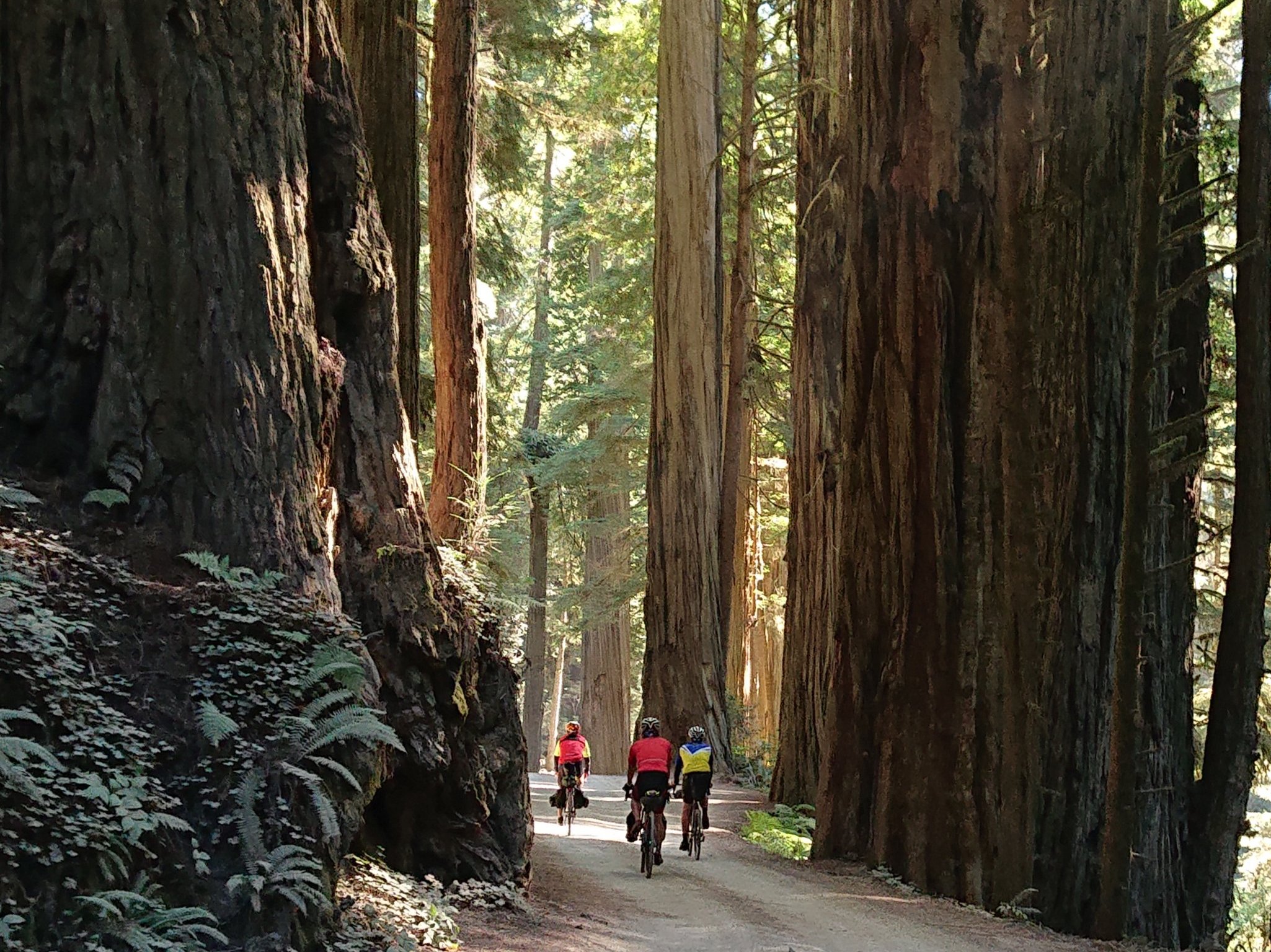 By Kevin Briggs and Ben Groeneveld

The redwoods in Stout Grove were skyscrapers of trees, towering over our bicycles like great living monoliths. Beneath them, we seemed inconsequential--silly almost--trying at times to awkwardly ride with faces upturned seeking glimpses of the green peaks. How old were the trees? Unfathomable really. We, a group of middle-aged cyclists, were newborns by comparison. Cycling through the redwood grove imparted a childlike exhilaration; we had entered a candy store of natural beauty. Yet I also felt the lingering fatigue of the accumulated miles, over two hundred. Was I feeling my age or was this year’s bikepacking tour just painfully hard? 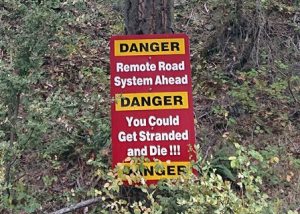 The route had been challenging. The 280-mile loop had taken us through the Rogue River-Siskiyou National Forest in Southwest Oregon, followed the Oregon coastline, and dipped into the redwood groves of the California coast. Nearly all the paved and gravel roads were undulating, and the climbs were measured in miles with grades of steep pitches. The terrain was rugged and, at times, very isolated. We had taken a road, Bear Camp Road, where the remoteness had ended in tragedy for the Kim family in 2006. James Kim, his wife, and two young children had been driving to the Oregon Coast when their car became stuck in the snow. After being stranded for nine days despite rescue efforts, James Kim died in a futile on-foot attempt to seek help. We had cycled past a sign that now announces a stark warning, “You Could get Stranded and Die!!!”

During the first two days, we were immersed in this isolation. We cycled nearly a hundred miles without passing facilities of any kind and, more importantly, any water sources. The days were hot, and the sweat was constant. The long climbs seemed insurmountable. When we arrived at our first night’s destination, Galice, some of us were cramping; and we were soon soothing our tired legs in the cold waters of the Rogue River. 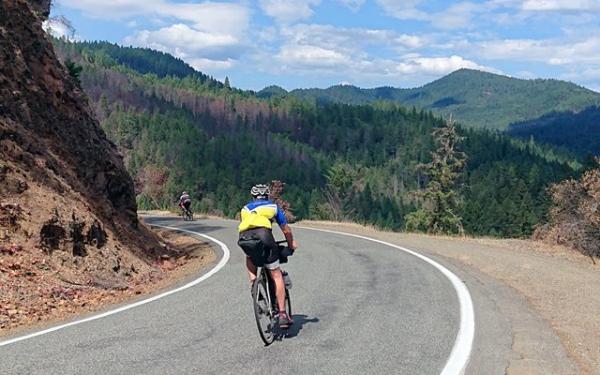 We dined that evening at Morrison’s Lodge, which seemed an oasis of rustic elegance. Set out on a wooden deck overlooking the river, the welcomed dinner that evening was multi-course, highlighted with salmon and punctuated with a homemade berry cobbler. Agnes, our destination on the second day, was another tiny pocket of homes and a single grocery store amid vast stretches of mountainous wilderness. There we camped on the property of Lucas Lodge, a rambling two-story building built in 1912. For decades the family-owned lodge had accommodated travelers and fly fishermen. Jennifer, the proprietor, prepared dinner family-style, large bowls of food that were passed with silent expectation. 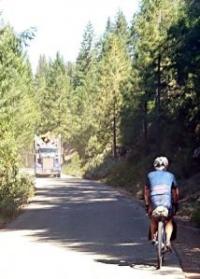 The mountains were covered in the green of Ponderosas, Douglas fir, and cedar. But patches of clear-cutting indicated this was also timber country. Logging roads reached into the heavily forested landscape, a capillary network of gravel and pavement. Occasionally, timber trucks, spanning much of the narrow roads, passed us. All past without incident except one, who shouted at us. The forests provide recreation for us but a livelihood for him. These contrasting uses were immortalized for us on a sign in Jedediah Smith Redwoods State Park. The sign dedicates Stout Grove, a notable old-growth redwood track of .07 square miles, to Frank D. Stout, a lumber baron who in the early 1900’s was one of the wealthiest men in the country. Only about five percent of old-growth coast redwood forests remain today. 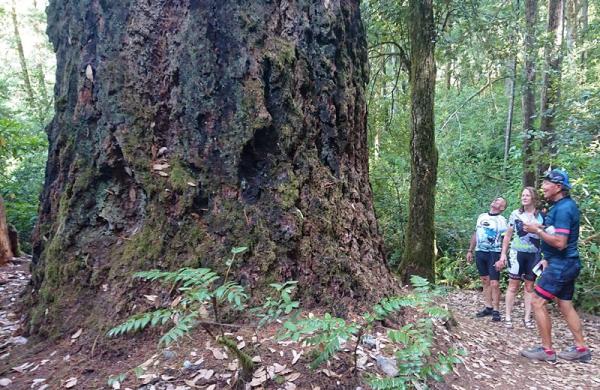 Exploring some of the remaining old-growth forest was one of the highlights of the tour. We first visited the Shrader Old Growth Trail, a short hike through some of the largest and oldest hardwoods and Douglas firs in the Pacific Northwest. Shortly thereafter, the first sight of maritime fog indicated that the coast was near. Refreshingly, the air cooled, and we saw the Pacific for the first time. The coast had pockets of old-growth forest. We walked among some of Oregon’s oldest redwoods by Alfred Loeb State Park. As we cycled south into California, we frequently saw the remains of more of the great trees, now massive stumps wider than tabletops. 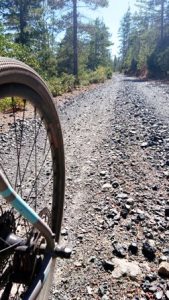 After leaving Stout Grove, only about forty miles remained. But the miles were tough ones, mostly rough gravel and seven miles of a busy, shoulderless highway. The highway came first, a constant stream of traffic on winding asphalt through deep green forests along the Smith River. Each rider followed closely the next wheel ahead: as a group perhaps we were safer; yet we conceded, consciously or unconsciously, that the group could endure tragedy rather than a lone cyclist. Over decades I had ridden with countless cyclists, but these six were among the most supportive. They had addressed the inevitable weaknesses of body and machine without complaint. We would arrive at the finish together, drafting behind one another’s strengths to cut against the winds of adversity. We focused on safe passage, ignoring the sometimes angry drivers who often passed uncomfortably close. Only seven miles of road, but even a hundred yards was sustained worry. With great relief, we finally turned off the road, intact and almost giddy.

The longest stretch of gravel remained. With sustained climbs, the remainder of the route would be the most physically demanding of the tour. We began in good spirits. The finish within reach that afternoon, we exchanged encouraging words. The group splintered apart on the climbs, and I was left, for long periods, cycling alone. Occasionally on a straight section of road, I would see someone ahead or behind. Heads were low in fatigue. The gravel road demanded constant attention to avoid potholes of every depth and washboard surfaces with its jarring vibration. Even the gravel itself was hostile, large jagged chunks that were more rock than gravel. 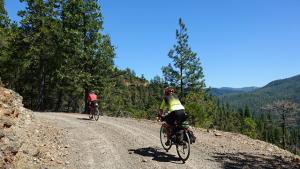 Mostly at intersections, the group rejoined. Conversations were short and direct. What humor remained turned darker. The inevitable question: “How much further?” The response: “An eight-mile climb but not as steep.” Initially, I thought it was a cruel joke. Someone, with little conviction, then suggested that a long downhill followed the climb. Just before we began our tour, I had read of Dr. Hannes Lindermann, a kayaker who paddled across the Atlantic, once in a canoe and again in a folding kayak. Lindermann had concluded that, in an endurance event, the mind breaks before the body. I took some solace in that conclusion. Although my body was exhausted with nagging neck and shoulder pain, the ride had not lost its allure.

The trees were still majestic and the mountains were still beautiful: an almost spiritual escape from our daily lives continued. I was unsure of Lindermann’s conclusion—I had hardly equaled his effort. It reminded me of another thought on bike racing endurance. In “The Rider,” Tim Krabbé wrote, “Because after the finish all the suffering turns to memories of pleasure, and the greater the suffering, the greater the pleasure.” Our finish, however, was still miles away.

After nearly ten hours in the saddle, we did finish. Uncertainties of body and road had not prevailed. On the road we had cheated age of its inevitable victory. At that point I knew the memories of the tour would be like those of the ancient giants, tall and grand. And like those great trees, we had defied time if only for a handful of days. 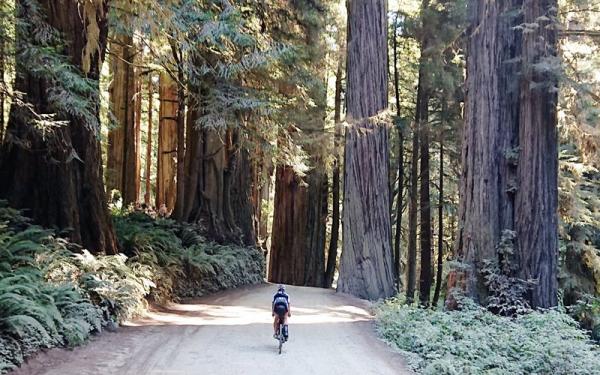 For route specifics, mileages, and maps, see the Tour of the Giants. To learn more about the club Kevin and Ben cycle with, see the Central Oregon Wheelers.