The Blowdown at Humbug 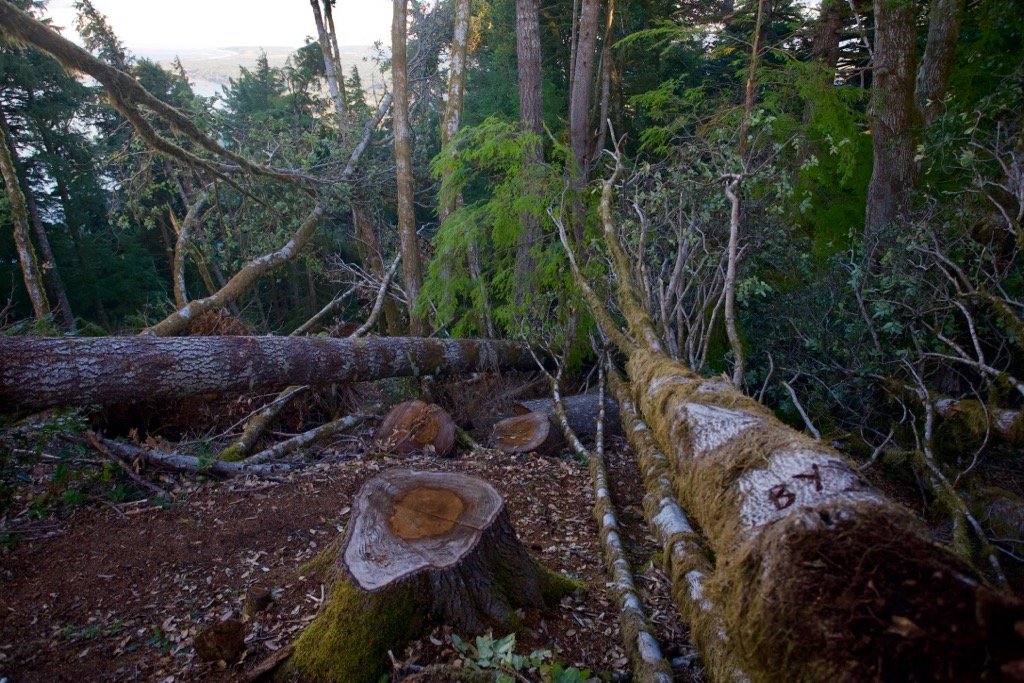 In early winter 2019, the Oregon Parks and Recreation Department (OPRD) cut trees to clear views from viewpoints on the Humbug Mountain trail. For years people had climbed to the top, and some felt disappointed when they did not find a full ocean view (though all the big trees on the hike up have always been worth the hike, as far as I am concerned). I was excited, though trepidatious, to see the new view because through the years I have been aware of many instances when OPRD has been, let's say, over-zealous with its "vegetation management" at our coastal state parks. I know this not only from personal experience but also because I've received many calls from people heartbroken about special places—from Boardman S.P. to Cape Blanco S.P.—that were hacked or cut. In general, I've defended the agency, recognizing their need to maintain trails, though I've wished they'd be more thoughtful and careful. Nevertheless, because Humbug is an important place to me and because I could not attend the local meeting OPRD held to discuss this project, I made a phone call to the park superintendent. I am all for clearing the view, I explained to him, just please make sure to not cut too many trees—please don't make it like a clear cut up there. He told me others had raised similar concerns and assured me that the job was being planned by a forester and would be professional and appropriate, so I didn't worry.

Tim and I first fell in love with Humbug Mountain more than twenty years ago. He was having trouble with his voice and had to go for 6 weeks without talking. It was a personally challenging time, and so we took solace in climbing Humbug Mountain. Since then, I've run into many people who climb Humbug for fitness, for a nature-fix, and for solace. The 3-mile climb to the 1,700-foot summit has a way of making anyone feel good, no matter what.

But when I climbed to the summit after the trees were cut, I joined the ranks of the heartbroken. It felt like a gut punch. The cut to open the view had been laid out like a timber sale, with a straight-line square perimeter. Now the summit meadow, a place I'd personally considered sacred, felt like a two-acre clear cut. This place I'd come so many times to restore my spirit now looked like so many other sheared-off mountain tops across Oregon—desecrated. Others have told me they felt similarly.

Though I did appreciate the more wide-open view, I couldn't help think about how much more beautiful it could have been if only Oregon State Parks staff had training to consider aesthetics. Of course, viewpoints don't consist only of distant scenes, but also of the nearer surroundings. What if instead of cutting trees in a straight-line perimeter (like clear cuts), trees had been selectively cut to create less abrupt edges? What if only the trees obstructing the view had been cut? Professional arborists, landscape architects, and even utility companies carefully consider these matters all the time. How come Oregon State Parks does not integrate such expertise into its "vegetative management"?

Most troubling was the fact that trees behind the view, at the summit, were also cut, exposing unique and big limbed trees north of the mountain top to the force of winds. From the get-go, I had been worried about windthrow. Observing and hearing many stories about timber sales, where wind literally toppled forests exposed after other nearby trees were cut, I was concerned about what would happen to those big, charismatic trees, especially because there had already been some blowdown on the north side a couple of years ago.

Unfortunately, my worst worry came to pass. A big storm in late November blew right through the summit where the trees had been cut, toppling remaining trees, opening a wide swath, and leaving a chaotic mess of blowdown that closed the trail. Now, our perfectly shaped Humbug Mountain—named in indigenous languages for being shaped like a "salmon cheek" —has what looks like a big BPA power line cut 60 feet wide through its top. Ensuing storms have led and will likely lead to even more disturbance and openings and landslides now that the windward grove has been cut down.

After the fact, OPRD claimed it needed to cut those trees at the summit, including a very large hemlock, because they were hazards and could have fallen on hikers. That seems not to pass the laugh test because, of course, there are thousands of trees that might be at risk of falling during our biggest storms. It seems that the agency did not sufficiently consider the risks of windthrow. Cutting the large opening on the summit has made the situation far less stable and less safe for hikers and has created a bigger maintenance problem for the upper trails.

Those of us who love Humbug will now need to find peace with the massive wind damage on the summit, worsened by OPRD "vegetation management" —whether we appreciate the distant view of Humbug from north or south or whether we climb to its peak. Meanwhile, I urge OPRD to take more seriously matters of natural process as well as beauty and even reverence to the experience of residents and visitors who cherish and support state parks.

Ann Vileisis is the President of the Kalmiopsis Audubon Society. Learn more at www.kalmiopsisaudubon.org