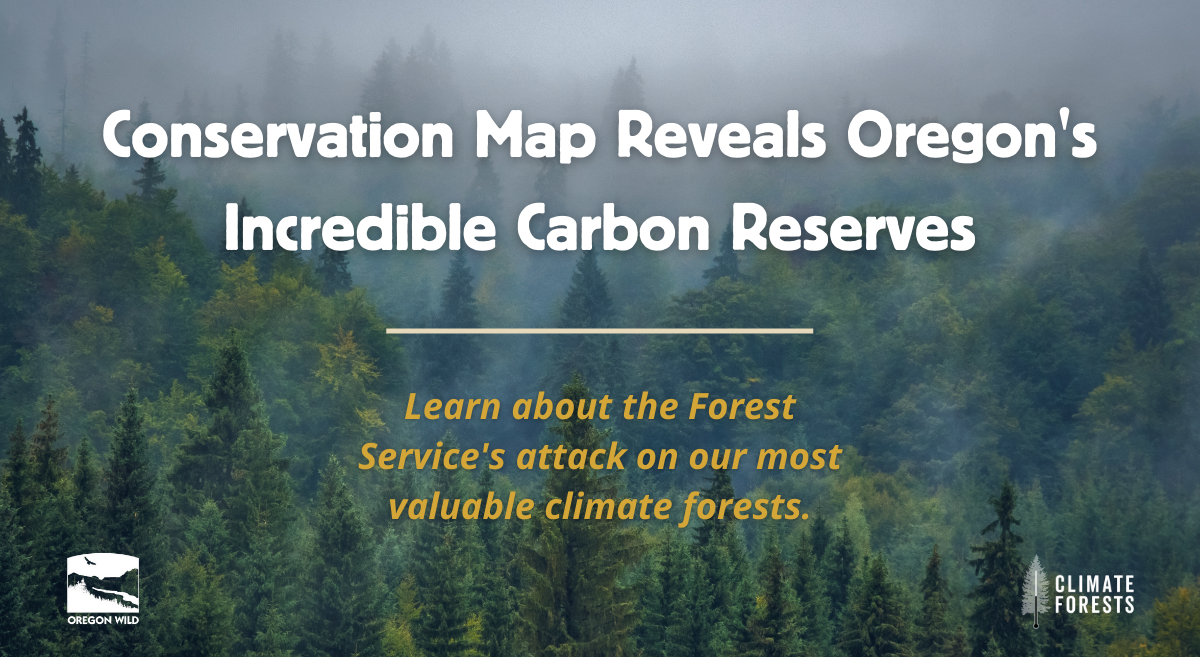 We all love Oregon's lush forests, but now you can also see just how much carbon these giants are storing with the new Conservation Carbon Map!

The impacts of climate change like heatwaves and drought are becoming more severe, and it’s high time we use every resource available to keep planet-warming greenhouse gasses out of the atmosphere. Lucky for us, mature and old-growth forests are working overtime to do just that. Did you know that United States forests take up about 10% of our carbon emissions each year? That’s millions of tons of carbon trapped by the roots, branches, trunks, and soils of our forests. Unfortunately, when we log these forests, most of that carbon goes straight into the atmosphere. Even if we plant new trees, it will be decades to centuries before they take up all that carbon again–time we don’t have in the fight against climate change.

Don’t take my word for it, check out the Trust for Public Land’s “Conservation Carbon Map” (you will need to create an account for access). With this interactive tool, you can see the distribution of carbon in public and private forests across the contiguous 48 states. It uses a simple color-coding scheme that labels the most carbon-abundant states in dark green, and the least carbon-abundant in light green. You can look at U.S. forests in terms of just public federally-owned and managed forests, just privately-owned and managed forests, or both together. So what does it tell us about these forests? 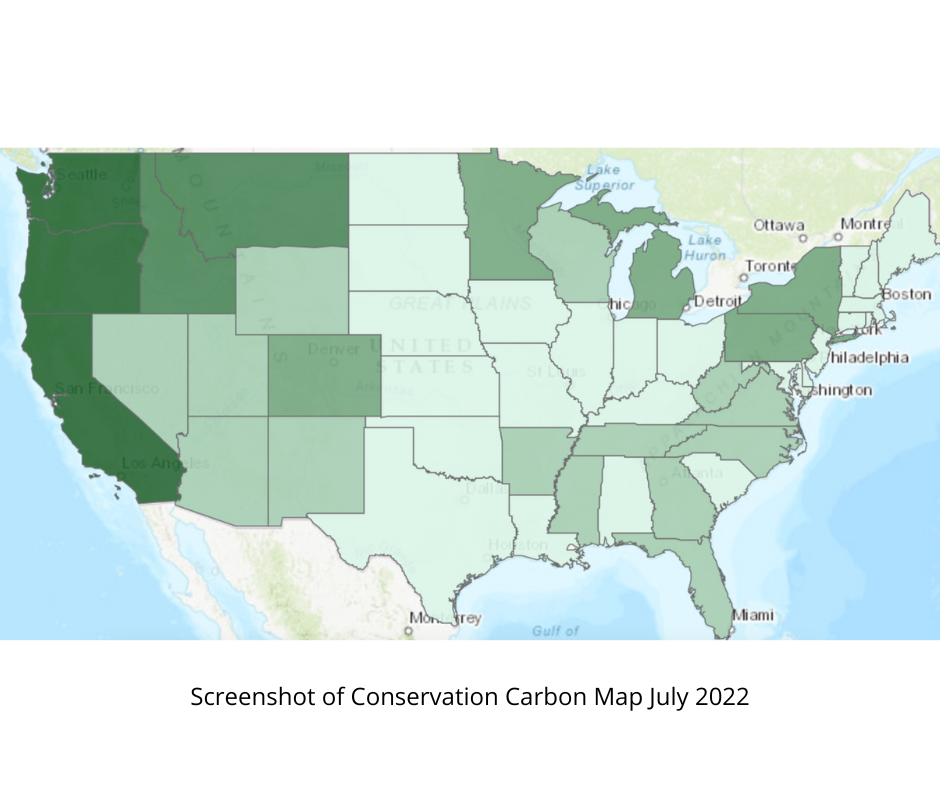 The map makes it easy to visualize the massive amounts of carbon that U.S. forests capture and store just by letting them grow instead of logging them. You will notice at first glance that only Washington, Oregon, and California are colored the darkest shade of green. That’s thanks in no small part to the amazing carbon-storing forests on our public lands! In fact, West Coast forests seem to blow the rest of the country out of the water.

Oregon tops the list, with over 3.5 billion tonnes of carbon currently stored in its forests–that’s equivalent to burning about 14 trillion pounds of coal! What’s more, Oregon’s forests trap and store an additional 16.4 million tons of carbon each year. These are no small sums. You would have a hard time finding a carbon capture-and-storage method that’s as cheap and efficient as the natural processes of Oregon forests. And because this carbon is largely stored on public lands, the American public has a say in how those lands are managed. In fact, Oregon, above any other state, has the most carbon stored away in public forests. Even though national forests have more stringent protections against logging than forests on privately owned land,  these protections are not enough. 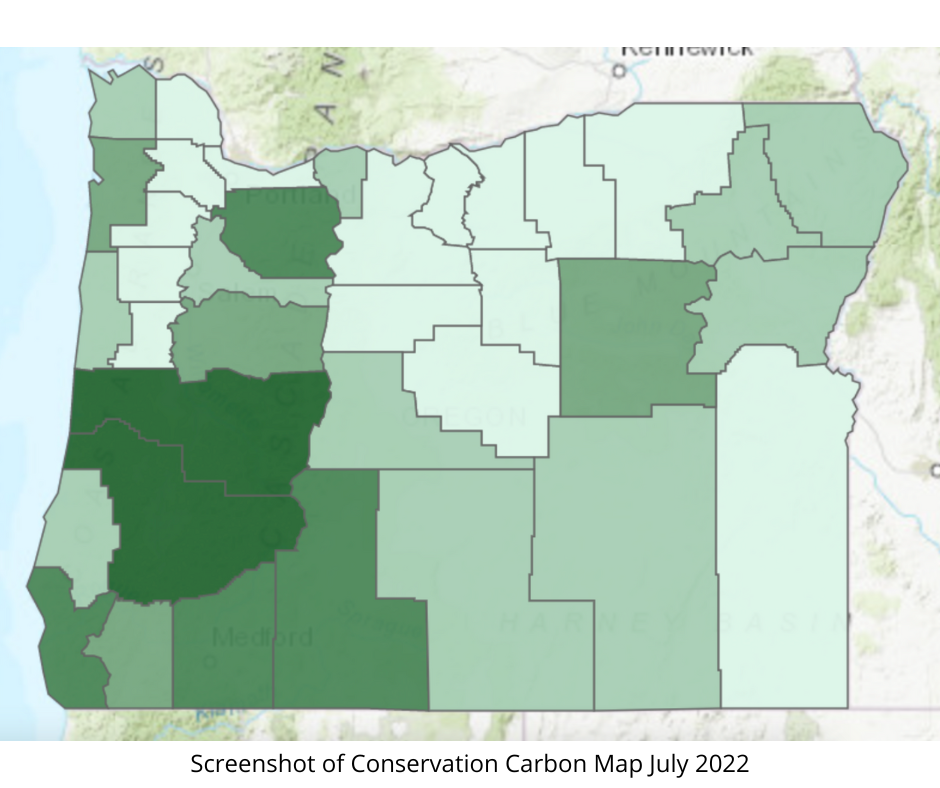 When you click on a state, the map will further break down the distribution of carbon reserves by county. In Oregon, the most carbon-abundant county is Lane County when considering just public forests. This County is also the site of a recent timber sale, known as the “Flat Country Project”. The project, proposed and approved by the Forest Service, will clear 5,001 acres in total, including 1,000 acres of mature Douglas-fir and hemlock stands. What the map won’t show you is the exact location of the timber sale or how much carbon it would release into the atmosphere. However, it does expose that the Forest Service, a federal agency, has no qualms planning a logging project in one of the most abundant carbon reserves in the United States. 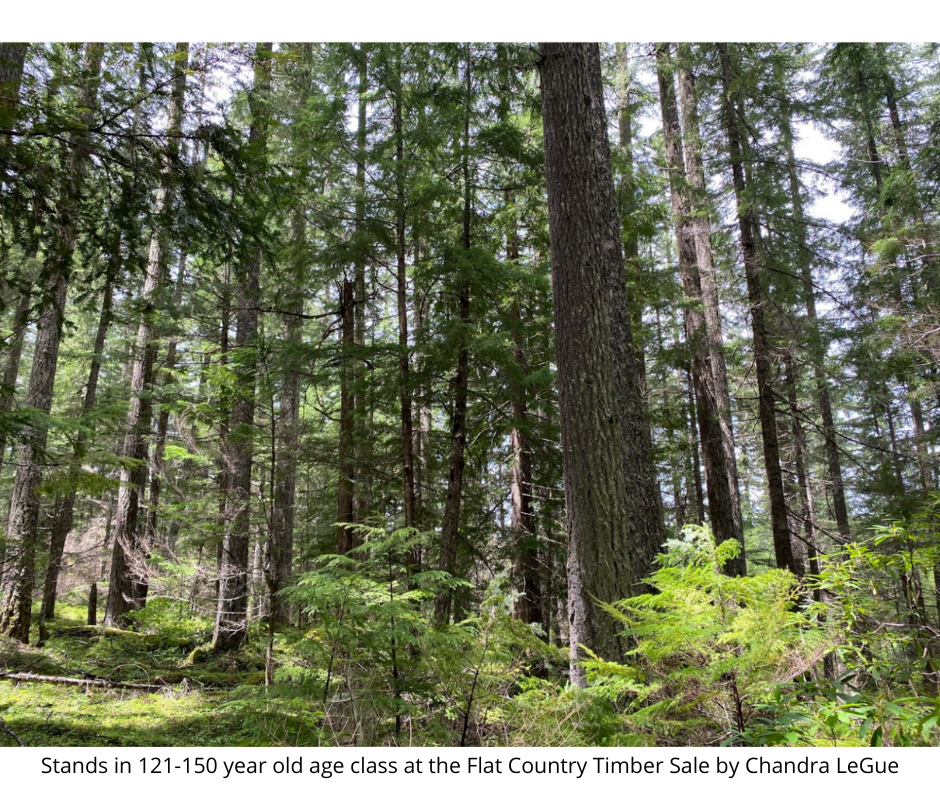 Maybe one timber sale isn’t much when you consider the millions of acres of forests under government control. However, Flat Country isn’t the only logging project slated or underway on federal lands. For instance, try clicking on California. At the top of the state lies Siskiyou County, highlighted in the darkest shade of green.  The Klamath National Forest located in this county is the site of another Forest Service timber sale, the “Bear Country Project”. It encompasses 40,000 acres of forest, including 2,000 acres of mature and old-growth trees. That’s thousands of acres of forest threatened in another one of the United States’s most carbon-abundant counties.

The Conservation Carbon Map demonstrates the vital importance of the West Coast’s carbon caches for tackling climate change. So next time you hear about a timber sale in Oregon or anywhere else in the country, try finding it on the Conservation Carbon Map and see for yourself what valuable lands our own government agencies continue to threaten. If your findings happen to spark outrage, take action! President Biden needs to follow through on his promise to protect America’s mature and old-growth forests. Demand that he stop the Forest Service from destroying our country’s most critical carbon caches and insist that forests are worth more standing.

Check out the new Worth More Standing Report 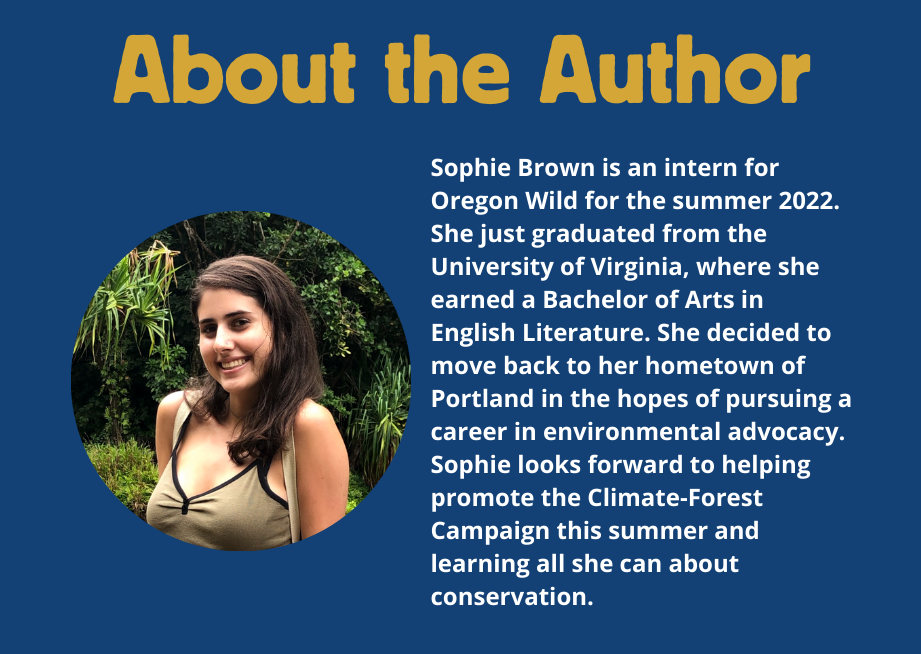