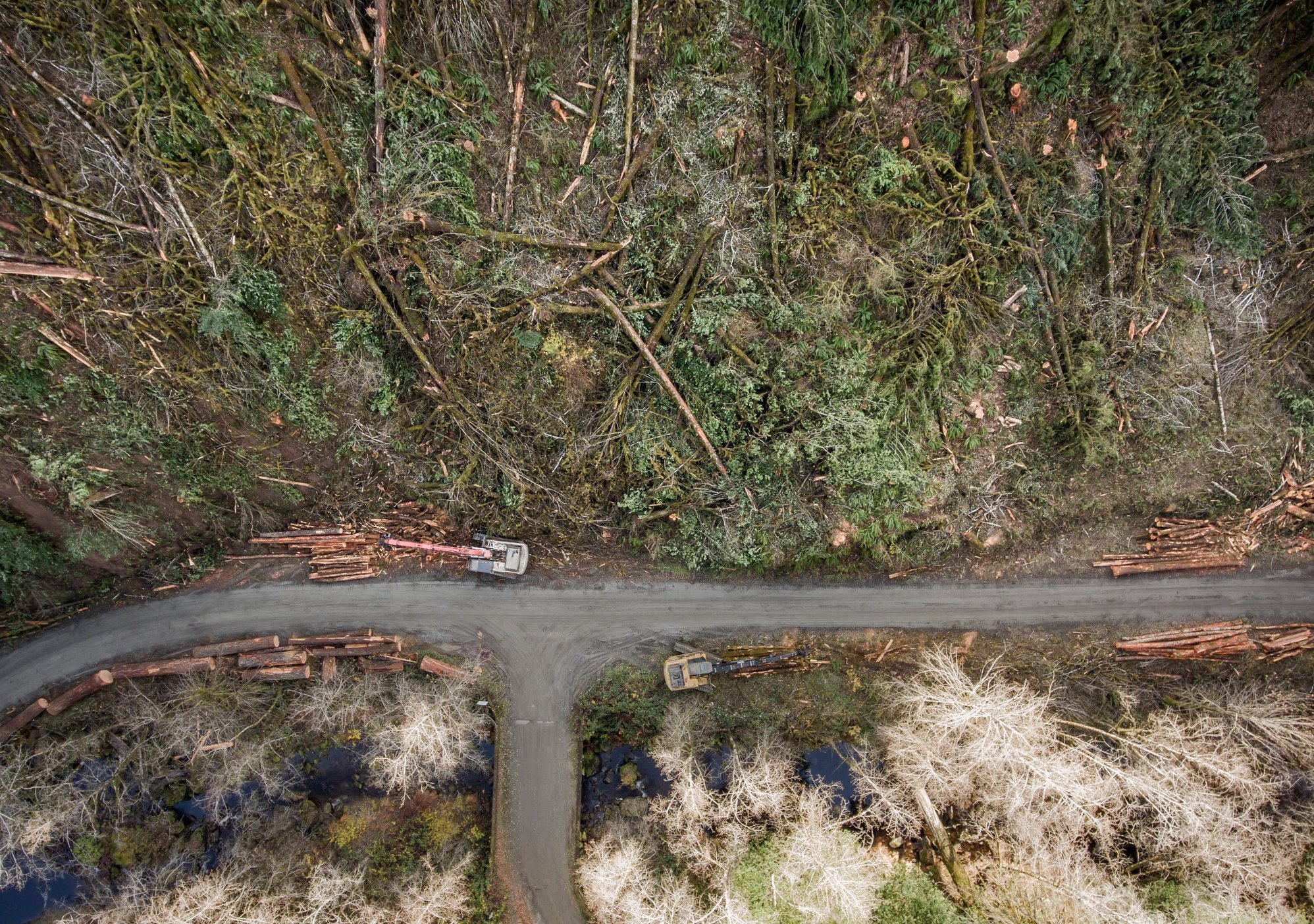 What good are laws if they do not serve their intended purpose?

This is a Guest Blog, written by Micha and Dan of Myrtle Glen Farm, outside of Coquille, Oregon

Currently, a clear-cut along the East Fork of the Coquille River is putting to test the laws that dictate the Oregon Forests Practices Act.  These outdated laws are supposed to prevent sedimentation in rivers, protect landslide prone areas from washing out roads, and keep waterways shaded and cool for salmon and steelhead spawning.

Let’s be clear, Weyerhaeuser, the corporation responsible for this operation, is likely operating under the letter of the law.  And this makes it a particularly egregious example of why our laws bend to the weight of corporate dollars instead of the science that illuminates healthy forest hydrology and salmonid habitat.

A prime example of science that is ignored by current law is the Jones/Perry landmark study out of OSU in 2016 that found 50% more water flows in mature forests than their monoculture plantation counterparts.  The scientists have found that mature forests are better equipped at handling water, buffering the heavy downpours throughout the winter, and slowly releasing more water during the warmer months.  More water in the summer means cooler and cleaner rivers, which is what young salmonids require for survival. 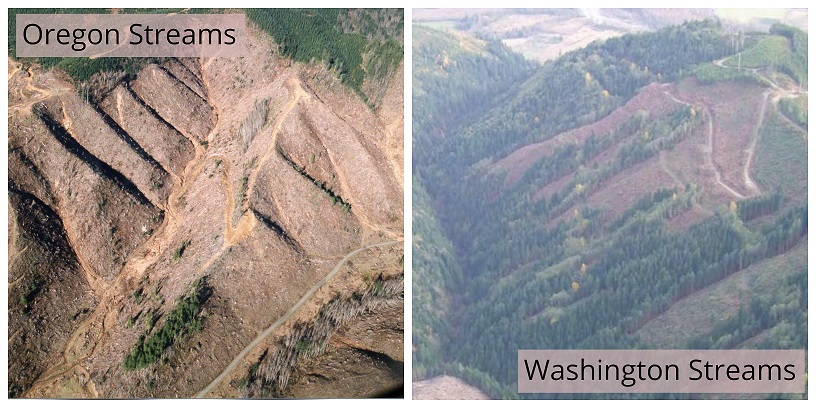 The other way waterways are kept cool during the summer is by shade.  The main purpose for Oregon’s buffer regulations is so that we can keep these stream temperatures down.  But what we’ve seen with our eyes on private industrial plantation land along fish-bearing rivers are long stretches with little-to-no riparian, post clear-cut 35 year old conifers packed so tightly there is no understory foliage to block light, and only 20 feet of streamside is protected from logging. Neighboring Washington, for comparison, calculates riparians horizontally from the waterway -- meaning they don’t measure up hillsides -- and gives anywhere from 80 to 215 foot harvest buffers.

The clear-cut along the East Fork of the Coquille River is incredibly steep terrain, some of which is considered a landslide hazard zone.  It is a mixture of old-growth forest, steep hardwood riparian, and some middle-aged conifers.  The cut is along (what was) one of the most stunning stretches of a scenic corridor known as Coos Wagon Road.  Fortunately, a few trees were left standing directly above East Fork Falls, but Weyerhaeuser hacked away at the hillsides flanking the falls on the southern ridges.  The end results are massive old-growth trees gone, a couple long stretches with no trees along a large fish bearing stream, and an exposed mountain bearing down, unencumbered, on this stunning river.  Even if this raw hillside does not send a massive landslide into the river, it will deposit huge amounts of topsoil during every heavy winter rain, especially considering that there aren’t any trees in the buffer zone.

And guess what’s going to happen when they spray toxic pesticides from a helicopter along a river where there are no trees? Those toxic chemicals will likely end up in that very waterway, impacting the fish, wildlife, as well as the humans that rely on that water to drink and play in.

Lastly, there’s something to be said about the economic viability of keeping forests intact.  Our business, Myrtle Glen Farm, is predicated on having healthy forests and waterways.  We live along one such waterway and watch it’s muddy winter waters and sparse midsummer trickle.  These are waters which support our garden which in turn brings tourists into the heart of the Coos County Coast Range to enjoy the farm and forest.  Furthermore, we frequently send our visitors along the Coos Wagon road to take in the aesthetic beauty of East Fork Falls along their way to the farms and wineries of Douglas County.  This is a viable economic corridor and we must consider that some stretches of old-growth are best left untouched for that reason alone.

So, what can we do about this? We can use modern science to update Oregon’s logging laws, written in 1972, we don’t deserve to have the weakest laws in the region.  It’s not an issue about timber jobs or stopping logging.  It’s an issue of logging responsibly to improve water quality and fish habitat.  We are board members of the Coquille Watershed Association, and while we don’t speak for the association, we do recognize a majority of our streams are not healthy.  Under Oregon’s outdated laws, the work of these non-profit organizations will never be enough to repair stream temperatures, dissolved oxygen, disturbed habitat, high turbidity, landslide danger, summertime quantity.

If laws are modernized to require loggers to leave enough trees to protect streams, allow less clear-cutting on landslide prone areas, and protect waterways from helicopter spraying of pesticides, we might start to see both healthy forests while also maintaining a functioning timber economy. That’s why we are working to pass the Oregon Forest Waters Protection Act - and we hope you will join us as we fight to give Oregon voters the chance to protect our forests, our streams, and our communities. Working forests are an important part of Oregon’s culture, and if we don’t protect them for future generations, Oregon’s forestry has no future.

If you live in Oregon SIGN UP HERE to volunteer to support the Oregon Forest Waters Protection Act! We will send you an email when there’s a way for you to pitch in.