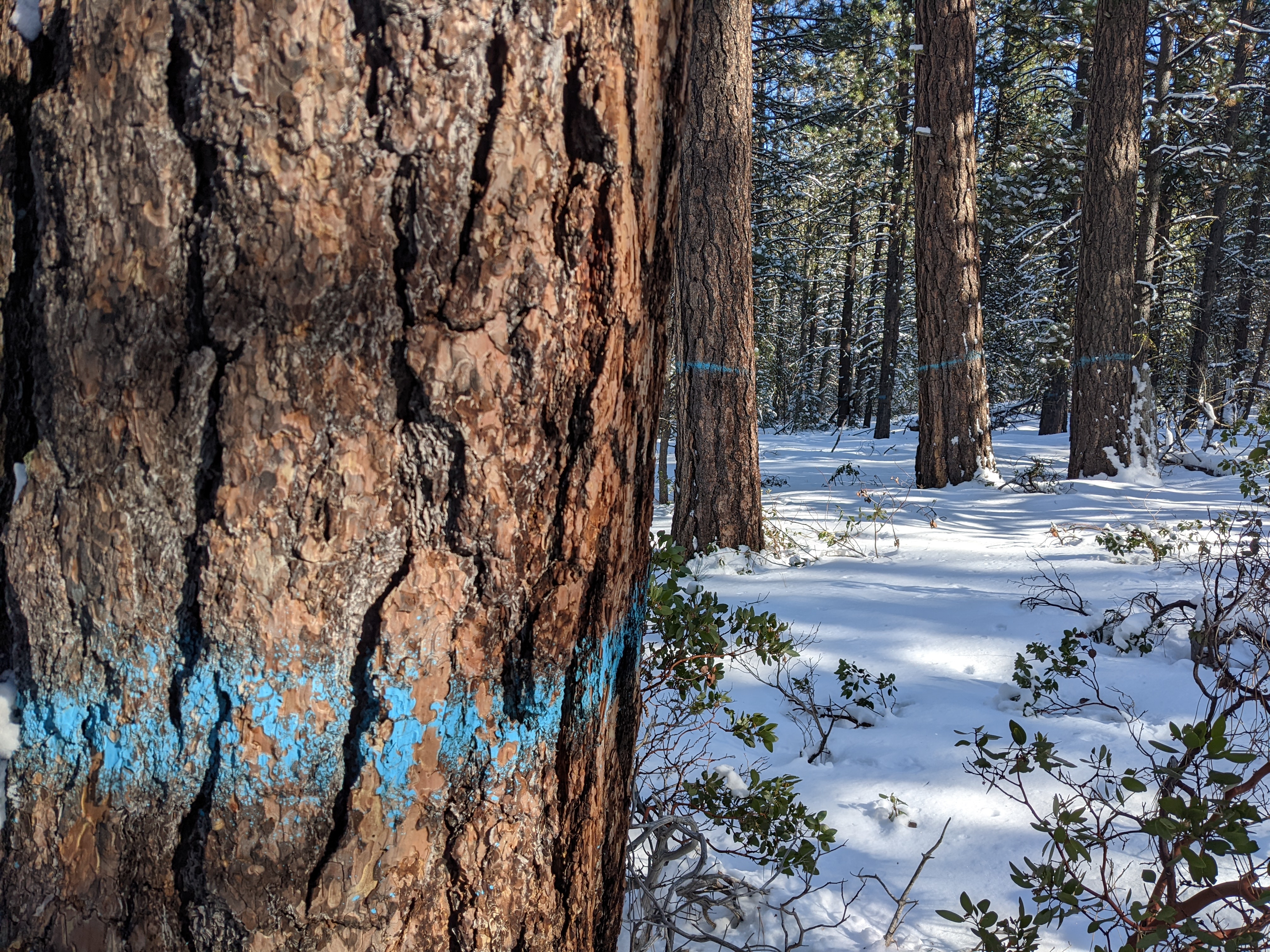 Don't cut down the last old-growth we have left. It’s as simple as that and has been for Oregon Wild’s mission for nearly 50 years.

For years, the Forest Service and the Deschutes Forest Collaborative have told Oregonians that everything is hunky-dory.  We should know. Oregon Wild has been a member since its early days as a forum where community stakeholders come together to find common ground regarding how public lands within the Deschutes National Forest should be protected and managed.  But like forest collaborative groups in other regions, in recent years this outfit has shifted from “how can we do what’s right for the lands we love'' to “how can we increase the pace and scale of logging.”

This problem has now come to a head as we just learned that the Forest Service plans to log old-growth trees along the Pine Drops trail (Phil’s Trail network), one of the most popular mountain biking trail networks in Oregon.  Trees over 100 years old and up to 32” in diameter along the trail are slated for logging.  The Forest Service and collaborative seem more concerned about meeting logging goals than protecting these old-growth trees, or this popular trail.  When Oregon Wild challenged the collaborative over this, the response was a shrug from most.  The group has “pace and scale” logging goals to meet, and old-growth trees are acceptable collateral damage.

Background
Almost twenty years ago, Oregon Wild, the Forest Service, and other stakeholders came together to find common ground on the Deschutes National Forest. One of the initial logging projects was called “Glaze Meadow”. It was a kumbaya moment that resulted in legitimate ecological restoration, including thinning that sent small logs to local timber mills. Old-growth trees were protected, meadows and wetlands were restored, and recreational opportunities were preserved.  The goal was that lessons learned from this project could be carried forward and built upon. But 15 years later, local collaboratives have lost their way.

Logging in the “West Bend” project
A member of the public enjoying the Phil’s Trail area became alarmed when they noticed blue paint marking old-growth trees near the trail recently. This part of the forest has very few big old trees left due to aggressive logging years ago, so these remaining large trees are all the more important for wildlife, not to mention carbon storage and scenic values.

The West Bend logging project has been blessed by the Deschutes Collaborative as a “good” project.  This logging was pitched as reducing the risk of fire. There’s plenty of debate about the efficacy of that, but in some places (i.e. around homes communities in dry forest types) it can be smart to thin the small flammable trees in order to preserve and restore more fire-resilient old-growth. The larger trees have thicker bark that serves as armor against fire.

Today, the science is crystal clear that logging the fire resistant old-growth trees and leaving smaller trees actually makes fire dangers worse, yet that is exactly what is happening in the West Bend project.

And there’s the rub.  The West Bend project is billed as being “fuels reduction” and forest restoration.  While those are laudable goals, there’s nothing “restorative” about logging old-growth and making fire risks worse.  Fifteen years ago, when we helped the Forest Service design the Glaze Meadow project, we started with the premise that we should save all our remaining old-growth, and manage the forest to restore more big trees over time.  With the West Bend project, the Deschutes Collaborative has lost its way.

Advocates like Tim Lillebo fought long and hard to ensure the collaborative model had a foundation of not logging old-growth. Rest his soul, he would not like what he’s seeing.

And to make matters worse, Congress and the Oregon legislature are directing millions of taxpayer dollars to fund more so-called fuels reduction projects.  Many have argued that the West Bend project is a model for how this money is spent.

Collaboration?
The West Bend project was developed by the Forest Service with input from the collaborative. We never expected it to be a great project but we trusted it wouldn’t turn into an old-growth logging project, or that it would harm scenic and recreational values.  The formal collaborative recommendation to the Forest Service several years back was: “"Due to their infrequency in second-growth stands, retain old-growth characteristic trees of all species...".  Oregon Wild strongly supported that guidance.

But this recommendation is not being followed as old-growth ponderosa pines are slated for logging. When we brought these concerns to other members of the Deschutes Collaborative, the collective response was a shrug and an “good enough” vibe from the majority of its members. This response follows a trend of the collaborative failing to hold the Forest Service accountable for fulfilling the ecological restoration goals and highlights the collaboratives focus on “pace and scale” of logging rather than on protecting old-growth, wildlife, and carbon storage on public lands.

Problematic Track Record
The system of collaboration, lack of quality control, and incentives that result in logging outputs being prioritized over wildlife, carbon storage, and other values is broken. Here are a few recent examples we’ve seen on the Deschutes National Forest that are troubling.

It’s notable that the Sisters Ranger District of the Deschutes National Forest has a better, albeit not perfect, track record compared to the Bend-Fort Rock District.

Solution
To restore the public’s trust the USFS needs to commit to stop logging large and old trees on all active projects using a strict diameter limit. No ponderosa pine trees over 21” in diameter at chest height, and no fir or other large trees over 24” diameter. This isn’t a perfect metric, but it is a heck of a lot better than the approach the agency has embraced with West Bend. Sign the petition asking the Forest Service to stop logging old-growth.

The Deschutes Collaborative needs to remember why it was founded.  It does not exist to serve as a rubber stamp for the Forest Service, or to promote the “pace and scale” of commercial logging.  It exists to provide a forum for people to help guide the Forest Service on how the public lands that we all love should be managed.  That it has given it’s blessing to logging old-growth ponderosa pines along one of the most popular recreational trail networks in Oregon is an undeniable sign that it has lost its way. 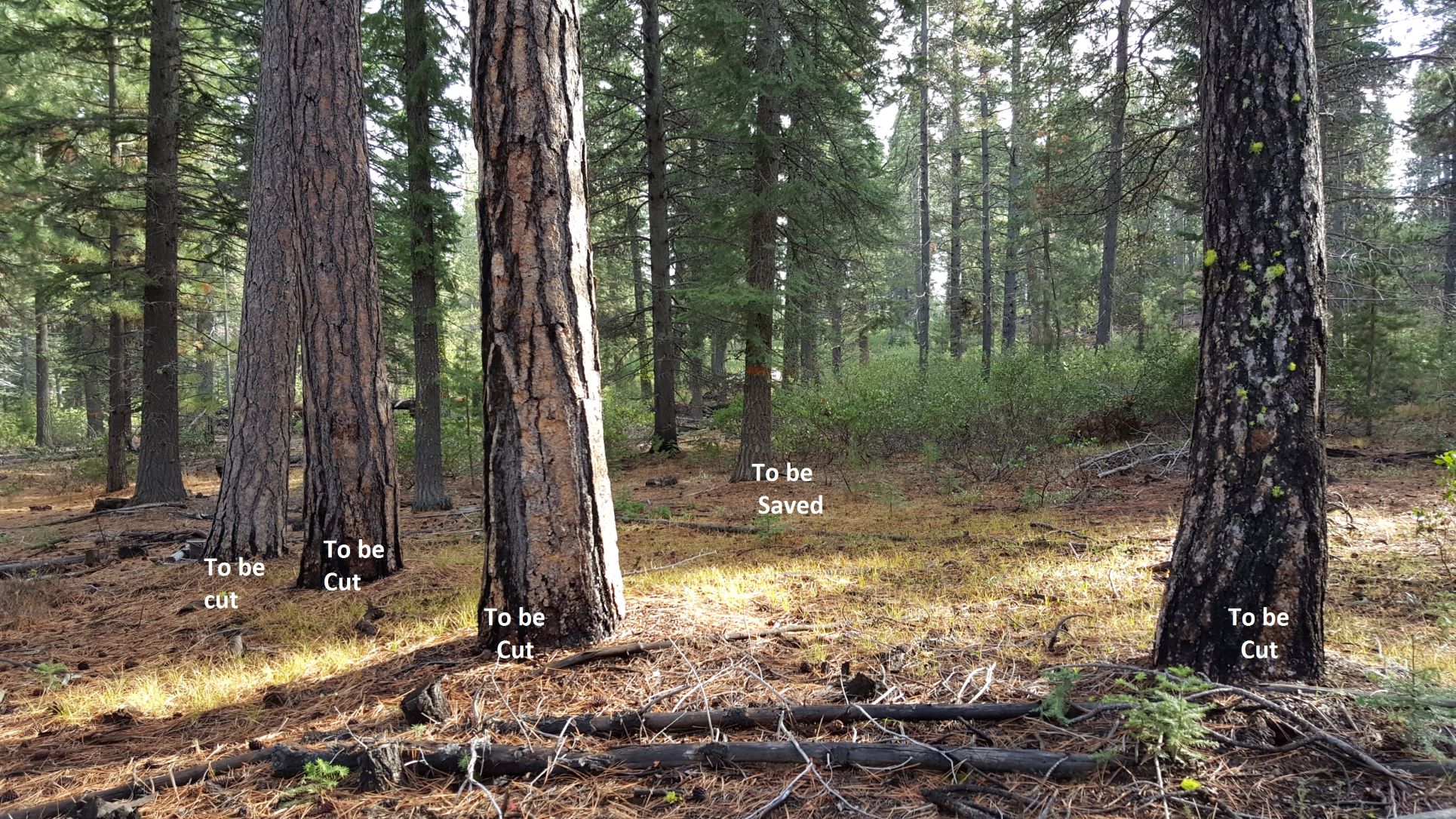 These trees were spared and not logged after Oregon Wild worked with the Forest Service to save them at the last minute, several years ago. This is the same project as the Phil's trail incident in 2022 but a different area that was in the crosshairs several years prior that had a happier ending then the Phil's Trail logging.