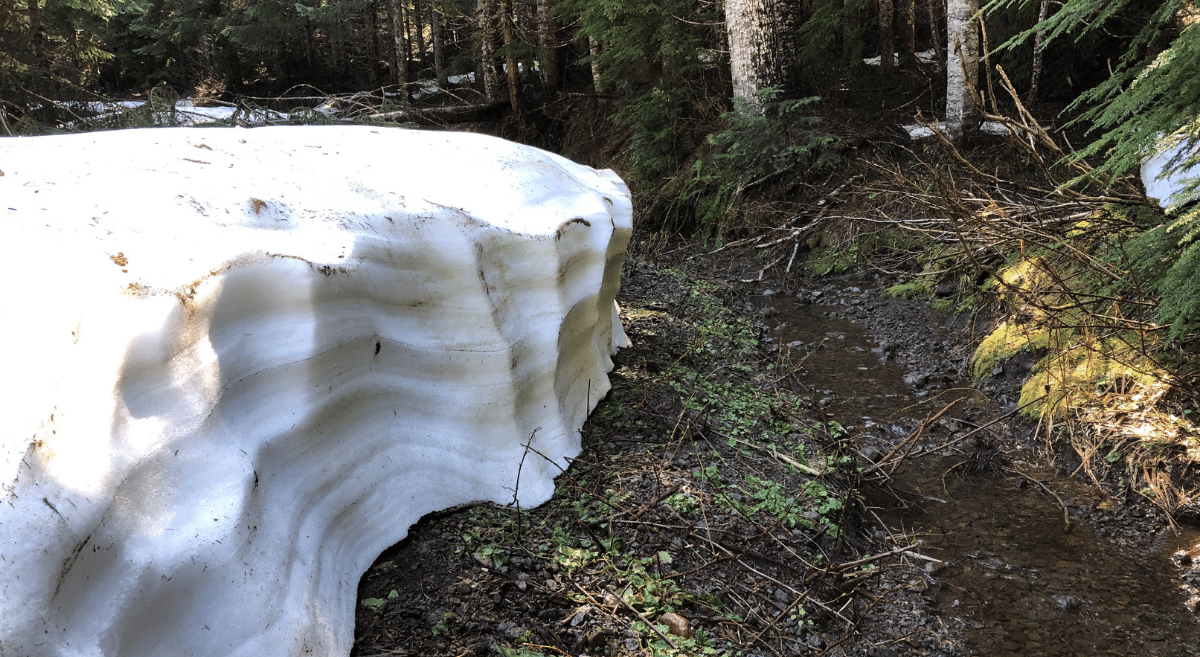 Guest blog from Bobbie Snead, author of the Northwest Nature blog.
-------------
A watershed is a trough in the earth’s surface in which all waters flow to a common stream. But a watershed is more than just flowing water. Everything living in a watershed is part of its identity; a stream and the land that it drains from a living community where all the inhabitants are linked by the common watercourse. Stream and watershed are one and the same.

I spent a year exploring the Hackleman Creek Watershed, at the headwaters of the McKenzie River, getting to know its uplands, valley, and seasonal lake. As watersheds go, Hackleman Creek’s basin is tiny: the creek flows only six miles from 4,236-foot Tombstone Pass east to Fish Lake. The watershed occupies a mere twelve square miles of sloped terrain. Its landscape is on an intimate scale, but troves of rich biological diversity and geological complexity lie within its perimeter. A cluster of five eroded volcanoes (Iron Mountain, Cone Peak, South Peak, Echo Mountain, and North Peak) rises to nearly 6,000 feet along the northern edge of the watershed. Seventeen kinds of conifers grow on their steep slopes, a greater diversity of trees than anywhere else in Oregon. Botanists have identified 300 species of wildflowers here, including 60 species rare to the region. 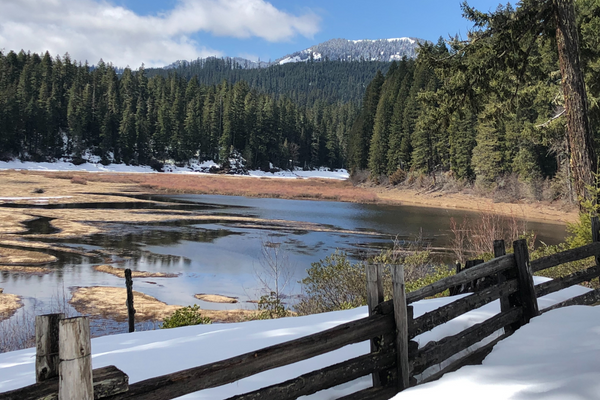 The curved Echo Mountain ridge embraces an amphitheater-shaped sub-basin carved by glaciers in the last ice age. One sparkling summer morning just after sunrise, I had Echo Basin all to myself, or so I thought. Afterward, I wrote in my journal:

Arriving at a meadow bursting with knee-high bracken ferns, I get a glimpse of the valley’s headwall and then spot something much closer. Twenty-five yards away, a young black bear wades through the lacy fronds and stops. Ears pricked and nostrils flared, it looks my way. About the size of a Labrador retriever, it’s probably a yearling female. The mature sow who lives in this valley has raised at least two sets of cubs here. She will allow her young daughter to establish a territory partially overlapping her own, while her sons will travel miles from their natal grounds to claim their territories. This youngster’s muzzle is cocoa-brown and the sleek black fur on her head is slicked down; she looks like a diver who just climbed out of a swimming pool. Perhaps she took an early dip in the small lake just over the ridge in the neighboring watershed.

Black bears have keen memories about food; this bear may be revisiting some of the feeding spots her mother showed her last summer. It’s possible she has spent the morning on the high slopes above the valley digging up the roots of Hall’s lomatium, a plant with delicate yellow flowers and parsley-like leaves. She may be on her way to raid an ant nest for nutritious larvae --unknowingly ingesting wild ginger seeds discarded by the ants after they consumed their sweet outer coating. She could be checking on the ripeness of the devil’s club berries, always prized by black bears. She’ll spread the seeds of numerous plants in her scat as she forages across this valley. New plants will sprout one day to feed her and her future offspring in a food web that connects wild ginger, ant, devil’s club, and black bear.

A late-winter snowshoe trip brought me into a drippy old-growth forest. I wrote:

Thousands of water droplets sparkle on the trees. I focus on a single liquid pendant clinging to a Douglas-fir needle; it’s in no hurry to meet the ground. As I watch the drop finally give in to gravity and fall to the snow, I think about how it got here.

Plummeting from a cloud base 2,000 meters above the ground, the raindrop’s fall took no more than four minutes. Before that, it may have spent years sloshing around in the sea. Maybe it passed through the gaping mouth of a basking shark or rinsed the salty rim of an orca’s blowhole. Solar heating lifted it into the atmosphere, where it condensed into a cloud; warm ocean wind pushed the freighted cloud, along with others, a hundred miles east to the windward slope of the Cascades, turning raindrops loose to drench this forest. Tonight, the little droplet will likely become an ice crystal consolidated in the snowpack. Later, spring’s warmth will send it on a short trip to Fish Lake in snowmelt currents. There, it may trickle through porous volcanic soil to enter the neighboring Clear Lake basin via an underground passage or evaporate from the lake in summer’s heat. This one raindrop is on an eternal journey in the endless cycle of all water on this wet planet. 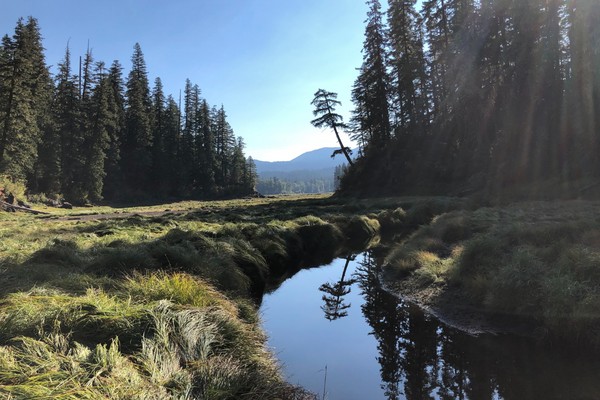 In my twelve months of exploring the Hackleman Watershed, I learned many things, but one significant truth stands out: everything flows together in a stream of connected being. Water unifies all.

In February 2021, Senators Ron Wyden and Jeff Merkley introduced the River Democracy Act in the U.S. Senate, legislation that would add 4,700 miles of Oregon’s streams to the National Wild and Scenic Rivers system. This legislation would protect critical watersheds for communities, fish and wildlife. Hackleman Creek, a headwater stream of the McKenzie River, is included in the River Democracy Act. Please join Oregon Wild in supporting the passage of the RDA in 2022.

Bobbie Snead fell in love with nature at a very young age. As a life-long naturalist, she's had professional stints as a park naturalist, wilderness leader, and environmental educator. Currently, she is part of an environmental education/field study team that teaches stream ecology, mountain snow studies, old-growth forest science, and beach ecology to students in grades K-5. Her passion is awakening a sense of wonder in others. She does this by leading hikes, writing, and teaching. She wrote a nature column for Salem’s Statesman Journal newspaper for three and a half years; now she focuses her nature writing efforts on her blog. She's on the trail at least fifty times a year; her longest hike was a 400-mile solo trip on the Pacific Crest Trail.