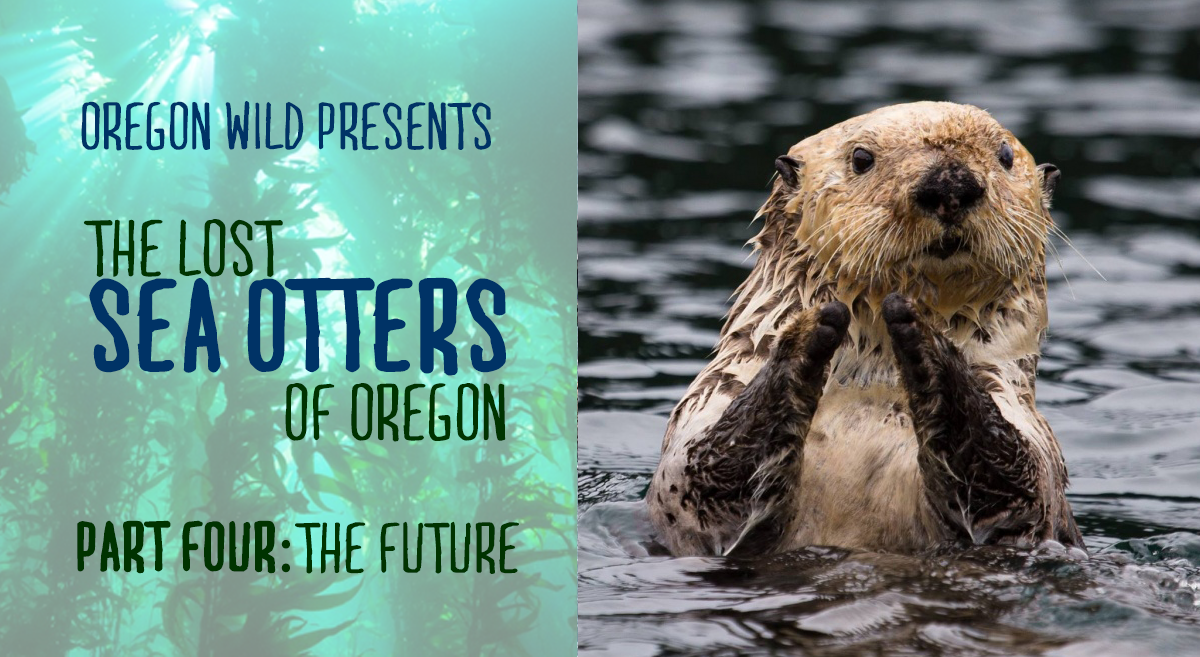 Scientists, tribes, community leaders and other experts seem to think that opportunity is closer than we realize.

Bailey “Our organization is called the Elakha Alliance. Elakha is the Clatsop Indian, Chinook Indian word for sea otter.”

This is Bob Bailey again. He’s been working with other stakeholders to continue the legacy of David Hatch. Hatch founded the Elakha Alliance decades ago to explore the return of sea otters and their possible benefits to the Oregon coast.

Robert Kentta is also a board member of the Alliance. He talks about the idea that sea otters may be considered more than just a keystone species.

“When we hosted our Elakha Alliance symposium, one of the presenters used the term ‘ultra-keystone species’ in reference to sea otters. It was the first time I heard that for any species. She went on to explain that sea otters not only help maintain that ecosystem, but they actually create it,” Kentta explains.

Bailey adds, “As we now know, sea otters are a keystone species in the nearshore ecosystem. They make it entirely possible for kelp forests to flourish, and we know that kelp forests are huge contributors to biological productivity. They buffer and slow down water masses, retain eggs and larva, provide places for young fish to hang out. At the surface, they provide feeding areas for birds. As we can think about kelp forests being the analog to coastal forests, when they’re there they provide for an immense array of biological relationships that contribute to productivity. So when those forests are not there, that productivity is gone. And sea otters made it entirely possible for that to happen.”

But without otters, the environment changes dramatically. Herbivorous sea urchins, with no natural predator, ravenously decimate kelp forests, denuding the seascape. And many of the other marine species that depend on the kelp forests suddenly become vulnerable. An ecosystem that has developed over millennia is thrown out of balance.

However, when sea otters return to the coasts, like what we’re seeing happen in Washington, the urchin population is kept in check, allowing kelp forests to thrive, and the other species that rely on them to rebound. And the body of evidence illustrating the benefits of kelp for nearshore ecosystems is expanding quickly. 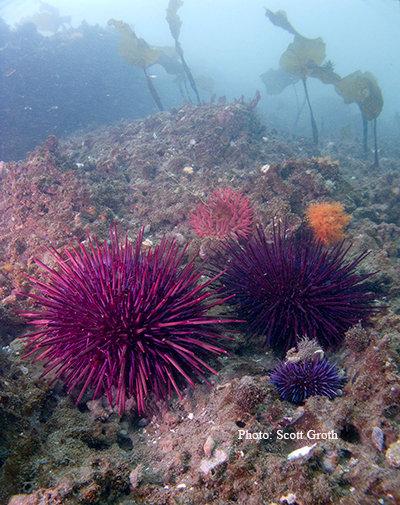 Kone shares, “There could be a whole other suite of benefits - habitat restoration, they can provide habitat for nursery for some fish species, that may be of commercial or recreational importance.”

In fact, by helping restore kelp forests, sea otters may be key to combating the greatest threat we now face: climate change.

“There is also some speculation that, with the replenishment of kelp, they may be able to sequester more carbon than if the kelp forest wasn’t there,” Kone adds.

Just like forests on land, kelp forests have the potential to trap and store vast amounts of carbon, helping sequester it out of the atmosphere. As sea otters restore balance to nearshore ecosystems, the recovering kelp forests could help absorb the greenhouse gases that are quickly warming the planet.

But such a transformation of the nearshore ecosystem could take decades, and sea otters likely won’t be arriving on their own anytime soon.

Moser says, “Unlike other species, such as wolves, sea otters do not regularly travel long distances to establish new habitats, or, as biologists would say, they are not natural dispersers. They tend to stick near their home territories and the established social structures of their floating colonies. Though there have been some sightings off the Oregon coast.”

“People do occasionally see sea otters along the Oregon Coast. There was recently one at Cape Arago, near the mouth of Coos Bay. We’ve seen them from time-to-time near Depoe Bay.  It’s thought that these animals are stray adolescent males, drifting southward from the population along the Olympic Coast -- on the theory that the southward movement of the California current along our coast facilitates them moving southward. Plus that population on the Olympic coast is much closer to Oregon than the population in California which is way south of San Francisco Bay. And that’s a long long distance to go,” details Bailey.

Given enough time, sea otters could eventually make their way back to the Oregon coast.

The alternative would be an active reintroduction. Unlike the failed translocation of sea otters from Alaska, a modern attempt to reestablish sea otters would need to be more deliberate than simply dropping them off the Oregon coast and wishing them well. One of the key questions scientists are grappling with is where the source population of these otters might come from - the California sea otters or the northern population - and how they might be compatible with Oregon’s coastal habitat.

Dom has been diving into this issue.

“The assumption there is that one of the subspecies, either northern or southern, may be better suited to live on the Oregon coast, based off of genetics and which type of habitat they’re more used to. But if we actually look at the previous genetic studies that have been done on archeological remains of sea otters in shell middens along the Oregon coast, we find that there is more of a genetic gradient -- there are both types of genes that originated from the northern and southern populations. So it’s hard to tell whether or not, based off the genetics, that either one would be better suited to live on the Oregon coast just because there are some mixed results in the literature. But there could potentially be an argument for introducing otters that are more used to types of habitat features or environmental conditions that we find in that source population,” Kone states.

However, before the mechanics of a reintroduction can be discussed, a comprehensive feasibility study must be completed first. This study would take a look at the overall impact a reintroduction would have on coastal ecosystems, economies, and communities.

Bailey explains, “There are some of the current ocean users who would be concerned about reintroducing sea otters. Sea otters feed on shellfish, and if sea urchins are available, that is their preferred diet. But there are commercial urchin divers on the south coast, who may likely be concerned about sea otters showing up and taking what they now catch. Similarly, the crabbers might be concerned because sea otters eat crab.

As is the case with any reintroduction of a native species back to its historical ecosystem, there is a lot of work to be done to engage local communities that may be impacted by their return. While it’s still unknown just how much sea otters could affect the various commercial and recreational fisheries, opening the lines of communication will be vital as this process moves forward.

It’s still unclear just what the future holds for sea otters in Oregon. But what we do know is that the public has an important role to play.

“For the public, they are stakeholders themselves, and their opinions, their values do matter, and their voice and their opinions are something that managers are interested in hearing about. I think the general public has a great potential to be advocates, whether or note they are in favor or oppose a sea otter reintroduction,” adds Kone. 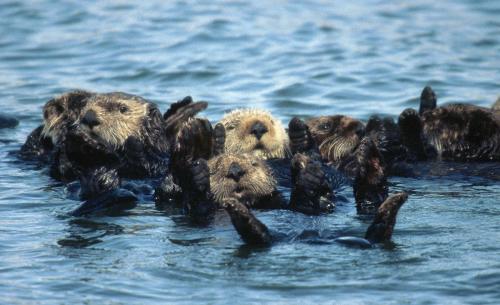 “We are facing all sorts of challenges, risks and losses, not just of our economically important species, but the collapse of food chains. And when you’re facing those sorts of risks or challenges it’s always best to look toward bolstering, reinforcing that resilience of those communities and habitats. Hopefully the public sees a value in understanding that, learning more about it, and through that will lend their support to sea otter reintroduction as a way of building resilience against climate change effects and general losses of habitat and resources populations,” Kentta explains.

Success may also require thinking on a longer timeline.

Hatch concludes, “Sea otters have only been gone from Oregon for the blink of an eye, they’ve been gone since a few years before my grandfather was born and my hope is that by the time I have grandchildren they’ll be able to go to Port Orford or Cape Arago and see sea otters playing off the coast just as my ancestors always had. I think it’s important we don’t get overburdened by the daily and yearly challenges that we face in conserving our natural resources, and begin to think multi-generationally about the things we want our grandchildren to experience.”

We hope you've enjoyed The Lost Sea Otters of Oregon series. This project would not have been possible without the generous contribution from Mountain Rose Herbs. We appreciate their dedication to protecting Oregon's wildlands, wildlife, and waters.