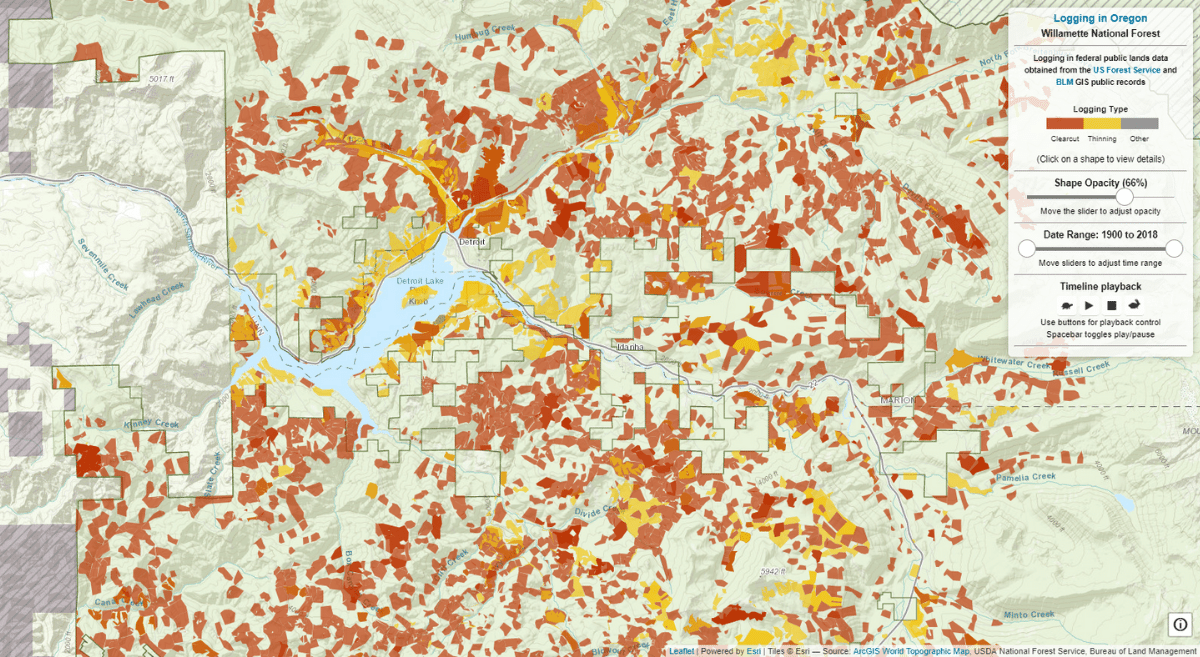 In a state covered in nearly 30 million acres of forested lands, it can be difficult to get a sense of the scale and extent of logging across Oregon.

Sure, you can pass miles of clearcuts and young plantations as you drive to the coast, but most forest lands aren’t accessible from major highways. A view from above, looking down from an airplane window for example, can give you a better sense, but this is still just a snapshot in time. This is one reason Oregon Wild volunteer Ricardo Morin spent hundreds of hours over the past year developing a “Logging in Oregon” web tool for analyzing the extent of logging on both public and private lands in Oregon, both historically and recently.  (Check out some of his other cool mapping work for Oregon Wild here.)

With the tool, you can explore more recent “forest loss” (aka logging) on private, state and tribal lands from 2001-2017. For example, in Tillamook County (especially near the community of Rockaway Beach), it’s easy to see the huge impact of clearcuts on coastal watersheds in recent years. This analysis is complimentary to other time-lapse videos showing the destruction of whole watersheds in real color.

For federal public land, detailed logging data is available by clicking on “Federal public lands” and then clicking on an agency sign logo on the map. You can then use the slider tool to adjust the date range – or do a time-lapse. Most logging begins in earnest in the 1950s and picks up speed and force through the 1980s. If you click on an individual forest stand, it will display the name of the project, the method of logging*, and the date it was logged. You can also note, for example, the shift from clearcut logging to thinning on public lands in many places.

*While some National Forests have data available for “thinning” vs clearcuts, not all do.

When “zoomed in” to the data from one National Forest or BLM District, you can’t see the other areas, so zoom back out by clicking “Logging in Oregon” (in the upper right corner) to see the big picture again before exploring another area.

Oregon Wild intends to use this mapping tool to help advocate for forest conservation and demonstrate that while there have been temporal pulses of increased logging intensity over the years, logging is always very active on both public and private forests in Oregon. In fact, if anything, the analysis on this site underrepresents the true extent of logging taking place.

The tool is also a great visualization of the few Wilderness and roadless wild lands remaining in the state - while it does not highlight these areas, they are clearly visible by their noticeable lack of logging units. These last bastions of wild landscapes are far too rare in Oregon, a reason Oregon Wild is working to protect what is left.

We can also use the tool to push back on misinformation spouted by timber interests.

A few notable examples to explore:

Data caveats: This mapping analysis is the compilation of the best available data sources for current and historic logging in Oregon. Some National Forests have better records for where logging has occurred than others, so there are some gaps where not all of the logging is displayed. Note that in some places you can see all logging vs clear cuts vs thinning. Older logging activities are less accurate and available compared to more recent years. Mapping thousands of stands that have been logged over the years not surprisingly has a margin of error. We estimate a +/- 5% margin of error for areas we’ve mapped and identified.