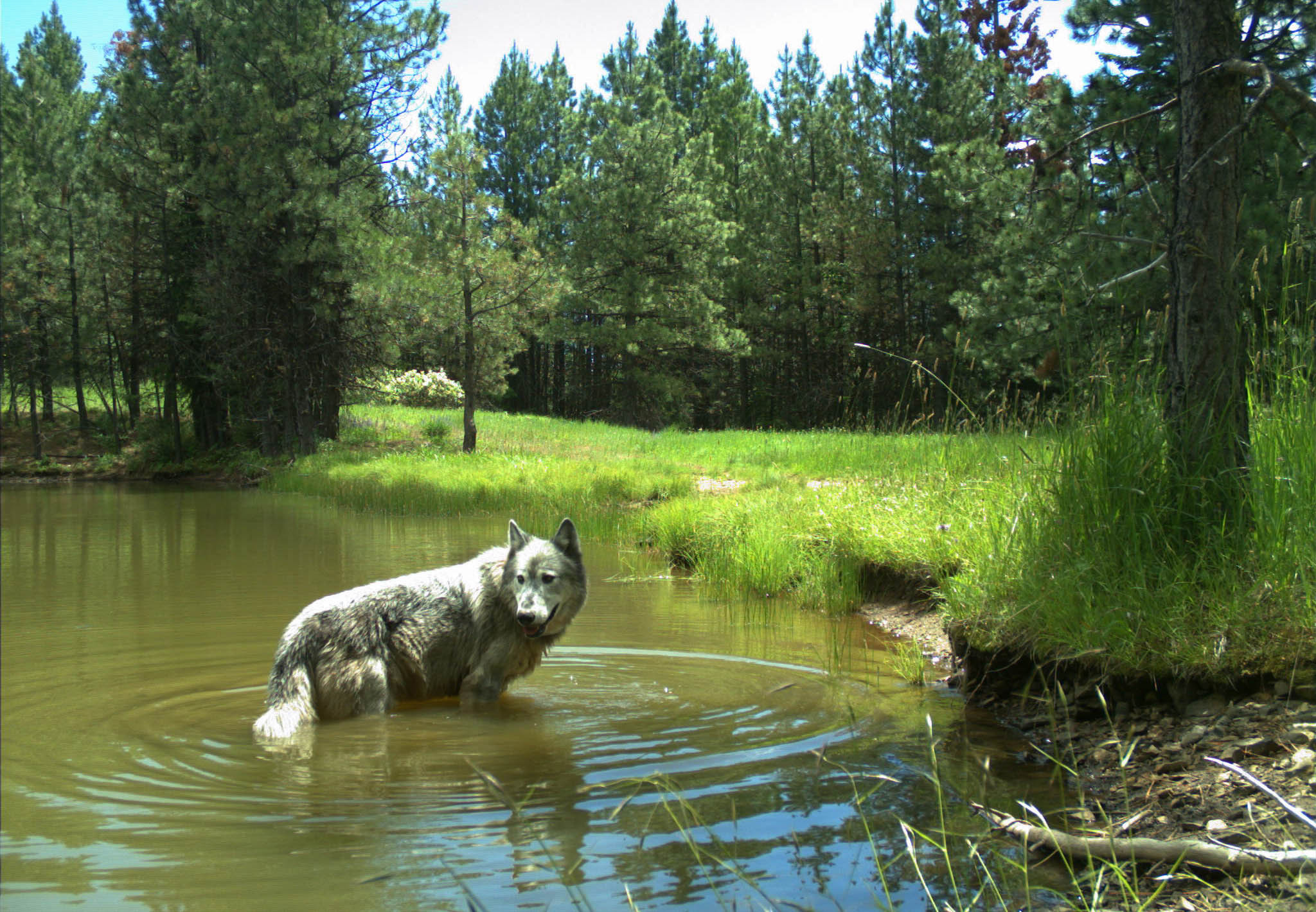 As far as wolves go, people tend to have strong opinions. Some cultures have revered wolves as the epitome of the wild; others have demonized them as big, bad monsters that blow down abodes of small swine and trick little girls clad in red hoods out of their picnic baskets.

Despite their rather wicked reputation, wolves have much to recommend them. These wild ancestors of our pet dogs are highly intelligent animals known for their playfulness and extreme loyalty.  Wolves mate for life and live in packs that also include their offspring. Within their family unit, the pack members work together to raise new pups and hunt for food. Wolves are social creatures; they play together, howl together, hunt together, and even take care of their injured pack members by licking their wounds.

Around the age of two years, some wolves disperse from their pack to form a new one.  While they may wander just outside of their family range, some will migrate great distances, as did Oregon’s very own OR-7, the wolf who was better known as “Journey.” The world watched Journey’s movement, courtesy of a tracking device, as he left his Imnaha pack in eastern Oregon and traveled over 1,000 miles to California and back to Oregon. Along the way, he was joined by a similarly adventurous female wolf and together they formed the Rogue Pack – the very first wolves in western Oregon in more than 65 years.

Wolves are also important to the ecosystem.

In addition to possessing these positive traits, wolves are key to a healthy environment. Scientists had a rare opportunity to witness just how critical wolves are to the ecosystem in 1995, when after decades of absence, wolves were reintroduced to Yellowstone National Park. Without wolves, the elk in the park were not motivated to move around when feeding.  Instead, they grazed in place on the vegetation to the point of destroying it. Other species that rely on those trees and plants began disappearing too. When wolves were added back into the equation, the elk returned to browsing on the move, which has allowed the trees and plants to recover.

Other species that also rely on the vegetation began rebounding too. For example, the new trees provided habitat for songbirds and food for beavers. Over time, the beaver population rose from a single colony to nine colonies as of the last count this past summer. The increased beaver population creates more beaver dams, which in turn improves the stability of the local watershed. The dams also provide cold, shaded water for fish. It’s remarkable that one species can make that big of a difference and is yet another reason to appreciate wolves.

Wolves and beavers can contribute to our state’s ecosystem just like they did in Yellowstone. The same dynamic described above can increase local wetlands, which in turn accelerates carbon extraction and storage, In this way, wolves (and beavers) can help us mitigate climate change if we allow them the opportunity.

In Oregon, wolves are only just beginning to make their comeback.

In 1947, Oregonians killed what had been the last wolf standing in the state. As wolves dispersed from Yellowstone, they made their way west. The first wolves re-entered the state in 1999 by swimming across the Snake River from Idaho and the first official packs were documented in 2009. Ten years later, the latest official survey by the Oregon Department of Fish and Wildlife in 2019 found 22 packs and a minimum of 158 wolves living in the state.

They say a picture is worth a thousand words. In the map below, you can see for yourself how wolves have started migrating into Oregon via the Oregon Wolf Trail. Simply uncheck all the years except 2009. Then bring back successive years to see how they have slowly moved into the state. You can also click on the paw prints to find out more information about each pack. The years are color-coded for easy recognition on the final map that shows the location of each pack. You can see that most of the packs are clustered in the northeastern part of the state.

Wolves have not yet returned to the remainder of their historic range in our state. Their recovery will take years and they have benefitted from being federally listed as an endangered species. Being included on the list means that no one can harm or kill wolves except in the special case when the government grants a permit, and as a result, their population can increase faster.

Unfortunately, time may be running out for this success story.

On October 29, 2020, the U.S. Department of Interior announced its intent to delist wolves from the Endangered Species Act effective January 4, 2021. Their theory is that wolves have recovered in some parts of the U.S. and that therefore as a group, they no longer need protection.

This is an unusual and contested move given that many required scientific reviewers disagreed with this conclusion.  Conservation groups have submitted the required notice of intent to sue to the U.S. Department of Interior to prevent the delisting. Keeping wolves on the endangered species list is critical to their existence, especially in places like Oregon where they are only just starting to recover.

The Oregon wolves need our help to fight this injustice!  We need to huff, and we need to puff, until we get these wolves home. If you want to help, here are a few actions you can take:
You can contribute to Oregon Wild’s fund to help with the impending lawsuit to stop the delisting. In the absence of federal protections, the state has jurisdiction over what happens to the wolves.  You can tell the Oregon Department of Fish and Wildlife that you think they should only use non-lethal methods to resolve wolf-livestock conflicts.

Let’s howl for our wolves until they get the protections they deserve!