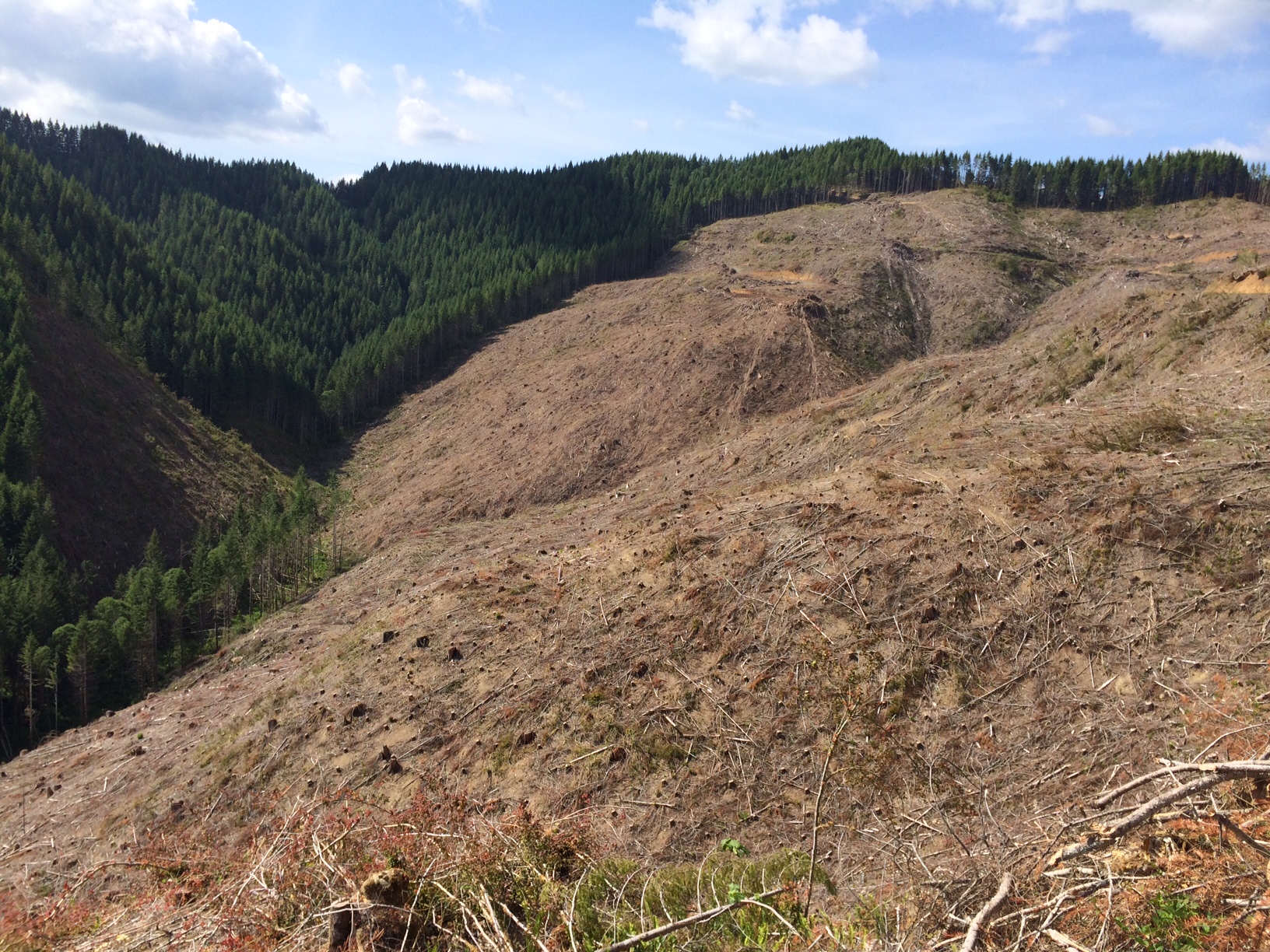 Last week, two dozen conservation groups and timber companies announced an agreement to chart a new course toward meaningful reform to Oregon’s outdated logging laws. Oregon Wild played a key role in negotiating the Memorandum of Understanding, which not only calls for immediate reforms to the Oregon Forest Practices Act (OFPA), but also begins an 18 month process that we expect to result in greater protections for waters, wildlife, and forests.

Oregon has weaker logging laws than its neighboring states, which is why Oregon Wild, partner organizations, and concerned citizens proposed several ballot initiatives to protect “Forest Waters” that our communities depend on.

As the Forest Waters movement continued to grow throughout the state, it became clear that the timber industry was feeling the pressure - filing their own counter measures against aerial spray reform, and ultimately prompting negotiations that will kick off a process for bringing Oregon’s logging rules into the 21st Century. The Memorandum of Understanding (MOU) laid out in the agreement signed on February 10 includes a framework for developing a Habitat Conservation Plan, which could bring Oregon’s logging laws in closer alignment with states like Washington and California. In fact, it was an HCP agreement that saw Washington’s logging rules vault ahead of Oregon’s 20 years ago.  You can read Oregon Wild’s statement here.

In the short term, the MOU calls for the Oregon Legislature to pass a bill during the short session (happening currently and scheduled to end March 9) to comprehensively reform Oregon’s weak aerial pesticide spraying laws. The bill (HB 4168) was first introduced February 20 and is moving quickly in Salem per legislative rules, but it still faces a few hurdles before passing. 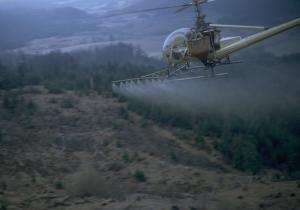 The proposed bill would implement a variety of improvements to Oregon’s current aerial spray laws, most of which have been part of legislative and ballot campaigns for the past ten years. Here are the three most important reforms in the bill:

1. Modernize Oregon’s notification system so that communities near aerial spraying activities are notified about spray applications in real time.

Oregon’s notification system for logging and pesticide spraying, FERNS, provides only limited information about the timing of logging and spray activities to the public. Currently, there is no requirement for logging companies to give real time notification to landowners who live near clearcuts that are sprayed, they simply are notified that spray could happen sometime in the next year. But that would change if the new legislation moves forward: nearby residents would get more timely notification, including within 24 hours of spray applications. The bill would also require logging companies to comply with other regulations that help protect people from exposure to pesticides.

Did you know that, currently, it’s perfectly legal to clearcut and spray herbicides within 60 feet of homes and schools? This bill would expand the spray buffers around these areas to 300 feet. This is a significant improvement and surpasses Washington’s buffer of 200 feet.  Evidence has shown that aerial spray can drift well beyond the intended target, putting community and wildlife health at risk. These new buffers will take a big step in the right direction - and paired with the new notification system will give communities more tools to protect themselves from harm.

3. Expand minimum buffers where aerial spray is prohibited along streams and near drinking water sources.

Oregon’s logging laws currently do very little to protect watersheds from aerial drift or pesticide runoff, which is especially concerning for the hundreds of thousands of Oregonians whose watershed is actively logged and sprayed. This bill would increase the size of no-spray buffers around springs and water intakes where people get their drinking water from 60 feet to 300 feet. In addition, it would extend spray protections to certain waterways that are currently not protected from spray, including the headwater systems that make up 70% of the state’s stream network. Under current practices, this extensive network of waterways receives no protections from aerial pesticide spray.

In addition to the aerial spray reforms outlined above, the legislation would also put into effect no-logging rules to retain stream-side trees to better protect salmon, trout, and bull trout habitat in southwest Oregon that passed for the rest of western Oregon in 2017.

How did we get to this point?

In 2015, a strong coalition of Oregon legislators, working on behalf of rural residents and public environmental health interests, pursued legislation to increase public transparency and accountability around uses of aerial pesticide and herbicide spraying. It would have created a notification system for aerial spray and set up a process for making rules about spraying close to homes, schools, and drinking water. Unfortunately, SB 613 was shunted to a closed-door working group where it languished, while another committee produced a watered-down bill backed by the timber industry.

After the legislature failed to act to limit aerial spraying  in 2015, Oregon Wild and our partners decided to file three initiative proposals for potential inclusion on the 2016 ballot. All three initiatives would have stopped aerial pesticide sprays in watersheds that are a source of drinking water, and near homes and schools. We were, unfortunately, unable to move the initiative forward in time to qualify for the ballot.

In 2017, Oregon Wild and many of our partners worked with legislators and community groups to introduce several ideas to the legislature that could dramatically improve forest and drinking water protections, and help people protect themselves from aerial spray. Again, the legislature failed to move even the most common-sense reforms out of committee. 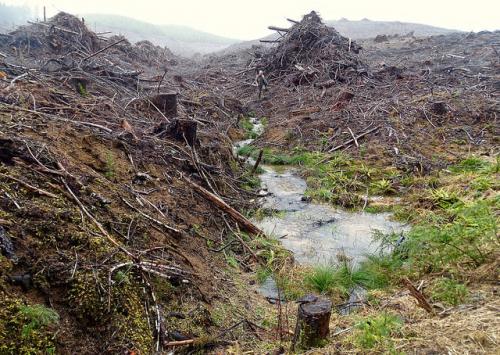 In 2018 and 2019, we continued building support for logging and spray reform, and worked with  partners and campaign experts  to craft a new round of ballot measures - beginning the qualification process in the fall of 2019. These initiatives would require no-spray buffers of 500 feet from water bodies, no-cut buffers varying from 50-100 feet on streams, and new rules for steep slope logging. The saga of Initiative Petitions 35, 36, and 37 unfolded in a battle with Oregon’s Secretary of State, the subsequent filing of Initiative Petitions 45, 46, and 47, and taking the steps necessary to mount a major signature gathering campaign this year to qualify for the November 2020 ballot.

The possibility of finding some agreement for reform of forest practices with the timber industry happened quickly, and, as noted above, would not have been possible without the years of pressure by activists speaking up, organizing, gaining media attention, and exposing again and again the shortcomings of Oregon’s outdated forestry laws. Ultimately, the timber industry agreed that change is needed, and we are now on a course to finally get the changes activists have demanded for years.

If the spray reform bill passes in the coming weeks, the signatory parties have agreed to withdraw support for the Forest Waters ballot initiatives and the initiatives proposed by the timber industry. Even if that happens, there will still be a major need for citizens and activists to help move reforms forward.

In the coming months, representatives from the timber and environmental groups that signed the MOU will be working with state and federal agencies to develop a process for what logging practice reforms will be addressed in Habitat Conservation Plan (HCP). The development of these changes will be informed by the best available science and will need to better protect fish and water quality by addressing the impacts of logging roads, logging on steep slopes, and logging near streams.  These reforms have the potential to be significantly more comprehensive than what could have come out of the initiative process.

As the HCP process plays out over the next few years, we will need our supporters to continue to speak up in favor of our forests, water, and wildlife during public comment opportunities, hearings, and other opportunities for citizen feedback. We know we have a long way to go to update Oregon’s weak forest laws so that we can address the impacts years of clearcutting has had on our climate, streams, fish, wildlife, and human health. The work is just beginning!