The Stop-Motion Journey of Oregon's Most Famous Wolf 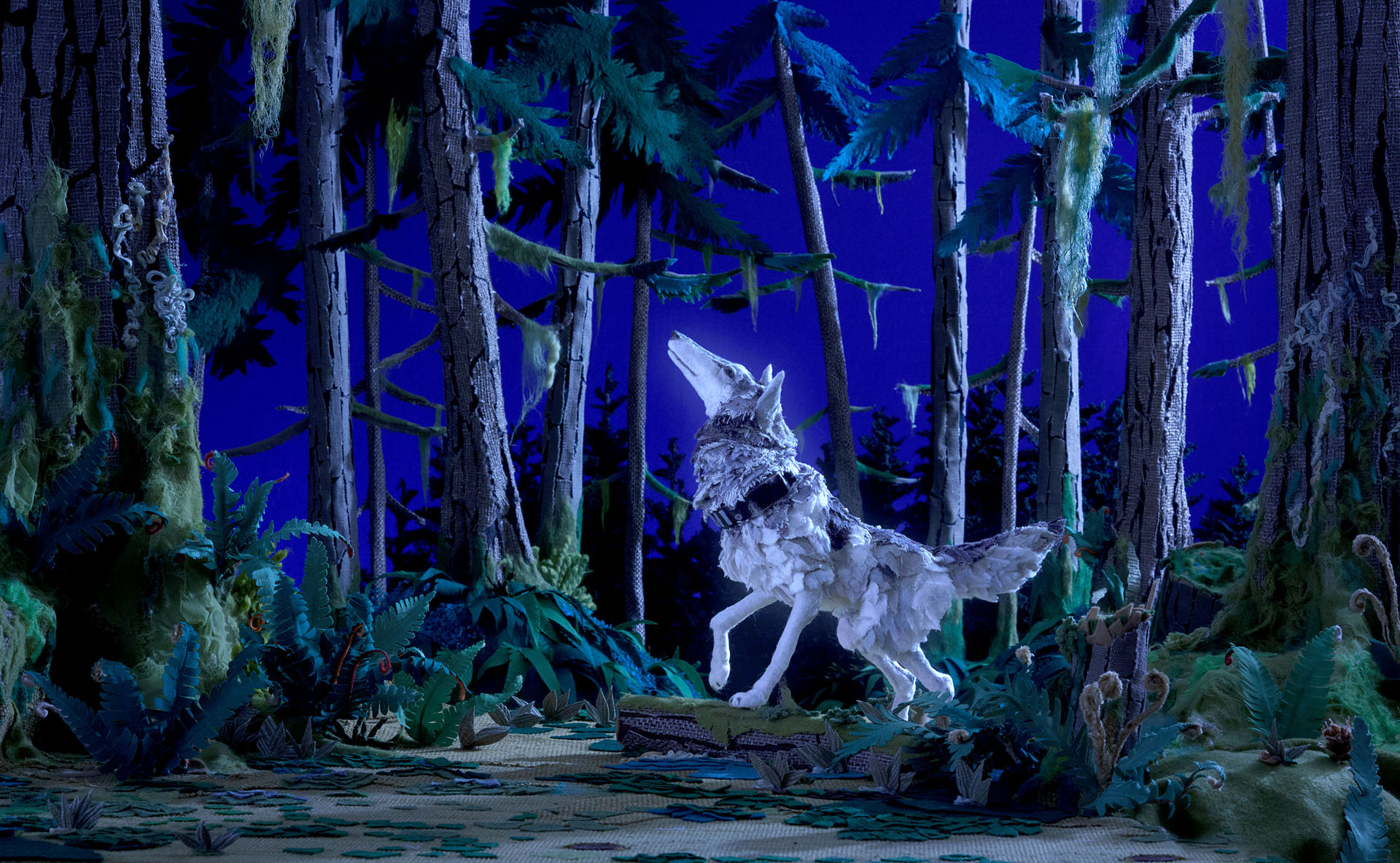 In the fall of 2011, a radio-collared Oregon wolf with the designation OR-7 from the Imnaha Pack in northeast Oregon made history. After an epic journey across the state, the two-year-old male became the first confirmed wolf west of the Cascades since the last wolf bounty had been collected in 1947.

That wolf would come to be known as Journey and he captured the world’s imagination. Now his story is coming to life like never before in a stop-motion animated film. Nowheres Wolf is halfway through production and a crowdfunding effort is being launched to help finish this historic tale.

We interviewed director and artist Suzanne Moulton on the inspiration of this film and what she hopes people will take away from it.

You’ve done work on a number of conservation and wildlife-related projects merging art and education. How did you become such a passionate advocate for wildlife?

My connection to wildlife and wild places is deep and has always inspired my art. I grew up in the forests of the Northeast as a child of the Back-to-the-Land movement of the 70s. My parents started a small one-family-sustaining farm while giving refuge to retired circus ponies and rescue goats. The childhood they gave me was intertwined in nature.

Growing up on the East Coast, all our forests are reconstructed and lack the biodiversity I was amazed to find here in the ancient growth forests of the Northwest.

I’m a big believer in ‘Think Globally, Act Locally’ so I’ve focused on inspiring people to take small actions at home that can make a big difference in whether a local species dies or thrives. Sometimes all that's required is a change in a misconception! 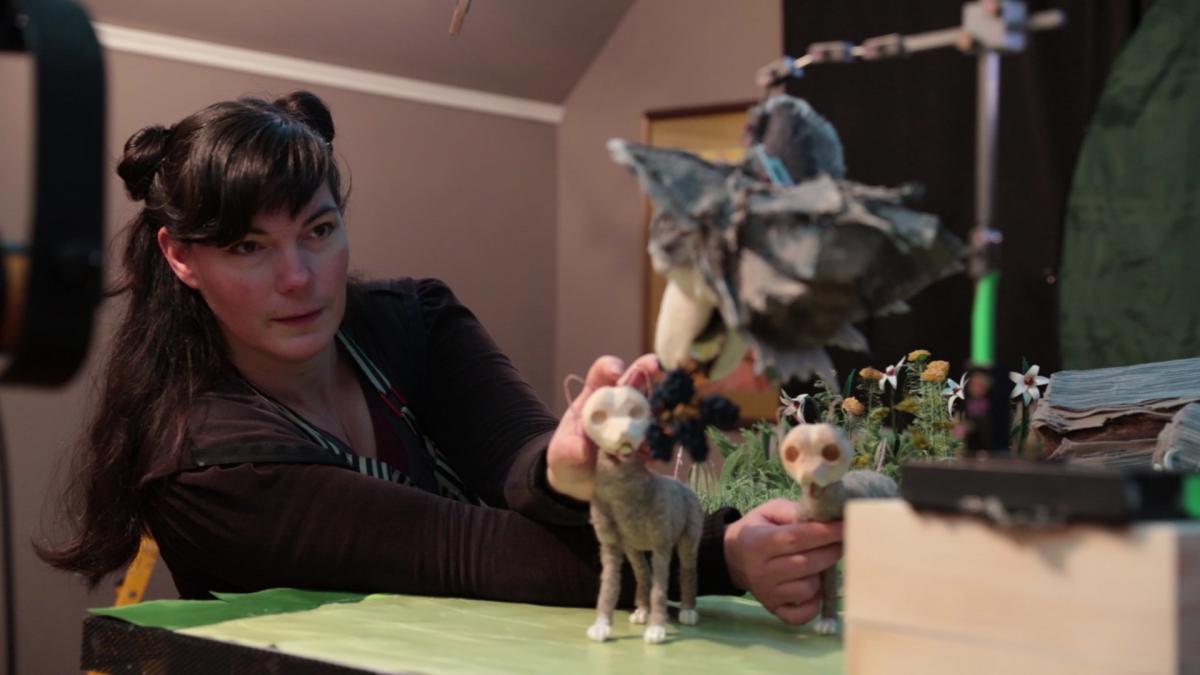 From my experience in the stop-motion film industry, and as an artist and custom toy maker, I realized these communities are powerful allies. In these turbulent times, we need inspiration and fun projects to cut through all the heaviness and apathy. So I design and teach craft workshops where participants make art about a specific local imperiled species while learning fun facts about that animal. If you spend any time drawing or sculpting a particular animal, you will forever remember and care about that creature, whether it be a pileated woodpecker, marbled murrelet or the distinctive marking of the Walla Walla Wolf pack.

Talking with friends and colleagues, we saw an opportunity to make an even more ambitious project to reach larger audiences: an independent short film we now call Nowheres Wolf. We chose to create awareness for the wolf because this creature is threatened the most by human apathy and hate. As artists, we can use our talents to address these issues and help change perceptions.

Nowheres Wolf is my third collaborative campaign for wildlife. The first Oregon campaign I created was called “Birds of the Elliott” and included museum exhibitions of textile sculptures and a stop-motion DIY needle-felting video on how to make a Marbled Murrelet, and multiple craft workshops that I still offer and continue to be popular. And I'm so proud to have contributed to the “Thriving with Fire” mini film series! With a core team consisting of world-class stop-motion animator Suzanne Twining, VFX artist and cinematographer Jorge Martinez, and myself as puppet and set-builder, we developed, built and animated the Dotty the Owl spokesowl character for this incredibly uplifting and illuminating miniseries created by Balance Media and Ralph Bloemers, now available to watch on ThrivingWithFire.org. With all the human tragedy from wildfires, this series shines a bit of hope on the subject of forest fire.

What inspired you to tell Journey’s story?

I became aware of wolf OR-7 when he first entered California. I remember the excitement he brought to so many communities when he defied what we thought we knew about wolves. The process of giving Journey his name captured people’s hearts! Through his travels and sightings, he challenged so many people’s deeply held negative beliefs about wolves.

As I poured over photos of Oregon’s wolves, I noticed that only two wolves in Oregon have names, Journey being the most famous. I wondered, what would it be like if we put names to more wolf faces? I decided that people needed to see these creatures as individuals, not just hear about them as numbers on an ODFW tally.

Looking at the documentaries about his life, one can sum it up as longing to belong - something we can all relate to! I feel this story grows compassion for the misunderstood wolf in this era when we need to relearn how to coexist.

You say this film is about changing the way we think about wolves. What ideas are you challenging and how is it important for wolf conservation?

In researching for this film project, I found a lot of posts from mothers fearing for their children as a response to the reintroduction of wolves. Could I relate to this? And deep down, how did I feel about living with wolves in my backyard? Or how about hearing wolf howls while I’m hiking through a forest? Did I feel fear or excitement? Did I have good reason to be afraid? I’ve done a good deal of back-country backpacking in bear and cougar country, and there are protocols you follow and animal behaviors you learn, so you can have as safe an experience as possible. But what is taught about wolves?

As I read books like Journey: the Wolf that Made History by Beckie Elgin, watched documentaries, talked with experts, and reflected on my own experiences with wild canids, I discovered that the plight of the wolf is not just a story of an endangered species, but a story of extreme prejudice based on myths from the Dark Ages. Much of the fear of wolves is based on rabid animals, not healthy normal wolf behavior. Then I realized that pop culture has perpetuated the villainization of the wolf and shaped a nearly completely negative world view of the wolf. My hope is that this film might spark a positive narrative for the wolf in pop culture as being loyal, loving and dedicated to family. 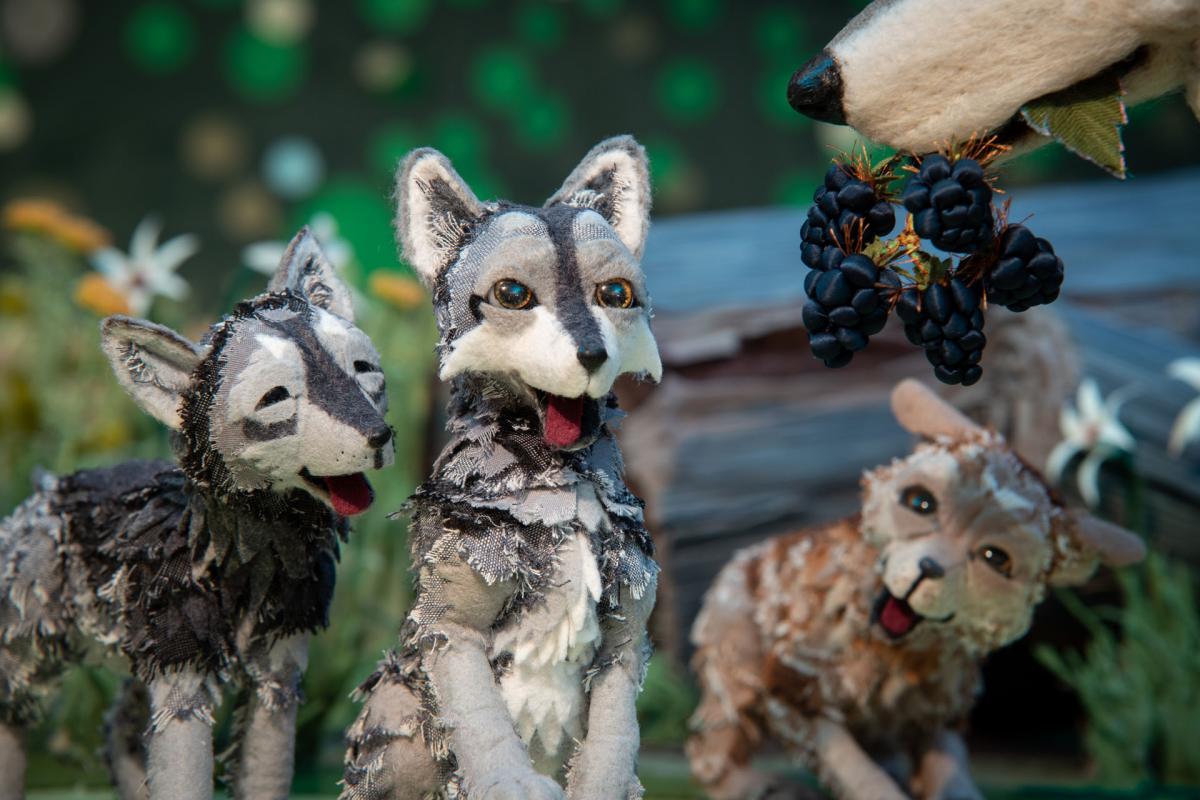 Wolf pup OR-7 and siblings about to eat blackberries. Photo by Leila Chieko.

What do you hope people will take away from this film?

I hope that this film is a conversation starter and a point of inspiration for people to question their own negative views on wolves and decide to learn more. I hope people will begin to see beyond the toothy icon and see wolves as vulnerable, loving and sentient creatures which need our compassion.

What are the next steps for the film's production? Where will we be able to see the film once it is completed?

Currently, we have nearly half the film animated. The next half of the film is the most technically difficult and gear heavy, and to accomplish those scenes we have launched a crowdfunding campaign on GoFundMe. During our campaign, we’ll be sharing behind-the-scenes footage in addition to sneak peeks of our film, all on Seed&spark. Streaming access to our completed film is one of the pledge rewards! We plan on touring film festivals for a duration then making the film available to schools and wildlife advocacy organizations to spread awareness for wolves. People???s contributions will make it possible for us to finish this film so that we can share the love with underserved communities and schools most in need of successful and safe coexistence with wolves.

In addition to the film, I’ve been presenting craft workshops featuring Oregon’s wolves around the region as part of the community outreach portion of the project. The next workshop is Needle-Felted Mini Wolves on July 13 at the Gresham Library. People interested should register early as spots go quickly at free workshops like this! Alternatively, folks can request this workshop at their local Multnomah County Library. And for the entire month of July we will have a display hosted by the Gresham Library as an extra treat if you want to see some of our puppets and scenery from the film in person! 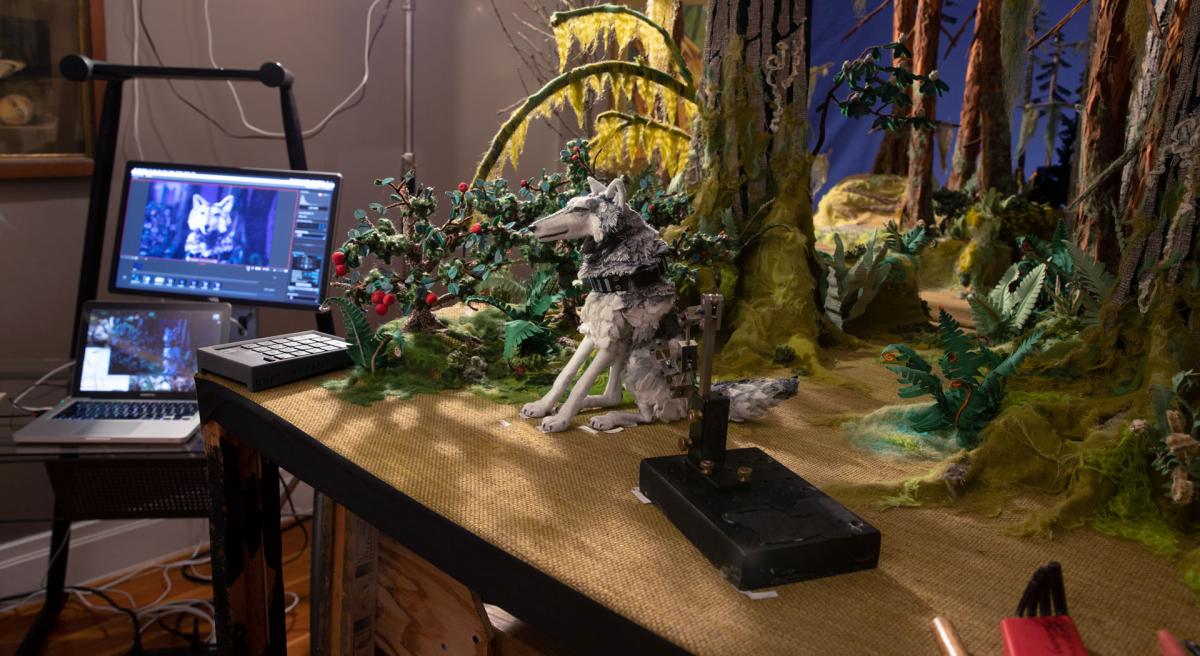 Stop-motion puppet OR-7 rigged for animation. Photo by Leila Chieko.

Do you have an idea what your next project might be?

If this film receives enough support and traction, we hope to gain some impact funders to grow this project into a film series. Our idea is to have each episode depict real wolf behavior and a portion of OR-7’s journey. What I’d really like is to combine the film series into a feature-length film about Journey’s life.

I also love live-action puppetry and have several projects in the wings. I’m a big advocate for our native pollinators, having worked since 2013 to educate people and businesses about the dangers of using neonics. I hope to create a project that shifts negative gut reactions to wasps and native bees by growing more understanding and encouraging more backyard habitats.

How can people find you? 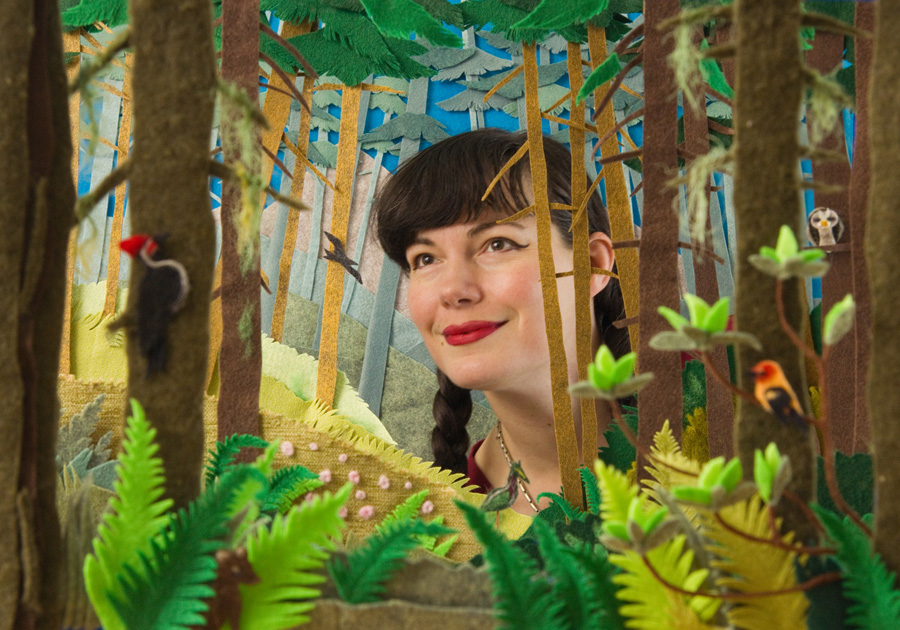