Mt. Hood National Forest, Oregon -- Environmental defense groups in Oregon prevailed in a suit challenging the U.S. Forest Service for violating federal protections for public resources in planning its largest Mt. Hood logging project in two decades. Thousands of hours of volunteer field surveys documented how the agency’s claims that this forest management project would reduce fire risk were unsupported by science and inconsistent with conditions on the ground. The volunteers measured the size and extent of fire-resistant old-growth and submitted scientific studies that directly disputed the Forest Service’s claims. 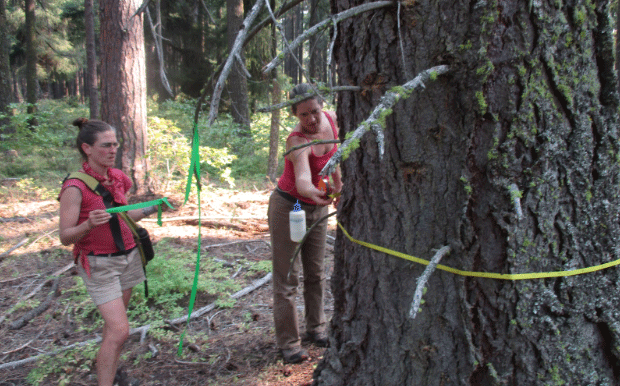 In early April, the Ninth Circuit court affirmed arguments by Bark, Cascadia Wildlands, and Oregon Wild that the Forest Service willfully ignored relevant science regarding the impact of logging mature and old-growth forests on fire behavior and failed to properly assess the cumulative impact of commercial logging in its Environmental Assessment of the “Crystal Clear Restoration project”. The court rebuked the agency for utilizing “vague” science in its environmental assessment and ruled that the agency’s decision to shortchange its environmental analysis was “arbitrary and capricious”. The agency will be ordered to produce an Environmental Impact Statement to thoroughly analyze the cumulative impact of the project and to incorporate all relevant fire science.

The lawsuit points out that after a lengthy assessment and public process the U.S. Forest Service disregarded the best available science and public input, opting instead to simply ‘get out the cut’. The Wasco Forest Collaborative group is active in the area but was not consulted in the planning of this project. Legal action by the plaintiffs came after the Forest Service failed to resolve the concerns brought by the groups and members of the public. Over the course of the project development Bark’s volunteer groundtruthers committed thousands of hours to field checking the project, identifying areas of mature, old-growth and native forest. Survey data gathered by these volunteers were submitted to the agency for inclusion in its environmental assessment, but the Forest Service largely dismissed the community science effort.

“It is critical that public agencies managing our forests abide by the National Environmental Policy Act, incorporate the best available science, and uphold the public process,” said Nick Cady, Legal Director of Cascadia Wildlands. “Disregarding science and valuable public input is not acceptable.”

The Environmental Assessment prepared by the U.S. Forest Service in 2017 claimed that conditions in the project area could generate “uncharacteristic wildfire” and that heavy logging is needed to reduce “fuels” in the area. The agency position that forest “thinning” is an effective fire control practice is contradicted by a large body of science, presented by the environmental groups in the lawsuit as evidence that the agency has proposed scientifically controversial activities. The court said:

Substantial expert opinion presented by the Appellants during the administrative process disputes the USFS’s conclusion that thinning is helpful for fire suppression and safety. . . This dispute is of substantial consequence because variable density thinning is planned in the entire Project area, and fire management is a crucial issue that has wide-ranging ecological impacts and affects human life.

“Logging to save habitat from fire is one of the Forest Service’s favorite assumptions,” said Doug Heiken of Oregon Wild, “But the science shows that attempting to control fire through logging is a highly unreliable practice and, in some areas, logging can create conditions that increase fire severity.”

The court also found that the Forest Service either ignored or provided “insufficient” analysis on cumulative impacts on subjects such as fuels management, transportation resources, and endangered species habitat. The environmental groups argued that the Forest Service purposefully avoided assessing environmental impacts that would limit the amount of timber cut, ignoring the very purpose of the National Environmental Policy Act, a point that the court emphasized, stating that the “fundamental purpose of NEPA’s requirement that agencies analyze cumulative impacts.” The decision continued: “Overall, there is nothing in the EA that could constitute “quantified or detailed information” about the cumulative effects of the Project.”

“In its very first public comment, Bark asked the Forest Service to prepare an EIS to assess the impacts of this project, providing field data and scientific research that showed it may significantly impact the environment. At every step of the way, the Forest Service chose to ignore this public input.” said Brenna Bell, staff attorney for Bark and lead counsel on the case.  “Four years later, the court affirmed what we’ve been saying all along.  It would have saved so much time and energy for the Forest Service to acknowledge this from the beginning.”

While the EIS is forthcoming, the environmental groups note that issues raised about the northern spotted owl habitat, the agency’s position on climate change and the project’s climate and carbon implications remain unaddressed. The 1990 Mt. Hood Forest Management Plan contains no direction to the agency on planning for or responding to climate change. In its Environmental Assessment for the Crystal Clear project, now invalidated by the court, the Forest Service stated:

“PNW forests contain some of the deepest carbon stores in the country and these vast forest ecosystems represent a significant percentage of the global ecosystem’s carbon sequestration capacity,” said Courtney Rae, Bark’s Associate Director. “As the manager of nearly all of our remaining intact forest ecosystems, the Forest Service needs to stop ignoring the interactions between industrial logging and climate change. Bark will continue to press the agency to properly account for the climate impact of its forest management decisions.”

Located entirely within critical habitat for the spotted owl, the 11,742 acre “Crystal Clear Restoration” (CCR) project on the eastern shoulder of Mt. Hood National Forest proposed 3,494 acres of logging within mature and old growth forests and the region now occupied by the White River Wolf pack. The project borders the Confederated Tribes of Warm Springs Reservation. The timber produced from this project would equal twice the annual volume from the entire forest.