More than 122,000 call for protecting mature, old-growth federal forests and trees from logging 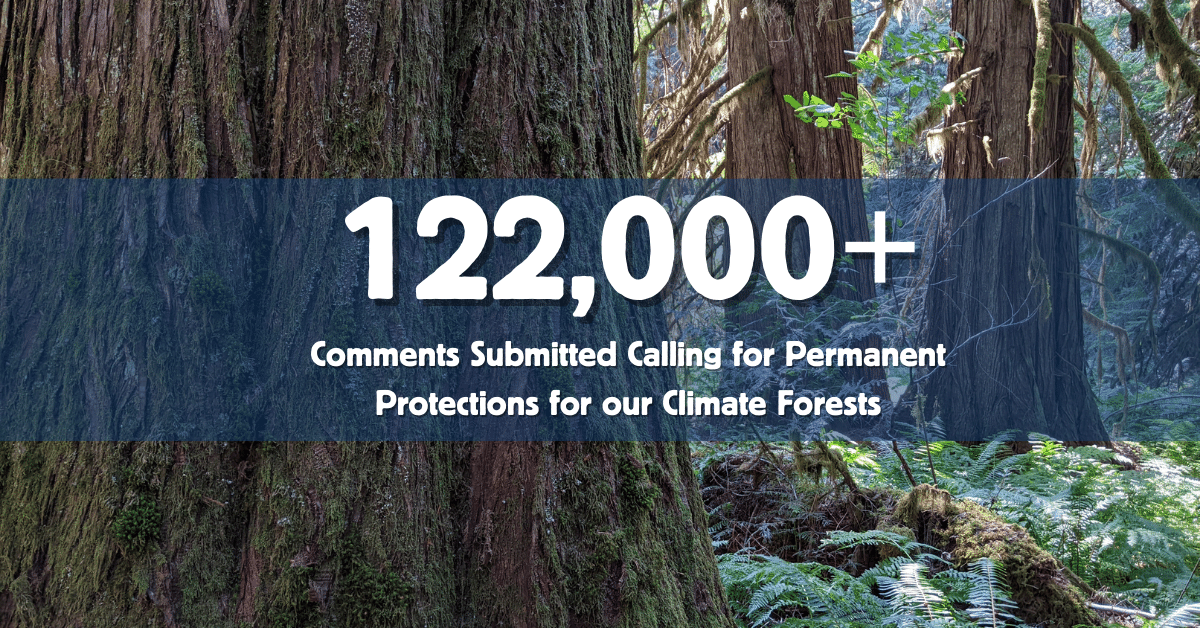 Washington, D.C. – Environmental groups delivered more than 122,000 public comments today urging the U.S. Department of Agriculture (USDA) and the U.S. Department of the Interior (DOI) to protect mature and old-growth forests and trees on federal public lands from logging as a cornerstone of U.S. climate policy.

The public comment period was in response to President Biden’s executive order that celebrated public forests as “some of the most biodiverse parts of our planet and play[ing] an irreplaceable role in reaching net-zero greenhouse gas emissions.” Today’s comment deadline was for defining mature and old-growth forests.

Environmental groups say that mature forests and trees should be defined as 80 years and older to protect against the ongoing logging that undermines Biden’s directive to retain and enhance carbon storage and conserve biodiversity. By 80 years of age, trees have accumulated decades of stored carbon and provide significant biodiversity benefits. The groups are calling for a federal rule that would designate stands and trees older than 80 years as off limits to logging with carefully tailored exceptions for non-commercial purposes, such as activities that support Tribal cultures or appropriate measures to protect structures from fire.

“There is no question that mature and old-growth trees are vital to the current health and livable future of our planet. In the face of the worsening climate crisis, a federal rule must be established to protect these trees for future generations,” said Blaine Miller-McFeeley, senior legislative representative at Earthjustice. “As thousands have clearly expressed during this comment period, creating a simple definition is a key first step, and the administration should now move forward swiftly to protect these giants from logging and all threats, before they are gone.”

While the public comment period was underway this summer, the Climate Forests coalition published a report detailing federal logging proposals targeting nearly a quarter of a million acres of mature and old-growth forests and trees across nine states, from California to Vermont. The report called on the Biden administration to enact a permanent administrative rule to protect these critically vital forests and trees, which would align with its pledge to protect federal forests as well as live up to its climate commitments.

“Logging is the greatest immediate threat to the beautiful old trees and forests on our public lands,” said Randi Spivak, director of the Center for Biological Diversity’s public lands program. “Tens of thousands of people have told the Biden administration that they want these carbon-storing giants protected. By letting mature and old-growth trees grow, we’ll be safeguarding carbon, clean water and air, and biodiversity. Our climate and future generations depend on it.”

Mature and old-growth forests store and sequester a vast amount of carbon, making them an essential resource for achieving our nation’s climate commitments. They also offer other crucial ecosystem values, including wildlife habitat for vulnerable species, watershed function to provide water for communities across the country, and unmatched outdoor recreation experiences for the public.

“Trees capture and store the pollution that causes climate change, and the older and larger they become, the more effective they are,” said Steve Pedery, conservation director with Oregon Wild. “Protecting mature and old-growth forests on America's public lands is one of the biggest single steps we can take to combat climate change, and President Biden should move quickly to adopt a national rule to protect these vital climate forests.”

As the harm from climate change intensifies, including extreme weather, drought and severe wildfires, groups are urging federal agencies to deploy effective strategies to mitigate and adapt to these impacts. Larger, older trees are generally more resistant to wildfires. Preserving mature and old-growth forests and trees is a meaningful, cost-effective measure the Biden administration can take immediately to help mitigate climate change. Federal forests sequester 35 million metric tons of carbon annually, a number that could rise steadily with new conservation measures to let these older trees continue to grow.

“Carbon storage moving into the future is essential, as we address our ever-changing climate and its rippling effects,” said Alex Craven, senior campaign representative at the Sierra Club. “One of the most effective tools for carbon removal -- mature and old growth forests -- are literally right in front of us, and all we need to do is protect them and keep them standing.”

“Mature and old-growth forests are North America's ‘lungs’ as they draw down and store massive amounts of atmospheric carbon vital to reducing severe climate impacts,” said Dr. Dominick A. DellaSala, chief scientist at Wild Heritage. “Over 50 million acres of federal mature forests are vulnerable to logging, which if logged, would release the equivalent of 18% of all emissions within a decade.”

“Today’s mature forests are our children and grandchildren’s old-growth,” commented Zack Porter, director of the New England-based public land advocacy organization, Standing Trees. “Healthy forests are complex ecosystems, but protecting them for the benefit of future generations is remarkably simple: it’s past time to end logging of forests over age 80 on federal lands.”

“Our forests do it all. They filter our air and water, provide habitat for hundreds of species and help us fight climate change. Our older forests are the real champs, performing all of these functions better than their younger counterparts,” said Ellen Montgomery, public lands campaign director with Environment America. “If we leave our 80-year-old trees and forests standing, they’ll become more valuable every decade.”

In addition to the public comments from grassroots supporters, more than 100 climate and conservation organizations submitted a letter calling for a strong, durable administrative rule to safeguard mature and old-growth forests from logging.

“Undoubtedly, the Biden administration should move quickly to protect mature and old-growth forests, not only to ensure their role as a natural climate-crisis solution, but also to protect crucial habitat for plants and animals,” said Adam Rissien, rewilding manager with WildEarth Guardians. “Sadly, the Forest Service and Bureau of Land Management fail to recognize logging as a threat, and are moving quickly to chop down these forests under the guise of reducing wildfires.”