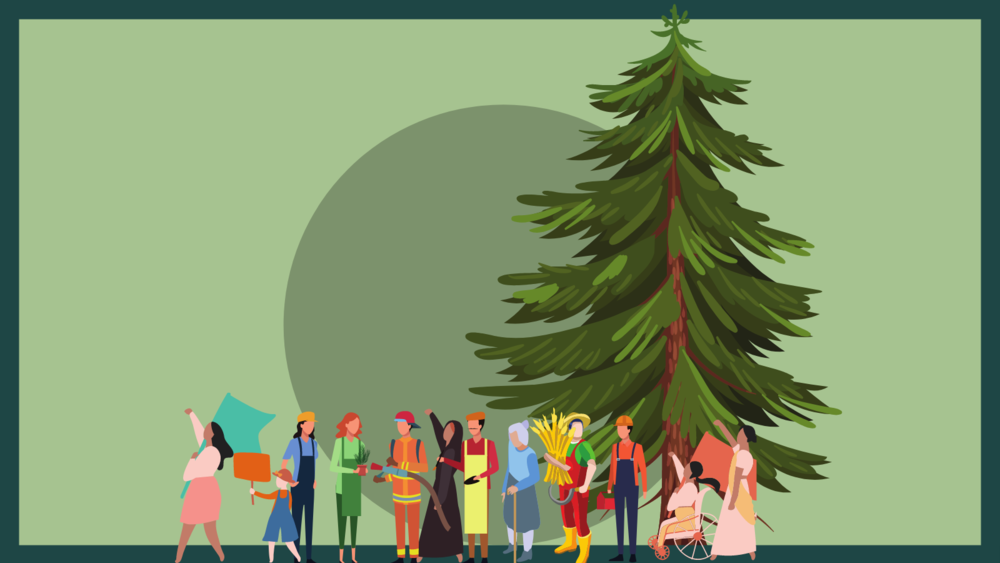 Today, dozens of forest and climate justice organizations across northern California, Oregon, and Washington released a sweeping Green New Deal for Pacific Northwest Forests platform calling for the transformation of current forest practices on private, state, and federal land in the face of the climate crisis and ecological collapse. The platform emphasizes the critical role that the forests of the Pacific Northwest must play in efforts to mitigate climate change and to safeguard communities from climate impacts such as wildfire and drought. The six pillars of the Green New Deal for Pacific Northwest Forests address the intersecting issues of industrial logging, climate change, species collapse, economic injustice and the disempowerment of frontline communities.

Matt Stevenson, a high-schooler, and the leader of the Forest Team of Sunrise Movement PDX, a youth organization focused on climate justice, said:

As a high schooler, I have grown up without much hope for my future, and with the knowledge that my generation may inherit a broken and desolate earth. Industrial forestry practices and the timber industry is one of the largest causes of this hopelessness, one of the leading destructive forces of the Pacific Northwest, and the single largest carbon emitter in Oregon. If I, or my generation, wants any hope of a liveable future we must fundamentally transform the way we treat our forests.

Cities and states play a vital role in beginning the decade of the Green New Deal at the local level and providing new models for effective climate action. The Green New Deal Plan for Pacific Northwest Forests is an exciting, visionary governing project that will do just that. Young people all over this country are calling for change to protect the people and places we love. Sunrise Movement wholeheartedly supports this platform because we have everything to lose if we don’t act now.

The six pillars of the PNW Green New Deal lay out a path that provides job opportunities for disadvantaged workers to be true heroes in the eyes of rural communities as they conduct fuel reduction close to homes and infrastructure where it matters most, in the home ignition zone. In turn forests can be allowed to fulfill the full range of ecosystem services, sequestration of carbon and clean water most importantly, all the while allowing for rewilding of the most remote areas, complete with intact ecosystem processes like naturally-occurring fires.

The Green New Deal for Pacific Northwest Forests calls not only for a transformation of industrial logging to protect forests, waterways and communities, but also for a jobs guarantee and increased government investments in climate resilience for frontline communities. In line with the intersectional movement for climate justice, the platform outlines a clear path forward for governments at all levels to utilize the invaluable forests of the Pacific Northwest as a tool to address the many crises facing the region and the country.

The Green New Deal for Pacific Northwest Forests is a rallying cry from the forest defense and climate justice movements.  From city-dwelling environmentalists to rural loggers, we all want just jobs, climate-safe communities, and healthy forested watersheds. Industrial logging undercuts these shared values by degrading the landbase, poisoning our watersheds, outsourcing local jobs and fueling climate chaos. The Green New Deal platform gives voice to the kinds of changes needed to actualize a possible future where forest defense and a just transition are part of our climate solution.

The Pacific Northwest's vast forests helped build America and the Northwest's working class. Climate change is transforming the world and the working class will suffer the most from its effects. A Green New Deal for Pacific Northwest Forests takes us on a path forward for a sustainable environment and economy that will store carbon, provide the rural Northwest jobs and infrastructure, and invest in the region's most marginalized communities. Not only can we afford this plan, but the price of not embarking on it is too horrific to contemplate.

Older forests in the Pacific Northwest forests store more carbon per acre than tropical rainforests — both need to be protected as proven nature-based climate solutions. The PNW Green New Deal makes it clear that to avoid climate catastrophe, we must not only leave dinosaur-carbon in the ground, but advocate for policy change to more effectively store atmospheric carbon in our region's forests.

The landscape-oriented Pacifc Northwest platform dovetails with the national Green New Deal as championed by U.S. Representative Alexandria Ocasio Cortez (D-N.Y.) and Senator Ed Markey (D-MA), along with congressional members from the Oregon, Washington and California delegations such as Senator Jeff Merkley and Representative Pramila Jayapal.The Green New Deal for Pacific Northwest Forests offers a vision for a just transition away from destructive forest practices and struggling economies toward a vibrant workforce dedicated to restoration, recreation, education and climate-smart practices for forests and forest dependent communities.

Hundreds of climate scientists and ecologists are telling policymakers that logging is a major source of carbon emissions, and we must do more to protect our forests so they can draw down atmospheric carbon. This goes hand in hand with a just transition, because we know that real prosperity in rural communities is tied mainly to forest protection, not degradation and exploitation.

To address the unprecedented threat that climate change poses to our society, we must recognize that forest defense is community defense, and that by protecting our forested ecosystems, we also safeguard the diverse communities that rely on them. The Green New Deal for Pacific Northwest forests provides a roadmap for the Biden administration to advance justice and address climate change by protecting and restoring our treasured forests.

Read the executive summary and the full platform for a Green New Deal for Pacific Northwest Forests here.

Read reporting about the role that Pacific Northwest forests can play in mitigating and adapting to climate change. Read reporting about strategies to lessen the threat of wildfire to communities across the west. Read the U.S. House and Senate resolutions on the Green New Deal.

Logging is the number one source of emissions in the state of Oregon, and emits far more carbon than transportation or residential and commercial sectors (Law et al. 2018). While similar research has not been completed in Washington and California, we can assume that logging in these states have similar climate impacts. Studies have also shown that, if left unlogged, forests of the Pacific Northwest could sequester massive amounts of carbon from the atmosphere and significantly contribute to global efforts to mitigate the climate crisis (Buotte et al. 2019). Groups across the region are rallying around a Green New Deal for Pacific Northwest Forests in order to protect these invaluable carbon stores.

The climate crisis, which is being driven in part by industrial logging, increases risk and severity of wildfire (Abatzoglou and Williams 2016). Industrial logging also directly increases wildfire impacts due to the resulting monoculture tree plantations, which allow fire to burn more severely and spread more quickly (Zald et al. 2018). On the other hand, forests with a greater degree of protection have lower wildfire risk (Bradley et al. 2016). Implementing measures such as home-hardening, the creation of defensible space and zoning limits allows communities to adapt to the effects of increasing wildfire on the landscape (Syphard 2019). Investments in home-hardening and community resilience are pieces of the Green New Deal for Pacific Northwest Forests