A public records request for emails and text messages between the staff of Governor Kate Brown and backers of controversial wolf legislation during the 2016 session appear to contradict claims of her office’s neutrality on the bill.  The messages show that her staff  were heavily involved in the development of the legislation, and worked closely with lobbyists for the livestock industry to push the measure through the Oregon Senate.

“These emails and texts raise very troubling questions about the Governor’s staff, and their involvement in a bill to weaken protections for wolves and to restrict the rights of Oregonians to challenge government decisions,” said Steve Pedery, Conservation Director for Oregon Wild. “Governor Brown stated her office was ‘neutral’ on the bill, but these records clearly show her staff helped organize its passage, and even drafted and circulated arguments supporting it.”

HB 4040 blocked Oregonians from seeking judicial review of the Oregon Department of Fish and Wildlife’s (ODFW) decision to remove gray wolves from the Oregon Endangered Species Act. There are currently 106 known wolves in Oregon, a third of which are about one year old or younger.

In a March 3rd news conference, Gov. Brown denied her office’s involvement in HB 4040 “other than at the request of legislators.” The emails obtained under Oregon public records law show Brown’s staff actively coordinating with the bill’s legislative proponents and lobbyists for the Oregon Cattlemen’s Association and Oregon Farm Bureau beginning several months before the 2016 legislative session began.

The documents show Governor Brown’s staff in close communication with the lobbyists and legislators who developed HB 4040, and later that Governor’s staff provided key legislators with arguments for the bill.  In one lengthy email to Senate Environment Chairman Chris Edwards, the Governor’s staff provided detailed talking points that were later used almost verbatim by Sen. Edwards when he shepherded the controversial legislation through his committee, then on to the full Senate.  The email contains a number of highly misleading claims, and appeared designed to undercut the credibility of Oregon conservation organizations with Sen. Edwards and other legislators. 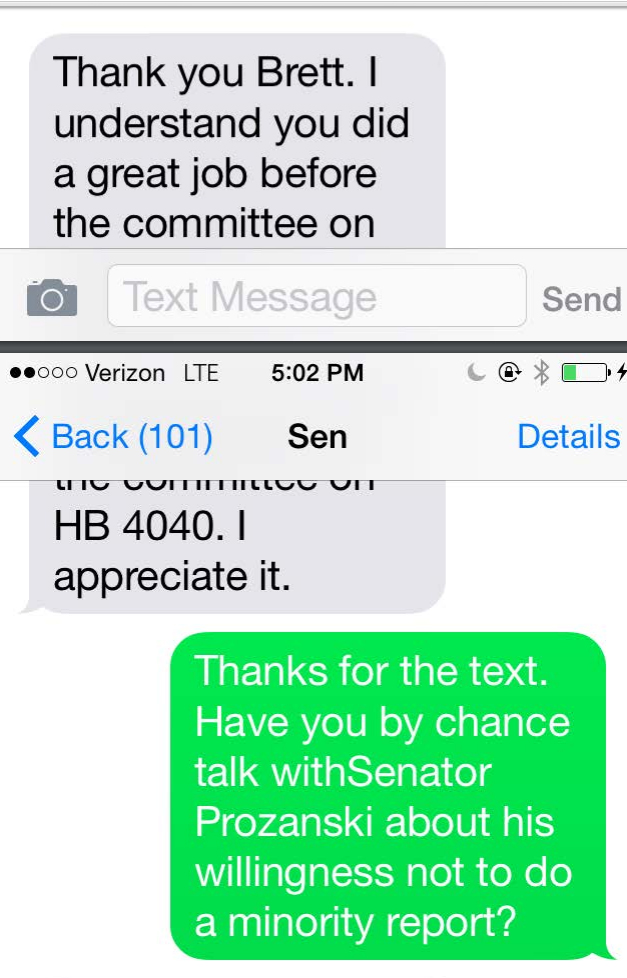 “Oregon’s environmental community embraced Kate Brown when she took office as Governor, and praised her environmental record as a legislator,” observed Pedery.  “But over the last year and a half there has been a huge disconnect between her record and the actions of her administration on wolves, forests, and clean water.”

Following HB 4040’s passage of the Oregon Senate, text message records between Brownscombe and Senator Bill Hansell, HB 4040’s Oregon Senate sponsor, indicate that the Governor’s office was opposed to a minority report critical of the bill that was authored by Senators Michael Dembrow and Floyd Prozanski. That minority report was never formally filed.

“We hope the disclosure of these texts and emails will lead Governor Brown to take a closer look at the actions of her administration,” Pedery concluded.  “Polls show that Oregonians overwhelmingly support wildlife conservation, and want to see wolves protected, and they want a Governor who acts on those values.”

An unabridged version of the public documents can be downloaded here.