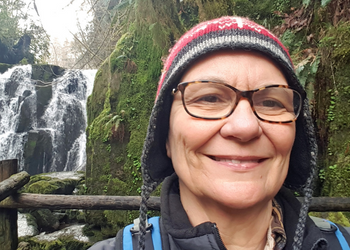 For much of her career, Kelly’s motto was, “See the USA with your resume.” To that end, she has worked on campaigns to protect wildlife and wild places in more than two dozen states and Washington, D.C., for groups such as American Bird Conservancy, Gila Watershed Partnership, Voyageurs National Park Association, and the Desert Protective Council. Most recently, she was the Energy and Mining Campaign Director at Western Watersheds Project.

While living in South Dakota, she was one of the earliest activists battling the Keystone XL pipeline, a fight that ultimately took 12 years and thousands of people to win. She learned from that struggle that even when a cause looks hopeless, as it certainly did in the early days in South Dakota, if enough people get involved, they really can be more powerful than industry dollars.

Kelly now lives on the wild and dramatic Oregon coast, where she is astounded daily that the rest of the state hasn’t moved here yet. She joined Oregon Wild’s staff in 2022.