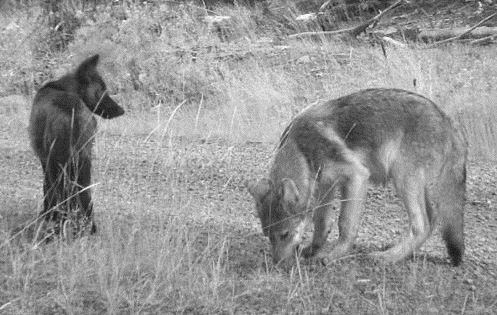 It’s been a busy last few days for Oregon’s wolves and those working to protect them, with new places, new dates, and new pups!

When I wrote to you last, it was about an important Oregon Department of Fish and Wildlife (ODFW) Commission meeting in Seaside. But there’s been a change! The agenda for that meeting has moved and the ODFW Commission will now be taking comments on whether to delist gray wolves on Friday, Oct. 9th in Florence, OR.

Please sign up to attend and testify on behalf of Oregon’s wolves. After all, they can’t testify for themselves! Feel free to email me if you have any questions.

I also shared with you a video of the Rogue Pack yearlings playing, caught by trail cam. These were Journey’s pups from last year, but it was also reported that he and his mate had produced another litter this year. Thanks to the US Fish and Wildlife Service, we have a look at these new pups -- just scroll back up to the top of this article!

Speaking of Oregon’s most famous wandering wolf, there is evidence that after nearly 4 years, another wolf might be following in OR7’s footsteps! The California Department of Fish and Wildlife announced this week that they were investigating reports of a “large, dark colored canid” in southeastern Siskiyou County that biologists believe to be a gray wolf. The state agency deployed trail cams and has discovered large canid tracks. If verified, this wolf would become only the second known gray wolf in California since they were extirpated in 1924.

This new California wolf likely dispersed from a pack in Northeast Oregon, but it is certainly not the only one exploring new territory. ODFW this week designated two new Areas of Known Wolf Activity (AKWA). OR25, who dispersed from the Imnaha Pack, has taken up residence in the Klamath County area, while OR30, who left the Mt. Emily Pack, is hanging around in Union County. Both wolves have been tracked by ODFW via radio collar.

This dispersal is vital to successful wolf recovery in Oregon (and California!), but so is protecting them. I hope you’ll sign up to join us in Florence and stand up for Oregon’s wolves.

If you're not able to make it to Florence, but still want to support wolf recovery, sign and share our petition or email the ODFW Commission!

Stephanie Taylor is the Wildlife Organizer for Oregon Wild