The Oregon Forests Resources Institute: “Government Agency” Of, By, and For the Timber Industry

It opens with two men who introduce themselves as Bob and Kirk: they are standing in a lovely stream with seemingly lush forests shading either side. Holding a glass of water, they explain to you that Oregon has “strong laws” that protect “cool, shady streams.” They even say that protecting water is “the right thing to do.” As Bob and Kirk go on to tell us about Oregon’s strong logging laws, the camera flies over the river, showing how clean it is, showing salmon in the water, and finally Bob drinks the water.

This “Bob & Kirk” commercial, like many others you may have seen in the last year, is from the Oregon Forest Resources Institute (we call them OFRI), which is entirely controlled by the timber industry. These commercials seek to convince Oregonians that logging rules in Oregon are strong, when in fact they are considered the weakest in the region. These commercials claim that Oregon’s laws protect “clean cool water,” when in fact many streams, including the one Bob and Kirk are standing in, regularly violate cold water and pollution standards. The weak regulations for industrial logging on private and State owned lands are based on the Oregon Forest Practices Act, and  do little to protect Oregonians, or their drinking water, from the damaging effects of industrial logging.

So what is the OFRI and why are they producing these deceptive ads?

OFRI is actually a “Government Agency” which is entirely funded and controlled by the timber industry. As discussed in this Portland Tribune article, the board of OFRI is controlled by timber companies, and they are making a habit out of ignoring science -- and reality -- in their efforts to advertise the products of Oregon’s forest products industry.

Tax money that could be going to support schools and infrastructure in Oregon counties is instead going to advertise corporate products with commercials online and during television programming like the Super Bowl. This means that while some Oregon Counties are partnering with timber companies to sue the State of Oregon to demand more logging, millions of dollars in tax revenue collected from the timber industry every year goes to advertise their own product and mislead the public about their environmentally devastating practices. Since 2014, OFRI has spent more than 3.5 million dollars of the over $10 million in tax dollars it has collected on advertising designed to tell Oregonians a one sided story.

It is pretty obvious who benefits from the misleading “educational outreach” on which OFRI is spending millions of dollars a year: just look at who sits on the board of directors for OFRI. It turns out that Oregon’s timber harvest is not dominated by local logging outfits facing accountability from the communities in which they operate. Instead, the timber industry in Oregon is largely owned and operated by multinational corporations and investment firms, here are some examples of who is calling the shots in how timber these timber taxes are spent:

After their recent acquisition of Plum Creek (another enormous clearcutting operation) Weyerhaeuser is worth over $23 billion, and owns more than 13 million acres of land. Weyerhaeuser regularly donates tens of thousands of dollars to the Oregon Forest Industries Council, the timber industry lobbying group who recently sent both their President and Vice President to the Board of Forestry to argue against science that clearly showed Oregon’s forest laws are leading to high stream temperatures that kill fish and violate standards.

Stimson, another timber giant, did a great job of demonstrating just how weak Oregon’s logging laws are when they helped to clearcut over 80% of the watershed that provides drinking water to the community of Rockaway Beach. After clearcutting directly over streams that feed the community’s water supply, Rockaway had to spend millions to upgrade water treatment facilities. Check out this short film about Rockaway Beach.  Stimson and other logging companies aren’t held accountable for the damage they do to communities, in large part because their operations are legal under Oregon law. Stimson spent nearly $200,000 ( Source: ORESTAR) in the last 2 years on political spending in Oregon, sending all that cash to groups such as the I Will Vote Like a Republican Should Committee and the Oregon Forest Industries Council, who is helping pay for that lawsuit against the State of Oregon.

GreenWood Resources has nearly 1 billion in timber assets. Tied to Wall Street investment firms, they look at our backyard forests and see dollar signs for investors. This company is a prime example of a concerning trend of Oregon’s forest ownership. In the last 2 decades, over 85% of the nation's timberlands have changed hands, often bought up by multinational corporations. According to Ernie Niemi, President of Natural Resource Economics, this has a negative impact on Oregon’s communities. Mr. Niemi explains:

“Instead of being owned by a local family that realizes some responsibility to the members of its community, those lands are now owned by large corporations, by insurance companies or by other major investors that are solely managing those lands to generate short term income for the shareholders of the company."

These are only a few examples from the eleven seats on OFRI’s board of directors that are filled by timber interests. These corporations, and others like them, have been tasked and funded by the Oregon Legislature to:

Despite this clear mandate requiring OFRI to work with scientists, community organizations and conservation groups, the agency continues to focus on industry talking points and products, and has no scientific or conservation representation on their Board of Directors. OFRI isn’t doing outreach and education about the science that recently led the U.S. EPA and National Oceanic and Atmospheric Administration to cut off over a million dollars in federal funding because “Oregon hasn’t done enough to prevent pollution from forestry practices like logging and road building.” In fact, OFRI is out there using tax dollars to mislead Oregonians into thinking the exact opposite.

It is time to take a close look at this agency and their spending. It is time for Oregon to be honest with itself about what this industry is doing to our forests. Oregon can take the lead in forest practices and set the example for the world on how to keep forests working, while standing up for the health and safety of our citizens, our water, and our climate. 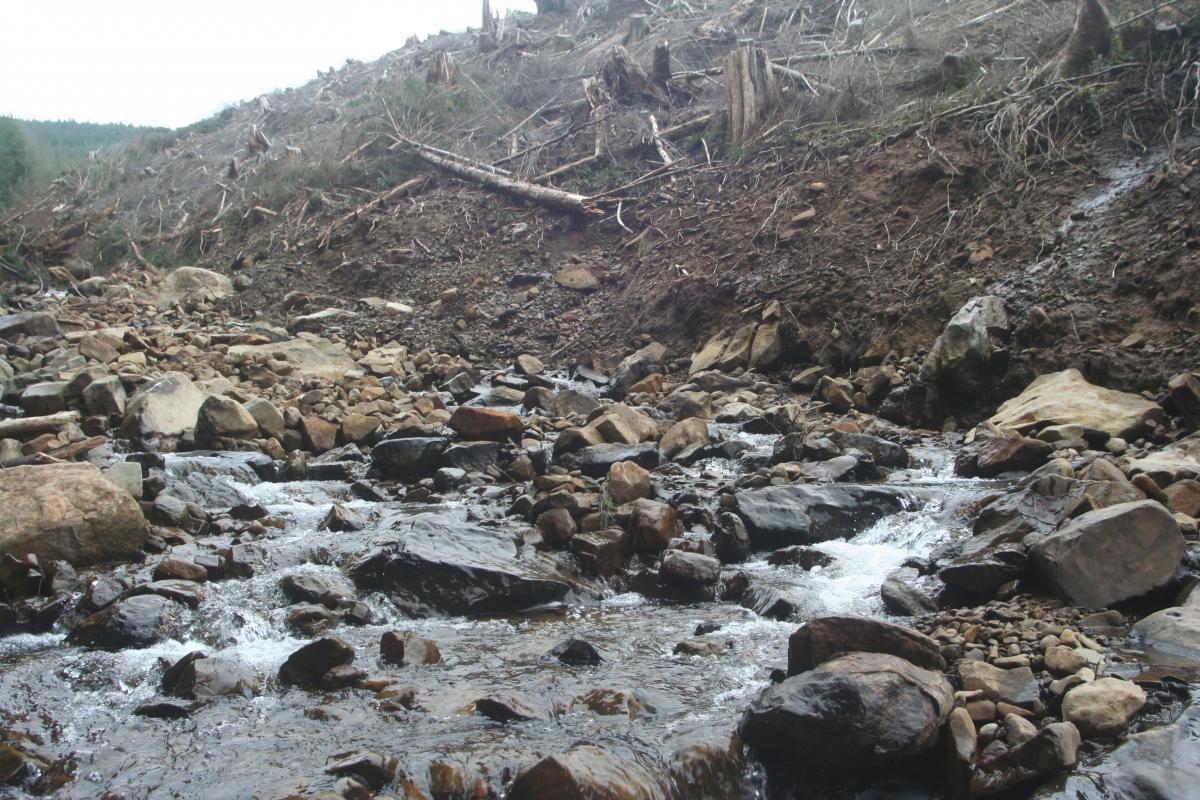 For more information about industrial logging on Oregon's privately owned forestlands, check out the Private Forests Profile on our website.

To get connected with Oregon Wild, and let us keep you updated on this issue, as well as what’s really going on with Oregon’s drinking water, aerial pesticide spraying, landslides, and other ways Oregon’s logging laws are failing the people, and failing the planet. Sign up here.