Reflections from the Wallowa Wolf Rendezvous 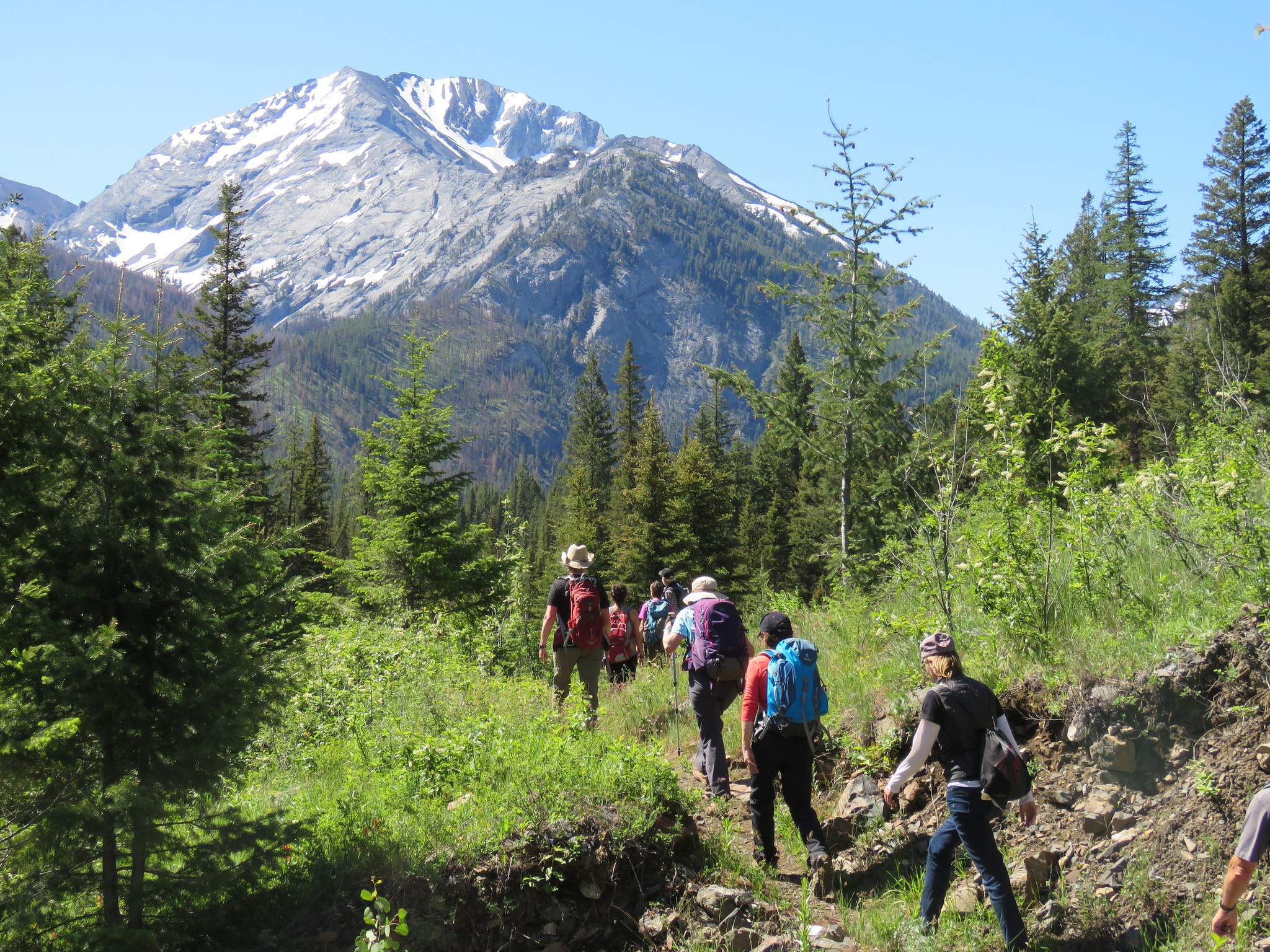 It was Oregon Wild’s 7th annual Wolf Rendezvous that brought me to eastern Oregon for the first time. Driving on highway 82 into Enterprise, you descend into the small town with the most breathtaking view of the Wallowa Mountains to the east. Known as the Alps of Oregon because of its jagged rows of snow covered peaks, the Wallowas range over 40 miles across the horizon and contain 18 peaks over 9,000 feet and several Wild and Scenic rivers. In the heart of the Wallowas lies Oregon’s largest wilderness area, Eagle Cap, that boasts over 350,000 acres of rugged, undeveloped country. This is where I’d be spending the next four days of what would be an incredibly unique and fascinating journey into wolf country and politics

The purpose of this trip was to gain an understanding and appreciation of plight of gray wolves in Oregon. At the time, it had only been weeks since a ten year old wolf known as OR-4, his pregnant mate, and their two pups were shot dead from a helicopter due to repeated cattle depredations. This hurt, knowing the wolf population in the entire state of Oregon to be roughly 106, a delicate tribe without much protection since gray wolves had been delisted from the state Endangered Species Act in November 2015. To be honest, after what had happened since November, I was doubtful we’d see a wolf, but given the chance it was absolutely worth a try.

We met our fearless leaders Rob Klavins, Wally Sykes, and Lena Spadacene at our base camp in the foothills of the Wallowas. After meeting our Rendezvous group, we hiked to an outcrop that overlooked this great expanse of land: the agricultural community laid below us, to the east was Zumwalt Prairie and just beyond that was Hells Canyon and the Blue Mountains. The view was so clear you could see Idaho and Washington from where we stood! After getting oriented to the land and where we’d be going, we trekked back down to camp, eager to start our journey the next morning.

The next few days were a spectacular blur. On Friday we were out the door at 8am to meet with Roblyn Brown, Wolf Coordinator for the Oregon Department of Fish and Wildlife. She dedicated her entire morning to speaking with us about wolf management, wolf biology, the collaring process, tracking systems, and more. She answered every question we voiced, and by the end we were brainstorming ways on how to better work together. When asked what was the most surprising thing she learned while working with wolves was, she responded that people can be awful, and that really resonated with me. What had Roblyn been through, not only in managing wolves, but the people who love and hate them as well?

Later than evening we met with Wallowa County Commissioner Chair, Susan Roberts, at Barking Mad Farm. Susan was born and raised in Wallowa County and had seen wolves disappear and come back over the past several years. While her and I personally disagree on wolf management, we had a lively discussion on how the county has changed (or not) while we scarfed down a delicious homemade dinner prepared by Emily Klavins. Exhausted, we took a minute to see the sun set, and made our way back to camp for a warm fire.

The next day we met up with former U.S. Forest Service employee and ethno-biologist, Ralph Anderson for a guided tour of the Zumwalt Prairie, the largest remaining bunchgrass prairie in the country. This incredible piece of land is home to several different raptor species, elk, deer, coyotes, fox, and ground squirrels, among other creatures. Not only were we learning about the land and seeing some of the animals that live there, we also got to taste it! We tried Biscuitroot, wild onion, and a few other flowers and roots.

We eventually made our way up to an old Native American summer camp where we saw remnants of bark peeling, and the use of cambium as a food source. You could almost feel the old spirits walking with us, and I tried to imagined what the camp looked like hundreds of years ago.

For me, one of the highlights of this trip was going to a sacred spot on the lip of Hells Canyon, the country’s deepest river gorge (yes, deeper than the Grand Canyon!). It felt incredibly spiritual looking out over the ice carved land to the Blue Mountains, and reflecting on how and why I came to be there in the first place. It’s a moment I’ll never forget. 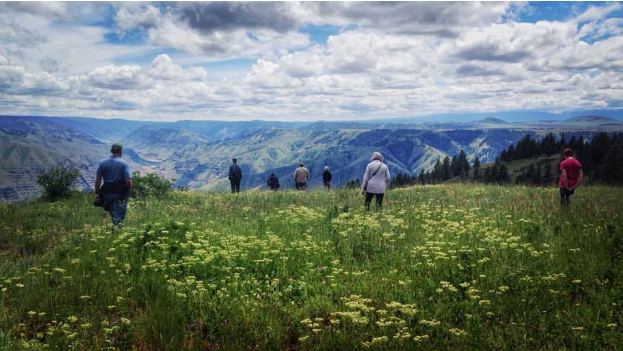 That Sunday morning was the official end of the Wolf Rendezvous, but with the option to stay and hike Hurricane Creek Trail just outside of Enterprise. Unsurprisingly, the entire group opted to stay! A word about this year’s Wallowa Wolf Rendezvous group; they were incredible. We all came from different walks of life but had one thing in common: our love of wolves and the natural world. To Linda and Dave, Kathy, Brenda, Ben, Megan, Mary, Rob, Ralph, Lena, Wally and Koda, thank you for making this trip what it was. It wouldn’t have been the same without you!

As I reflect on my time in the Wallowas, I think about what the point was. Yes, it was to potentially see a wolf, yes it was to go to the epicenter of the wolf debate, and yes it was an opportunity to get different perspectives on this important wildlife issue. But it was also more than that. I think we all left with a renewed sense of hope for the future of Oregon’s wolves. Oregon Wild made it so that we must have these conversations without being disrespectful and name calling, we must talk openly about this issue and have debates with multiple stakeholders, and we must advocate for a future that includes wolves and cattle ranchers living in balance. Oregon Wild and Rob Klavins have done something incredible, and I couldn’t be more honored or proud to have been involved.

If you’re interested in signing up for the next Oregon Wild Wolf Rendezvous, check out our website at www.oregonwild.org. Many thanks to Mountain Rose Herbs and Oregon Wild for making this trip possible!

The Wolf Rendezvous 2016 did not disappoint.  We didn’t see a wolf, but our group of 10 campers did experience all manner of wolfness:  biology, habitat, trail cam photos, scat, and Rob Klavins’ terrific wolf call.  The ODFW wolf biologist drove from La Grande to devote a morning to our education.  A lifetime Wallowa County resident naturalist devoted a full day to our enjoyment of the Zumwalt Prairie, in full wildflower bloom and waving grasses, as well as the deep and glorious canyon west of Hells Canyon, in layers of ancient geology stacked in hues of green and gold.  Naturalist Ralph Anderson illuminated our understanding of early Nez Perce residents, dug allium root for a sweet and spicy taste test, and told us of spiritual customs that supported the tribe before they were removed from their beloved Wallowa homeland.

From breakfast cooked by Oregon Wild staff, to staff naturalist interpretations, to a broader understanding of wolf and rancher behavior, this experience is a full 10!  We all felt privileged and well fed by the extraordinary beauty of Wallowa County and the sense that the ground we walked on was shared by a lofty predator that roams the area.  Hats off to Oregon Wild for tireless efforts to return the wolf to the ecosystem and cycle where it belongs.