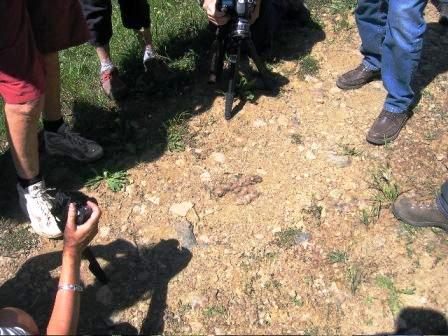 Written by a participant in the 2011, Oregon Wild Wolf Rendezvous:

Last weekend, I was privileged to be able to take a journey to northeastern Oregon, where the first wolf pack to return to Oregon resides.  It is an area of great beauty, bounded by the majestic Wallowa Mountains and bordered by the amazing Zumwalt Prairie.  It is also an area of great controversy and contention, an area in which the main enterprise is cattle ranching, and in which many of the cattle ranchers are rabidly anti-wolf.

There are also many people in the region who favor the return of wolves and there are a few good folks who stand between the factions, trying to find ways for wolves and ranchers to co-exist, while trying to understand the complexities of the relationships between the top predators and their prey(s).  Some of these folks have attained the status of hero in my eyes, and in the body of this blog, I will explain.

Our base camp was located high on a treeless hill, owned by James and Diana Hunter, who own the Barking Mad Farm B&B in Enterprise.  They have built a small cabin there, which they will rent out as an adjunct to the B&B.  They allowed us to use the cabin's restroom and other facilities, but there wasn't enough room for thirteen people in the cabin, so we pitched our tents around the place.  The view from my tent wasn't bad.

The first evening, we met Jim and Holly Akenson, wildlife biologists who ran a wilderness research station for the University of Idaho.  They studied the changes in both the animal and plant lives when wolves returned to Idaho.  They told us how complex it is to determine whether an animal which has been killed by a predator has been killed by a wolf, or some other predator.  This has become a major issue because there is now a state fund to compensate ranchers for cows which have been killed by wolves.

The ranchers want the determination to be made quickly and  argue that there are some basic signs which make the determination obvious if it is wolf predation.  The biologists say this is not always so, but that the man who is charged with making this determination is under intense pressure to decide on the spot.

The next morning, we met with that man, and he is one of those I regard as a hero.  His name is Russ Morgan.  He is the Oregon Department of Fish and Wildlife (ODFW) Wolf Coordinator.  His job is to implement the wolf conservation plan and make Oregon wolf recovery successful while addressing the concerns of those who will be affected by that return. 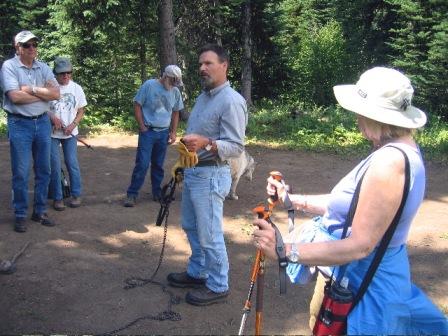 Here is Russ, showing the group the trap he uses to catch wolves and fit them with radio collars so they can be tracked.  This modified trap does not hurt the wolf.  Russ snapped it in his own hand and didn't flinch.  The radio collars have told wildlife biologists and ODFW a tremendous amount about wolf behavior.  Russ is frustrated because he does not have the time to put this information to broader use, as he finds about 90% of his job is taken up with determining whether or not rancher claims of wolf depredation are true. Russ has been vilified in the press, even threatened.

He lives with a series of onerous responsibilities.  When ODFW decided that two of the Imnaha Pack wolves (The pack in the Wallowas) had to be killed in an attempt to deter other wolves who had killed calves, Russ was the one who had to carry out the executions. This is not something he wanted to do, but felt he had to do in order to make it possible for the rest of the pack to have a chance.  There have been wolves killed illegally, but the perpetrators have not been identified. Russ tries to be scrupulously honest, but the ranchers argue that he is biased in favor of the wolves.

There are some data that need to be considered here.  In Oregon, there are over 1.3 million head of cattle on the range.  Of these, about 55,000 die every year from causes ranging from disease to accidents to predation from predators other than wolves.  In Oregon, there have been 21 confirmed kills of cattle by wolves since the arrival of the Imnaha Pack.  This seems like a problem which is a drop in the bucket, but it's not, if the cattle being killed by wolves are your cattle.  The ranchers point out that they are allowed to kill other predators if they catch them near their herds, but they are not allowed to kill the wolves because they are protected.  They see this as an unwarranted intrusion by the Government.  Many of them, however, have allotments which give them the right to run their cattle on federal land for $1.87 per animal unit, which means a mother cow and one calf.  So, the Government gives and takes away and they don't like the taking away.

Russ Morgan is developing the skills which might make him a good Secretary of State. He needs them.

We didn't get to see a wolf on this, or any other day, but we did see some wolf scat.

The main feature, beside the size, is that it was full of Elk hair.  This was not a hungry wolf, for the moment.  We also learned that wolves cover huge amounts of ground.  Their range may be hundreds of miles.  Russ has seen GPS-collared wolves that have covered fifty miles in one day.  One of the collared wolves of the Imnaha pack split off from the pack and was found in Fossil, Oregon, about 175 miles away.  Russ argued that the return of wolves to Oregon was probably inevitable.  Wolves are protected in parts of Canada.

For the wolves near the border, the easiest route of dispersal would be south, into the U.S. The deliberate reintroduction of wolves to Idaho and Yellowstone certainly hastened the process, but did not really start it.  Wolf Packs almost always have members who leave the pack and go off on their own.  Since there are both males and females who do this, it is highly probable that lone wolves, traveling in country where there is good prey, will find other wolves.  If they can mate, they will, and a new pack will be born.

Wolves' favorite prey in the west is Elk.  Where there are Elk herds, there will be wolves.  If wolves are eradicated, the Elk will proliferate.  They will break down stream beds where they congregate to eat the willow and aspen, and they will denude their own food supply. The Yellowstone Elk herds were overpopulated and in bad shape before the reintroduction of wolves.  Now they, and their landscape, are much healthier. 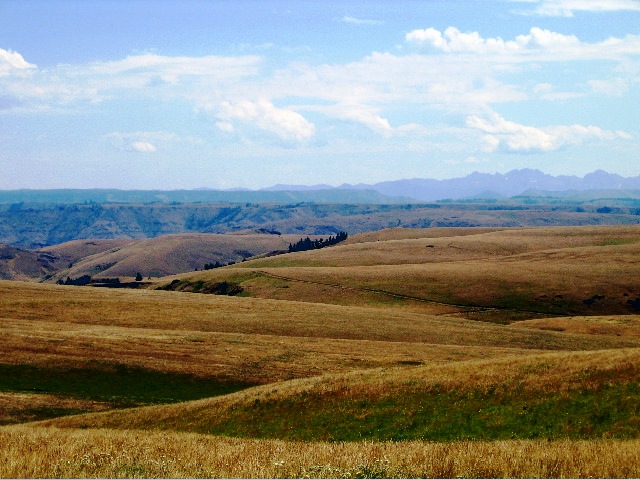 The second day, we visited a magical place, the Zumwalt Prairie.

Here, looking toward Idaho in the far northeast corner of Oregon, is a high, rolling grass land where Elk herds come during the winter months.  This is also Government allotment range, and some of it is privately owned.  So, from October on, there are large numbers of Elk and cattle on the Zumwalt and there are wolves.  Thus, there are all the ingredients for controversy.

The Zumwalt is amazing.  It undulates across the land, rich in grasses and wildflowers.  It is the area of the greatest concentration of Raptors in the Lower forty-eight states, I am told.  We saw several different kinds of hawks, Ferruginous, Red tailed, Rough-Legged, Kestrels, etc., and both Bald and Golden Eagles.  We watched Hawks glide in over the tips of the grasses and catch field mice.  We saw small herds of Elk grazing, and cattle gathered around water holes.  A Coyote stared at us before moving on up a rise and disappearing into the underbrush.

We explored a pond, looking for hoof and paw prints in the dried mud adjacent to it.  The air close to the ground was filled with iridescent blue dragonflies.  There were so many that when I looked down one time, it seemed like a carpet of blue was in motion across the land. 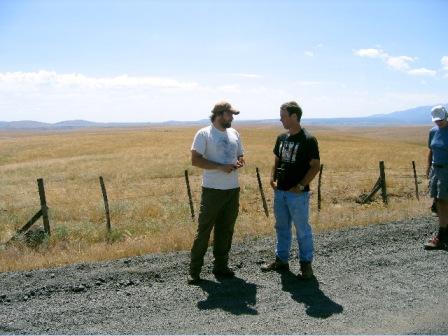 Another of the heroic people is Rob Klavins, here on the left.  He was our leader.  For less than a beginning school teacher makes per year, he works for Oregon Wild, leading trips, attending meetings with the Cattlemen's Association, and trying to counter the misinformation which flows daily from the anti-wolf people.  He is a kind, deeply knowledgeable, hearty man who loves this area even though there are many in it who revile him.

The Zumwalt borders the Hell's Canyon area.  The canyon below is where the Imnaha River flows, on its way to the Snake River, just to the left.  This is where the wolves which have come from Idaho cross into Oregon.  Yes, they swim the river.

I am sorry that my wife could not go.  I wanted her to have this adventure; even more, I wanted us to have it together. That being impossible, however, I loved the chance to go. The weather was wonderful, even on the last night when a powerful thunder, lightning, wind, and rain storm moved over us.  Before the clouds filled the sky, I got this last shot of the approaching storm 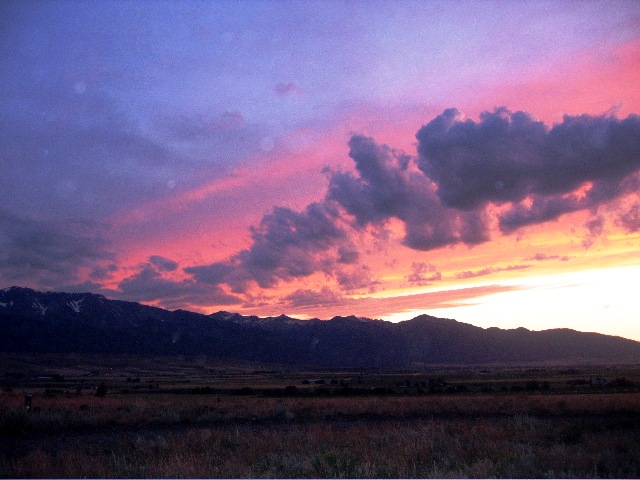 I would like to close with this.  There is new research which points out the importance of large predators for the health of the natural world, you know, the one in which we all live.

There are many fine environmental organizations which are doing their best to protect and save this world from human depredation.  They help us learn, change our thoughts and habits, and set aside tracts of land for the movement of herds and the dispersal of species.  They protect the food chain and support scientific investigation which helps us better understand that which we seek to either keep, or exploit.  I am sure that those of you reading this don't need me to tell you, but I hope that if you can, you will do what you can to help those organizations and the world.