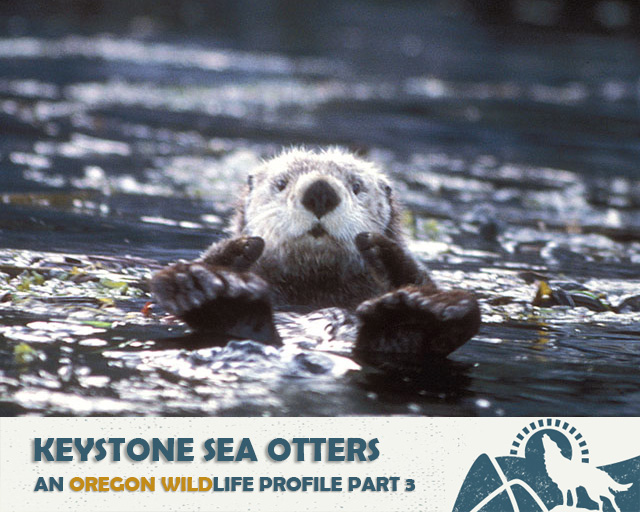 We've discussed the daily life of a sea otter, and their near extinction in previous installments. But sea otters are also incredibly important to coastal ecosystems. Here's why:

What does it take to get a few good otters around here?

I’m debating the name of the Disney movie I will shortly produce. It will feature no less than six talking otters. Three of them will play musical instruments. One of them will turn into a princess when the moon is full her lover is nigh. I may sign over the rights of the hit single to the Glee cast, if it’s still a thing – Lea Michele is pretty squeaky from what I remember.

My point? Otters are loved for their squeal-and-hug-myself cuteness, but that seems to be the only thing anyone knows about them. Cuteness-factor shouldn’t be the only path towards reintroduction to the Oregon coastline, because, dammit, they’re actually important to the environment – keystone-species-level important in fact.

The sea otter could change things at the ecological wonderland we know as the Oregon coast. I’m talking earth-shaking changes for the better – like a reverse Donald Trump presidency. The sea otter is a keystone species in the Pacific Northwest. That doesn’t mean they indulge in red solo cups full of cheap beer. Rather, their role in the environment has a far larger ecological effect than other species in the same environment. Sea otters are the lone-rangers of the kelp forests that sway gently beneath the coastal waters like your grandma with a cocktail on Thanksgiving. They hunt down the voracious marine animals that eat the kelp forests, and in doing so, leave no shelter for many other marine animals.

Those voracious critters are sea urchins, and in this case, please, sir, no we don’t want some more. The detestable urchins leave geese, crabs, snails, kelp, and other marine animals without food or shelter. These kelp forests are also massively important gobblers of atmospheric carbon dioxide. When the kelp forests wither, your world gets just a tad hotter. (If you like it hot, go live in Florida… now.)

Never fear! A hungry otter is near!

Or at least that’s what I would say, if the sea otter still existed in Oregon. Since the last native Oregonian sea otters were killed in 1906, Oregon has perpetually faced the potential for a kelp-crisis as per our neighbors to the south in California. Take a look at the Escondido Case Study. Since the 1960s, the kelp forests off of Escondido Beach (Los Angeles County) have been turned into a type of aquatic wasteland known as an ‘urchin barren’. These urchin barrens are bleak in vegetation but swarmed with marine invertebrates, of which the urchins would probably tell us they are the overlords if they could talk. Think Mad Max, but with more water and less Mel Gibson.

What’s that? Geez, so many questions – take a look this example from Washington. These recovery plans are the foundation on which the reintroduction of the sea otter can occur. Without this plan, nothing much is going to happen.

The way to get the recovery plan started is to fund a Kickstarter campaign. I’m kidding. What you can actually do is let the Oregon Department of Fish and Wildlife know just how important it is to you. Please, send them a letter or two – or three. Let’s get this going now so that we can enjoy the otters, and the ecology they protect, before the urchins’ stomachs ruin everything. Need another reason to help? Fine – I’m withholding my otter musical until reintroduction is successful.