Update: As of June 11th, 2019, after a lengthy court process, two judges rejected the Summit OHV proposal, and the Forest Service chose not to appeal their decisions to the 9th Circuit. From hunters and hikers to anglers and equestrians, people who know and love the Ochocos were united in their opposition to this project. Oregonians who treasure elk and mule deer, and who support conservation and responsible uses of our public lands, can breathe a sigh of relief.

Below is information about the formerly proposed Summit Trail OHV proposal

An OHV trail system in the heart of the Ochocos?! Check out the map below to see the span of this project. 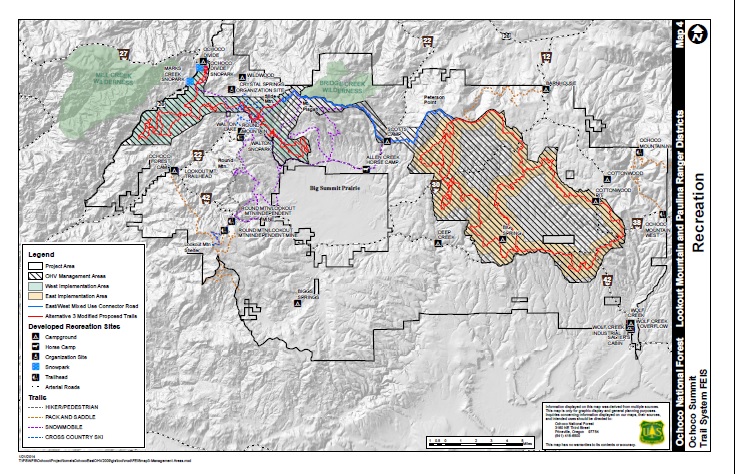 To see a more detailed map check out the East half and West half of this project.

As you can see from the map above, the Summit OHV proposal spans much of the Ochoco Mountains from east to west and would allow quads, motorbikes, side-by-sides and Jeeps.

The ecological and recreational impacts of the OHV proposal are significant. The noise pollution from OHV use disrupts many forms of wildlife, including the Rocky Mountain elk that inhabit this region. The additional roads and noise accompanied by the Summit OHV proposal would cross through summer range habitat for the Ochoco elk herds, causing dispersal of the animals up to 3/4 of a mile. This can cause significant impact and habitat fragmentation, forcing herds onto adjacent private land.

Soil compaction and stream degradation are other ill affects of OHV use, and as this proposal crosses through several important tributaries of the North Fork of the Crooked River, it would adversely affect native fish habitat and riparian health. With an already fragmented and struggling population of rare redband trout, this proposal would cause further damage to remaining habitat in the Crooked River Watershed.

From a recreational perspective, OHV use displaces other user groups in the area, such as horseback riders, hikers, and mountain bikers. The OHV project does not meet purpose or need for the Ochoco National Forest, as there are approximately 1,000 miles of existing OHV trails in Central Oregon alone.