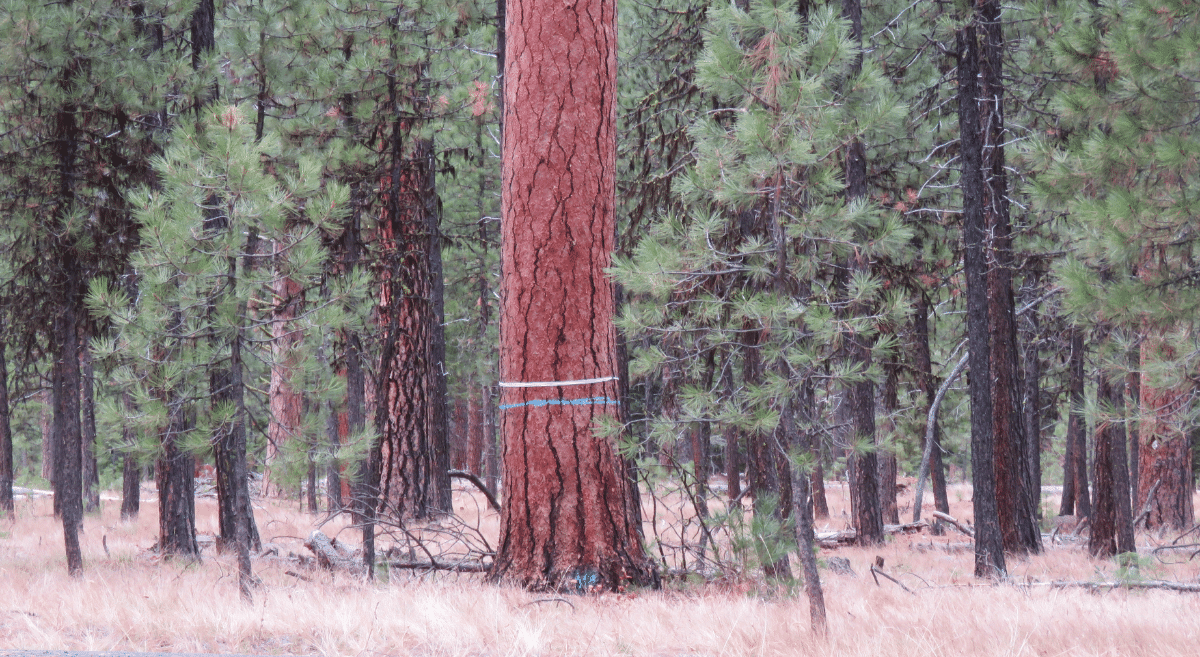 On January 18, 2021, a Trump appointee signed a decision that removed protections for mature and old-growth trees on over 14,000 square miles of public lands in Eastern Oregon and Washington that had been in place for over two decades. Doing so cut short an already controversial process and left the public with no alternatives other than to accept the rollback or go to court.

On June 14th, 2022, conservation groups announced a legal challenge to the change. Below, please find an FAQ on this lawsuit. You can find more resources here, including a more comprehensive FAQ.

In addition to the groups filing this legal challenge, we appreciate the efforts of the Blue Mountains Biodiversity Project, NRDC, and others in creating this document and advocating for our public lands and forests. We have also done our best to meaningfully consider the important perspectives of Indigenous People including, but not limited to, the sovereign Nimiipuu (Nez Perce) Tribe.

1.   What is the lawsuit about?
2.   Who is taking the agency to Court?
3.   What’s at stake?
4.   Why are you filing a legal challenge?
5.   Why now?
6.   Could this have been solved without going to court?
7.   What do you hope to achieve?
8.   Why are enforceable and measurable protections on federal forest lands essential for large and mature trees?
9.   How does the new Biden Executive Order on old-growth relate to this litigation?
10. What’s Next?
11. How can I learn more?

1)    What is the lawsuit about?
After decades of unsustainable logging, conservation measures were put into place in the mid-1990’s to protect, restore, and manage Northwest forests. West of the Cascades, the Northwest Forest Plan provided comprehensive plans and guidance. As the timber industry turned its eyes eastward, rules called the “Eastside Screens” were put into place until more comprehensive protections were developed. Among the most important rules was a prohibition on logging the largest trees (≥21” in diameter) in Eastern Oregon and Washington.

The US Forest Service (USFS) never followed through on its promise to create comprehensive plans and protections, so the Screens remained. While exceptions were frequently made, the timber industry and their allies always chafed at the rules. In 2019, Lame-duck Congressman Greg Walden encouraged ex-president Donald Trump to do away with the rule.

In the early days of the pandemic, the USFS began a process to change the rules. Conservation organizations argue that in doing so, the agency and administration violated numerous bedrock environmental laws that protect fish and wildlife habitat, clean water, the right to public participation, and other fundamental American values.

2)    Who is taking the agency to Court?
Represented by CRAG Law Center, on June 14th, six conservation groups filed a legal challenge to the Forest Service’s rollback, as well as a Notice of Intent to enforce Endangered Species Act protections for fish and wildlife that depend on large trees and older forests. The notice also asks for immediate corrective action.

Dozens of other conservation, climate, Indigenous, and public health organizations have also opposed the rule change along with thousands of citizens, hundreds of scientists, and even former USFS leadership. Given the seriousness of the claims, the groups anticipate additional legal challenges may be forthcoming.

3)    What’s at stake?
The Screens protected just the largest 3% of trees on USFS land in Eastern Oregon and Washington. The rules were primarily meant to protect wildlife that depend on large structure, mature forests, and old-growth. For decades, they did just that. They also provided other benefits.

Recent science has shown that large trees play a disproportionate role in combating climate change. The 3% of trees this rule protected, store 42% of the carbon in these forests. They also store carbon more quickly and efficiently than smaller trees. These large trees are also among the most fire-resistant on the landscape. In addition to their role protecting wildlife and our climate, these trees, and the forests they are a part of, help maintain soil health, filter water, cool waterways, and provide immeasurable spiritual values.

While some conservation groups have, in the past, agreed to site-specific exceptions to the rule, we’ve seen how the agency intends to employ the Trump rule changes. In a project touted by the agency and logging collaboratives as an example of how they want to see the new rules implemented, the Big Mosquito Project was supposed to protect and enhance large trees. Instead, the project led to old-growth logging without consequences.

The Forest Service is using the new rule to propose logging large trees on thousands of acres of national forest across eastern Oregon, including on previously unlogged forests in the Hells Canyon National Recreation Area and right up to the edge of the Eagle Cap Wilderness. Other projects have been proposed or are in development on the Fremont-Winema, Ochoco, Umatilla, Malheur, Wallowa-Whitman, and other National Forests.

Individually and collectively, these projects will damage wildlife habitat, contribute to climate change, deplete important carbon stores, and harm other environmental, social, and cultural values at a time when we simply can’t afford to move in the wrong direction. Further, the Screens played an important role in creating an environment where many stakeholders were able to find common ground. The Screens rollback has broken public trust, undermined collaborative efforts across the region, and is already leading to unnecessary conflict and controversy.

4) Why are you filing a legal challenge?
Simply put, the Forest Service broke the law.

A bedrock principle of American democracy is that no one is above the law. Citizens have the right to make sure even government agencies are accountable to their own laws and rules.

5) Why now?
The organizations made efforts to work with the Forest Service, the Trump and Biden administrations, Senators Ron Wyden & Jeff Merkley, and other decision makers to chart a different path forward.

Since the decision to weaken the Screens was put into place, the agency has been put under tremendous pressure by the timber industry and logging collaboratives to put them to use. Now that the agency has begun putting out and developing controversial projects that log our largest and most fire-resistant trees, and sensitive forests, the harms are no longer abstract.

6) Could this have been solved without going to court?
Yes. Despite their misgivings, these conservation groups, along with citizens, scientists, and other stakeholders raised concerns, offered solutions, and participated in the process in good faith.

The decision by a political appointee ended the already flawed, and incomplete, process, affirmed suspicions that it had been politically driven and had a predetermined outcome from the start. It also closed the door on additional public involvement that had been promised by the agency.

That meant that those who objected to the decision had only two choices- stand down and lose critical protections for large trees and old growth, or go to court.

For over a year, numerous groups have reached out to the Biden administration to use powers granted by an Executive Order to review the decision (even the Washington Post included this as a Trump Administration rollback the administration could do something about), and sought other avenues to resolve the conflict.

With projects being developed and rolled out under the new rules, the organizations were out of options. The Biden administration has begun to recognize the importance of mature and old growth forests in the fight against the climate and biodiversity crises. The groups have called on Senators Wyden and Merkley to honor their - and the president’s - promises by revoking the Trump rule and starting over in good faith using a democratic process that honors the best available science and 21st century values.

7) What do you hope to achieve?
Once the Trump rule is revoked, conservationists and others stand ready to work in good faith with the Forest Service and other stakeholders to create the long-promised rules to ensure healthy functioning landscapes and vibrant human communities.

To the extent that our national forests belong to anyone, they belong to all of us, equally. The process to create those rules must be fair, inclusive, equitable, and science based. They must also meaningfully consider Indigenous perspectives and honor Treaty rights.

8) Why are enforceable and measurable protections on federal forest lands essential for large and mature trees?
Following the amendment, large tree logging is already being proposed in multiple timber sales on multiple forests. That indicates the amendment will be used to allow logging of large and mature tree stands on thousands of acres of National Forest land across eastern Oregon and southeast Washington.

In addition, by replacing an enforceable standard with a guideline, it opens the door to more conflict and confusion related to the Forest Service’s adherence to the Endangered Species Act on proposed logging projects. In the absence of enforceable standards, the decision to log trees over 21” in diameter is up to the discretion of the Forest Service staff implementing a project, and we have already begun to see how that is playing out in destructive and controversial ways.

9) How does the new Biden Executive Order on old-growth relate to this litigation?
On Earth Day, the Biden Administration issued an Executive Order to the US Forest Service and Bureau of Land Management to inventory the mature and old-growth forests that America has left. Scientists and conservationists across the country applauded the action as a welcome first step towards protecting our forests.

However, in too many places, our largest and oldest trees, and most intact forests, are still being cut down. Their carbon is going back into the atmosphere, and the other important values they provide are disappearing with it. The Executive order does not address these projects or provide immediate protections.

Rather than defend the Trump administration’s destructive decision, the President should direct the Forest Service to stand down and restore protections for big, old trees in Eastern Oregon and Washington that have stood for decades.

10) What’s Next?
The Forest Service has a number of options to choose from. They could take corrective action and address their violations of the law or work with plaintiffs on a solution. They could revoke the rule-change and restore the Screens.

On the other hand, they can choose to defend the Trump administration’s illegal decision to remove protections for mature and old-growth forests and trees.

The agency can find a solution that doesn’t require a winner-take all decision from a judge. We hope Senators Wyden and Merkley will urge the Biden administration to withdraw the Trump decision, restore protections for the large and old trees of Eastern Oregon and Washington, and work in good faith with all stakeholders to craft a solution, as promised over two decades ago.

Given the number of organizations and individuals who opposed this rule change, it is also quite possible that other legal challenges are forthcoming.

11) How can I learn more?
You can find more information including scientific reports, public input, presentations, media coverage, and more here.

Another nice resource from Green Oregon is here.

In 2020, conservation groups put together a comprehensive FAQ that answered many related questions about the Screens, relevant science, and more. You can find it here.