Welcoming Wolves Back to Southern Oregon 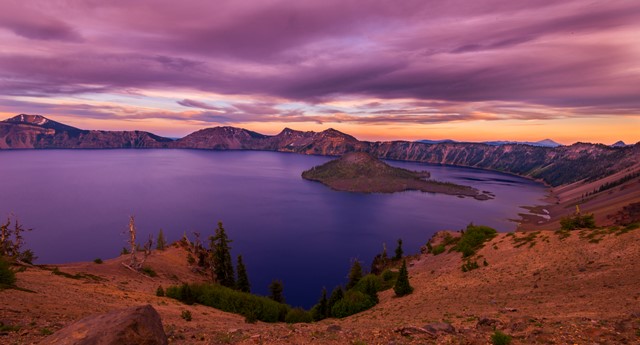 The final night of the first Oregon Wild Crater Lake Wolf Rendezvous. Debriefing time. Jonathan Jelen, Development Director for Oregon Wild, tells the eleven of us sitting in a tight circle around a crackling campfire that we need to relish our victories in the wolf world, as things don't always go well. He’s right; wolf advocacy is often fraught with disappointment as we battle the mythology and misinformation that surrounds Canis lupus. Yet throughout this event, camped along the Rogue River or on excursions nearby, we enjoyed four productive and memorable days together, learning about wolves and building friendships with like-minded people. This is the kind of success that keeps us going.

We met on a rainy afternoon at Union Creek Campground in the Rogue River National Forest. The river flowed behind us while the rain washed us from above. We sought dry patches of ground to pitch our tents. By the time our bountiful potluck dinner was arranged on a picnic table, the rain had ended. We were gifted with autumn warmth and clear skies for the rest of the weekend. 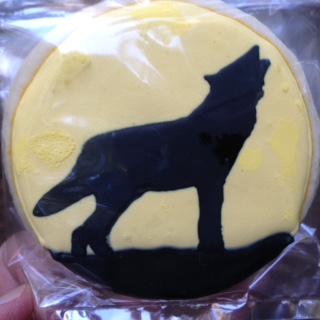 After dinner, introductions were made and Jonathan delivered a comprehensive description of Oregon Wild, including the history of the group and their current campaigns. This was followed by an in-depth a look at wolves in Oregon, from their eradication in the 1940s to their status today. Dessert came next, with brownies and cookies made by Linda, a wolf fan enjoying her first rendezvous. Linda had stenciled each cookie with the figure of a wolf, a perfect replica of the Oregon Wild bumper stickers.

John Stephenson, biologist with the US Fish and Wildlife Service, was at our campsite next morning at nine. He explained that the still healing scar on his left cheek was not from a wolf, but proof that soft balls are not soft. John led the way, the rest of us in vans, out of the Rogue River National Forest, alongside Crater Lake National Park, and into the flatlands south of the park. We stopped along the road to gaze at Mount Mazama and hear John discuss ranching practices in the area under the influence of wolves. OR 7, better known as Journey, had passed near this spot when he first trekked down from northeast Oregon in 2011. And he was back in the vicinity again, this time with his black mate and their two seasons of offspring.

Our next stop was on a narrow dirt road. John jumped out of his truck and waved us to join him. In the middle of the road sat a fairly fresh pile of wolf scat. If one did not know the particular passion wolf advocates hold, they’d be shocked at the attention a find such as this creates. We circled the scat, murmuring our appreciation, and John set his little ruler beside it to gauge for size. Photos were snapped. I didn’t time the stop, but we must have been there for thirty minutes, asking questions and staring at the impressive pile of wolf scat that lay before us.

Finally, John led us to another spot he’d scouted out the night before. There we saw wolf tracks, some old, some new, in the soft dirt of at the edge of the road. On our first night, Jonathan had asked us what our expectations were. Some had said they hoped to see wolves, some joked that they’d like to go home with a wolf puppy or two. But, seeing tracks and scat, true evidence of the return of wolves to southern Oregon, turned out to be enough. We were thrilled.

Lunch was enjoyed on a sunny meadow. Layers of clothing were shed as the day warmed. A few of the group wandered up the road. Bindy, who turned out to be our most ardent scatologist, transferred a large pile of scat onto a rock and carried it back to share with the group. John told us the scat was likely coyote, although it must have been a big one at that. 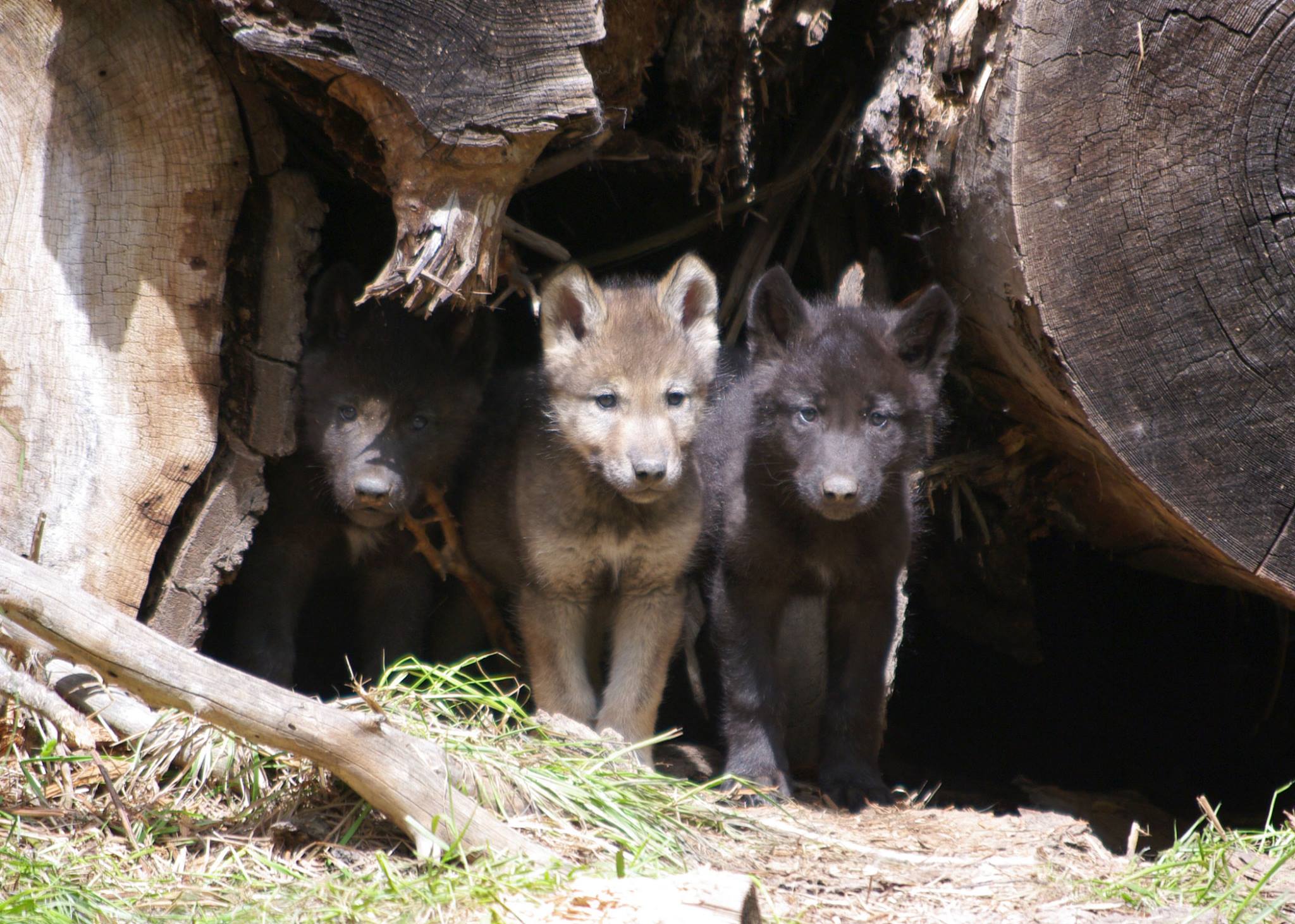 John has seen Journey no less than three times. And it was John who took the picture of the two Rogue pups peeking out of a log. He was only twenty feet away when he snapped the photo, startling the pups back into hiding. John also discussed the challenges the area may face as wolf numbers increase in southern Oregon. In his words, “It’s a very human-managed landscape, not like Yellowstone.” But there have been no livestock losses due to wolves so far and ranchers are doing their part to help prevent problems in the future.

On Saturday, after a pleasant hike on the Pacific Crest Trail, Bridget Callahan, Wilderness Campaign Coordinator, led us to her favorite place in the world, Crater Lake National Park. After gazing at the lake, we skirted past hordes of tourists to a conference room where we met the park’s terrestrial ecologist, Sean Mohren. Sean told us about the history of wolves at Crater Lake, sharing excerpts from park ranger logs as far back as August of 1930, when “…just above Park Headquarters, a large timber wolf walked leisurely along the edge of the meadow carrying a marmot in his mouth.” Wolves, we learned, are not likely to populate Crater Lake National Park due to the elevation and heavy snow fall. Elk leave the park in the winter, meaning wolves would as well. But if climate change decreases the snow pack, enabling more wildlife to live there year round, Sean assured us “the park would truly embrace wolves.”

We were given an education on the multitude of species that call Crater Lake home, or at least pass through it, including the rare Sierra Pacific red fox, the Pacific fisher, black bear, elk, Black-backed woodpeckers and the Mazama newt, a subspecies indigenous only to Crater Lake.  The knowledge we gained in our time with Sean served to give us a deeper appreciation for Oregon Wild’s Crater Lake Wilderness Proposal. Bridget shared details of the plan with us, but in a nutshell, the proposal would protect 500,000 acres inside and outside of the park from threats such as logging and development and at the same time, would create a 90 mile wildlife corridor along the crest of the Cascade Range. The proposal is still in the works. In fact, one from our rendezvous, the new board president of Oregon Wild Vik Anantha, headed into the backcountry after we departed to do research on some of the areas included in the proposal.

Our wolf rendezvous included several dedicated environmental supporters. Some belong to Oregon Wild Ones, a venue spearheaded by Oregon Wild for those who want to take their activism to the next level. These include Stephanie, Brett, and Judith, who plan on attending the October 9, 2015 Oregon Department of Fish and Wildlife Commission meeting in Florence where they will explain to the commission why wolves should remain protected under the state’s Endangered Species Act.

After Crater Lake, we had dinner at Beckie’s Cafe in Union Creek. Beckie, by the way, was a man. When he died, his wife became known as Beckie as well. As you can imagine, I felt very at home there. At a table next to us sat a dozen folks dressed in kilts and black vests. Ominous looking swords hung at their sides. As we wondered if there was a performance of Braveheart going on nearby, one of the men went to his car and returned with his bagpipe and in the small dining room of Beckie’s Cafe we were given a private performance by Roland Kari of the Southern Oregon Bagpipe Band. 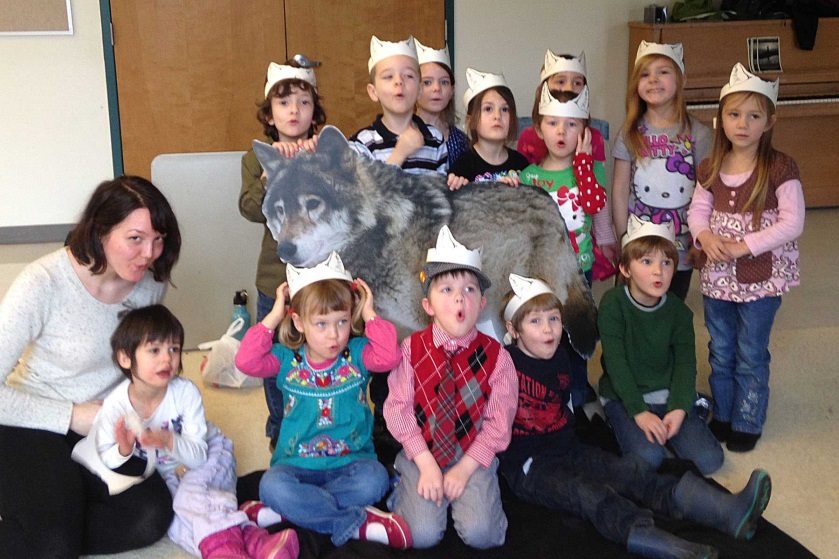 Sunday morning we rose to another delicious breakfast created by Joannie. Besides her attributes as a camp cook, Joannie has created a wolf education program for elementary students called Wolfways. Oregon Wild and Wolf Haven International both sponsor Joannie’s program. So far, over 750 kids have been given the opportunity to see wolves in a new light. Little Red Riding Hood and The Big Bad Wolf are taking a back seat to the scientific evidence that demonstrates the value of wolves in the environment.

Inspiration filled the air throughout the entire Crater Lake Wolf Rendezvous. Karen told me that the event brought her renewed motivation to work on her wolf writing project. I felt the same. We admitted looking forward to a soft bed and warmer nights, but would miss the people and the place. The rush of the Rogue River had brought close the sanctity of the natural world, while our campfire conversations instilled the need to protect this world and the wildlife that inhabits it. The experts we listened to provided facts to validate our arguments for preserving wilderness and wildlife. I left the Union Creek campground inspired by all of this, but especially by the desire of my rendezvous friends to understand opposing viewpoints and to soak up as much knowledge about wolves as possible.