Wildflower of the Week - Fallen Stars 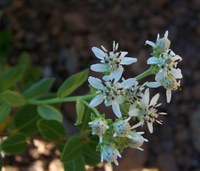 As late summer begins to advance into fall, one of the most commonly seen wildflowers of the season is the late-blooming Aster. Members of the Sunflower Family, Asteraceae, the Greek word “aster” means “star” in reference to its supposedly star-like flowers.

Of the many Aster species we could choose from, (being partial to Oregon) we’ve picked this one as the week’s featured species somewhat arbitrarily, due to its specific epithet being “oregonensis.” The Latin suffix “ensis” means “pertaining to” or “originating in.” This species is found at various scattered, but drier, locations throughout western Oregon.

For those that love late summer and early fall’s wild asters, you may be disappointed to learn that technically North America (including Oregon) no longer has any “true” Asters!

Due to molecular and finer morphological analysis, botanists have now found that the species within genus Aster in North America is completely different from the many similar-looking “true” Aster species found in Eurasia. Perhaps these changes in nomenclature would not be so difficult to accept, were there just one new name for all of the hundreds of (formerly) Aster species found in North America.

But further analysis demonstrates that this part of nature is still even more biologically diverse than once imagined. In North America, the genus has been split into ten new genera and none are any longer in the genus Aster! Seven of these, Canadanthus, Eucephalus, Eurybia, Ionactis, Oreostemma, Sericocarpus and Symphyotrichumare, are the names of the “new” Aster genera that contain species which grow in Oregon. Of the roughly 600 previous Aster species described worldwide, only 180 (all old world species) now remain in the genus Aster.

Due to the sheer complexity of so much diversity, famous 19th century American botanist, Asa Gray, when trying to sort out a multitude of pressed Aster specimens, once exclaimed in total desperation: “Never was so rascally a genus!...(they) may reduce me to blank despair!”  Perhaps Dr. Gray might have despaired a little less had he known to first divide the North American species into ten separate genera?

In general, most of our Aster related species are nectar producing flowers sought out by many species of butterflies and other Lepidoptera.

The new genus name Sericocarpus of the Oregon White-topped Aster is a Greek word meaning “hairy fruit” - in reference to the pappus bristles that surround each individual seed or fruit.  These composite flowers can contain 4 to 7 ray flowers, but most typically bear 5 (white) ray flowers (each 7 mm long) as pictured here. The multiple individual disc flowers, clustered in the centers, bear dark colored anthers.