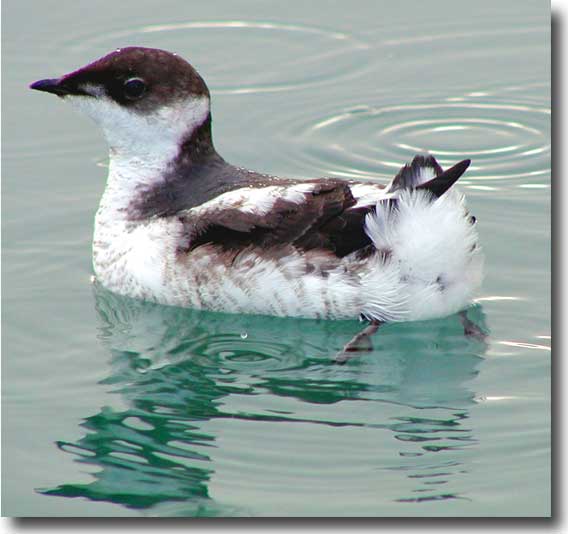 The marbled murrelet is a member of the auk family, which includes birds like auklets, guillemots, and puffins. These sea-birds are small — only about the size of a robin — and get their name from the marbling pattern of black, gray and white that covers their backs during the non-breeding season. When murrelets are breeding, they molt to a plain brown plumage.

For years, the nesting habits of the marbled murrelet were confusing to the scientific community, as they leave their coastal homes and fly more than 30 miles inland in order to roost in the highest reaches of old-growth forests. These birds form lifelong breeding pairs when they're at sea feeding on small, schooling fish, such as herring.

Why the Murrelet Needs Our Help

Secure nesting habitat is imperative for the survival of these threatened birds. Years of old-growth logging in the Pacific Northwest has destroyed many of the birds' important nesting trees, and local marbled murrelet populations have struggled as a result. Decline in numbers led to their federal listing as a threatened species in 1992.

With already high chick mortality, increased predation of chicks by crows, ravens and jays — species which become more abundant as forests grow more and more fragmented due to logging — has been a significant contribution to an annual population decline of four to seven percent over the last few decades. However, Oregon Wild and other groups are working hard to ensure we preserve remaining old growth forests for the marbled murrelet and other species that depend on mature forests for habitat.

In 2017, conservation organizations filed a petition with the Oregon Department of Fish and Wildlife Commission, asking them to uplist the species from 'threatened' to 'endangered' under the state Endangered Species Act. After reviewing their own agency's biological status review, Fish and Wildlife Commissioners decided that the imperiled nesting seabird warranted more protections and granted it 'endangered' status. However only three months later    --after pressure from the timber industry and local county officials-- the Commission ultimately decided to reverse their previous decision and keep the marbled murrelet listed as 'threatened'.