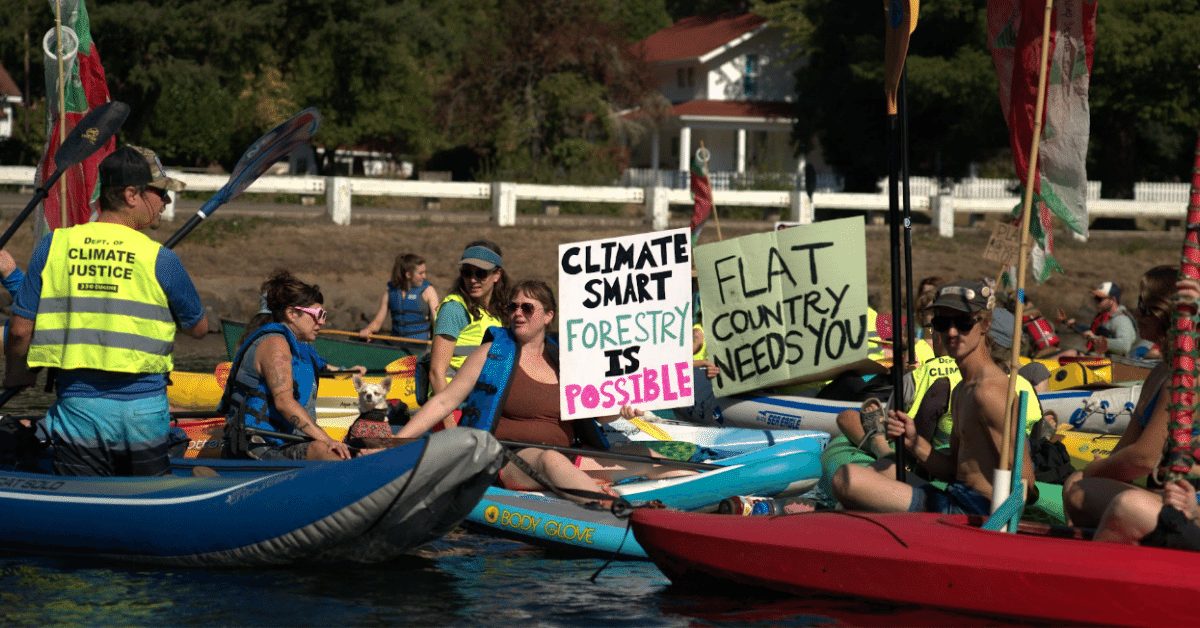 Leaburg, OREGON – Today, a “kayaktivist” flotilla of over 100 concerned community members rallied on the McKenzie River to protest an old-growth logging sale in the Willamette National Forest. The Flat Country project, proposed by the U.S. Forest Service, targets over 2,000 acres of old-growth and mature forests for logging across the headwaters of the McKenzie River. The agency could auction the old growth to be cut at any moment.   Attendees held up signs from boats and kayaks, and unfurled a large banner declaring “Forest Defense is Watershed Defense”, to draw attention to the logging sale’s impact on downstream drinking water.

At the event, protestors called on the Willamette National Forest and the Biden administration to drop the Flat Country old-growth logging sale in light of the significant impacts it would have on climate, wildlife habitat, and community safety. The project also encompasses the headwaters of the McKenzie River, the source of drinking water for hundreds of thousands of people in the area. The sale is also opposed by Congressman Peter DeFazio and leading forest ecologists Jerry Franklin and Norm Johnson.

“We haven’t seen a logging project like this in years, and there’s a good reason why,” said Cascadia Wildlands organizer Madeline Cowen. “When you log places like Flat Country, you’re making the area more susceptible to fire and drought. You’re impacting the entire downstream community that relies on this forest.”

Eric Schiff, local resident on the McKenzie River said: “In 2020, we lost our home to the Holiday Farm wildfire. Now just a few years later with the Flat Country timber sale, it is unfathomable that the Forest Service is still proposing old-growth clearcut logging in the McKenzie River watershed. Our community relies on the McKenzie River for our drinking water, recreation, fisheries and our livelihood. It is critical that policymakers do everything that they can to protect this invaluable resource and iconic river.”

Earlier this year, President Joe Biden signed Executive Order 14072 on Strengthening the Nation’s Forests, Communities, and Local Economies, which directs his administration to create stronger protections for public forests in an effort to mitigate the climate crisis. Despite this Executive Order, Willamette National Forest is moving forward with the timber sale which threatens thousands of acres of old-growth and mature forest in the McKenzie Watershed, the very types of forests the Executive Order was meant to safeguard.

“The Flat Country sale aims to cut down some of Oregon’s last remaining,  biggest and oldest trees— precisely the ones we need to keep growing and storing carbon,” said Oregon Wild organizer Victoria Wingell. “Forests like these are already the best wildlife habitat, the best climate mitigation, and the most resilient against wildfire. We need to act now before we lose them for a lifetime.”

The Flat Country logging sale has been identified by the national Climate Forests Campaign as one of the most egregious examples of mature and old-growth federal logging projects set to take place despite President Biden’s Earth Day executive order to protect them.

The McKenzie River Flotilla is the first in a series of rallies organized by the Climate Forests Campaign to take place across the country in the lead-up to COP 27. This coalition, made up of over 100 groups including Sierra Club, Natural Resources Defense Council, EarthJustice, and Center for Biological Diversity, are calling on the Biden administration to establish a rule that protects mature and old-growth forests on federal lands from logging as part of the United States' international commitments to address impacts of climate change.

The recruiting, training, and capacity building for this event is in part supported by the Climate Emergency Fund, which strategically supports ultra-ambitious organizations demanding solutions to the climate crisis at emergency speed.