Mushroom of the Week - an artist's palette 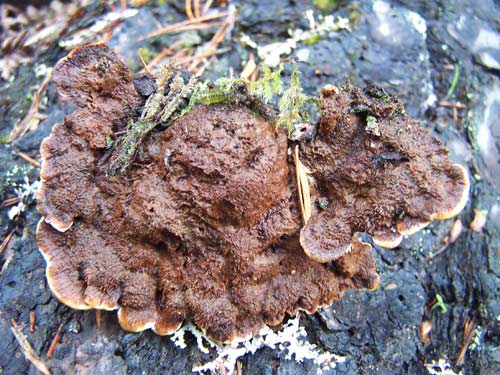 Superficially, the Artist’s Conk looks much like last week’s featured bracket fungus species: the Red-belted Conk, Fomitopsis pinicola.  The Artist’s Conk is perhaps only second in abundance to the Red-belt Conk, and has a similar grey, brown to black upper cap surface.

It is reported that a mature Gandoderma applanatum, up to about 30 inches across, can produce 30 billion spores a day continually for 6 months of the year.  This pencils out to a seasonal total of 5 trillion spores!

What makes the Artist Conk the most unique is that the slightest touch of its usually white under surface instantly produces a dark brown stain when it is even just slightly scratched.   Thus, as no paint is required, clever artists have collected this woody shelf mushroom to use as a natural pallet to draw pictures on its underside of everything from images of other mushrooms to wildlife images such as of wolves.

The more difficult trick can be to first dislodge a larger shelf fungus specimen from the conifer or hardwood tree to which it is attached, without accidentally putting permanent finger smudges all over your fungal canvas—and before you can get one of the finer specimens home.  Still before you pick it, particularly if it’s along some well-worn trail, you are well advised to take a quick peek at the under surface first, before you attempt to rip it off.   This is because if you are seeking a perfect, unblemished specimen, you might find that it has already been “fingered”, or else discover some previous, passerby prankster has already scribbled their own message in below!

The Artist’s Conk is found in all 50 states and throughout much of North America.  Also like its cousin the Red-belted Conk, the Artist's Conk generally only breaks down the already dead wood of the tree trunk on which it grows, but also like the Red-belted species can sometimes become parasitic on both the sapwood and heartwood of its host tree--producing a white to straw-colored rot.

The specimen pictured here (is the top and bottom) of a younger, not very large specimen.  As seen here, the normally white under surface may also turn to a light brown in age.   But its ability to instantly stain dark where touched, or when more delicately scratched with a small stick, is probably the best clue that you have found this species.  Also, the species epithet, applanatum means "flattened" and refers to the flat, shelf-like appearance (applanate) of the fungus, that indeed tends to be flatter than the thicker bodied Red-belted Conk.

The Artist’s Conk’s scientific Genus name Gandoderma means “shiny skin” and, and such, does not well describe this particular species.  However, other species of Gandoderma with their typical shiny skins are often called “Varnished Conks”.  This includes the somewhat famous Gandoderma lucidum, or Chinese Reishi or Lingzhi Mushroom, that is believed to strengthen the immune system.  The consumption of which, thus is claimed by many to prevent cancer and to assure good health.