The Umpqua National Forest is located on the western slopes of the Cascade Mountains in southwest Oregon. The word Umpqua loosely translates to either “Thundering waters” or "across the waters," but another translation for this surviving word of the Umpqua language is "satisfied" referring to a full stomach.

Native people of the Umpqua, Southern Molalla, Yoncalla, and Cow Creek Band of Umpqua Tribe of Indians lived in the forest before Mt. Mazama erupted to form Crater Lake 7,000 years ago. Native Americans were moved to reservations in 1856 as European settlers continued to encroach, causing the tribes to become further fragmented. 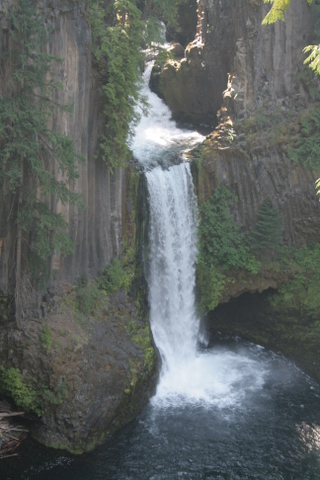 The Umpqua National Forest was set aside March 2, 1907 as a forest reserve in the Coast Range in Douglas County. Just two days later, Congress renamed all of the forest reserves as National Forests. The Forest Service broke up the Cascade Forest Reserve on July 1, 1908. It became what is now the Mt. Hood, Willamette, Umpqua, and Rogue River National Forests. The road connecting Roseburg and Diamond Lake (Hwy. 138) was completed in 1940, which increased logging in the upper reaches of the Forest.

The Umpqua National Forest is at the juncture of several distinct geologic provinces, providing a wide spectrum of habitat for a diversity of plants and wildlife. The Forest is home to 18 fish species, including winter steelhead, Chinook and Coho salmon, and sea-run cutthroat trout. The Forest contains 66 mammal species, 236 bird species, and 27 reptile and amphibian species. 359 miles of anadromous fish bearing streams exist with thousands more miles of streams covering the Forest.

The Umpqua National Forest has three different Wilderness areas. Boulder Creek is a tributary of the North Umpqua River, and the namesake for the Boulder Creek Wilderness. The 26,593 acre Mount Thielsen Wilderness was carved by glaciers and contains 9,182-foot tall Mount Thielsen. The pointy jagged summit is referred to as the "Lightning Rod of the Cascades” due to frequent lighting strikes. These events have caused Fulgurites, which are a glassy rock to form on the top 10 feet of the peak. The 26,350 acre Rogue Umpqua Divide Wilderness is located ten miles west of Crater Lake National Park, and offers 100 miles of trails, providing loop opportunities and ridge top vistas. The Boulder Creek Wilderness, 19,100 acres, is entirely within the Forest boundaries. Oregon Wild has proposed the Crater Lake Wilderness, which would partly be in the forest.

The Umpqua National Forest currently has 54 developed campgrounds with nearly 800 campsites, 5 historic cabins and lookouts available for rent, 350 miles of trail maintained for year-round use, 1,150 miles of roads maintained for car travel, and 4 staffed lookouts. The Rogue-Umpqua National Scenic Byway runs up the river and provides access to recreation activities and gorgeous scenery. Diamond Lake sits at the base of Mt. Bailey and provides camping and fishing opportunities as well as ice fishing in the winter. The Forest has many large and beautiful waterfalls including the 272-foot Watson Falls and 113-foot Toketee Falls on the North Umpqua Highway. The North Umpqua Wild and Scenic River runs through the forest and provides abundant opportunities to fish and boat in this world-class river. 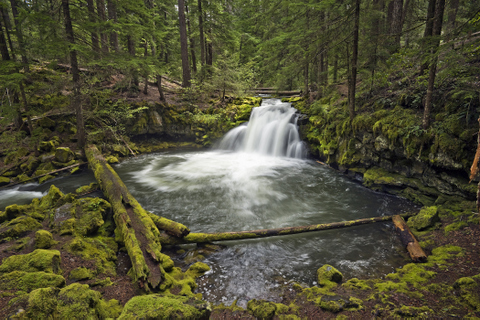