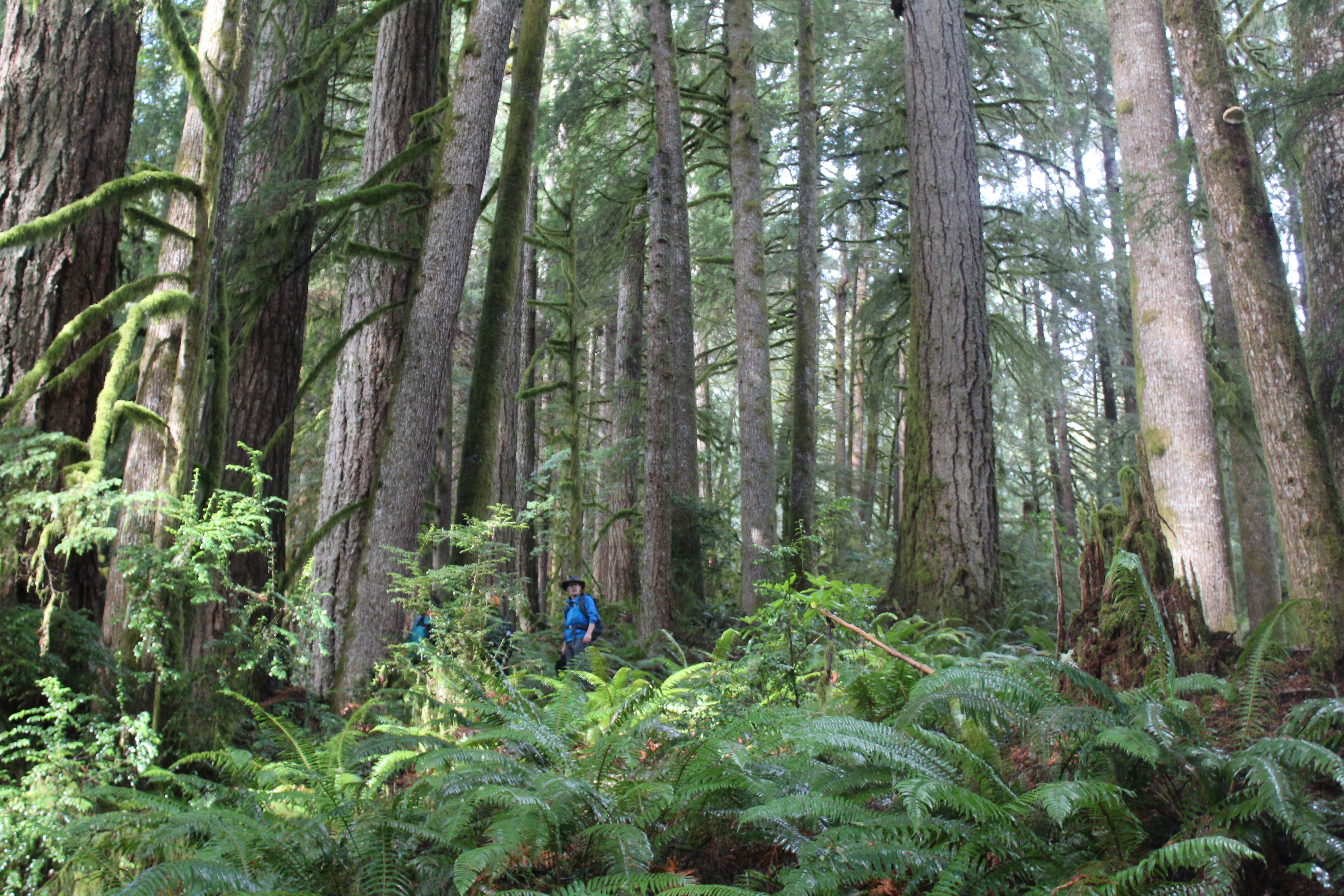 Back in 2007, Oregon Wild staffer Doug Heiken and I spent some time poking around the edges of a big roadless area in the Coast Range, identified on Oregon Wild maps, which looked to have some old forests that could be at risk of logging under the new BLM management plan being developed at the time (known as WOPR). We found some overgrown roads and some giant trees along them. We didn’t venture in far from the roads, as the terrain was steep, the vegetation thick, and there were no trails to follow. We started talking with other forest advocates about this area, and learned that this area nestled in the rugged landscape between the Umpqua River and Smith River, east of the town of Reedsport, had actually been proposed for Wilderness protection back in the 1980s. In a book produced by the Siuslaw Task Force in 1980, the case for protecting the Wassen Creek Wilderness laid out.

One key excerpt from the 1980 booklet resonates well with any who have ventured into this thick coastal rainforest: “Rated on a scale of one to ten (for both beauty and hiking difficulty) Wassen Creek Wilderness scores 20+. …The slopes are extremely steep and the understory vegetation…is often very dense, making cross-country travel a challenge.”

Despite the known difficulty, a few intrepid souls started exploring the area in their free time, pioneering routes that Oregon Wild and others have since used to guide people into this wild, rugged place as we launched a new campaign for the Devil’s Staircase Wilderness (a more exciting name than Wassen Creek, and based on the notoriously hard to find waterfall in the heart of the area). Our campaign sparked interest with Congressman DeFazio, who braved the elements and brush to reach the Devil’s Staircase waterfall. Later Senator Merkley did the same. Rep. DeFazio first introduced legislation to protect the area in 2009, and has consistently pursued variations of this bill in each following Congress. Nearly always stymied by the political climate or moves, Devil’s advocates remained hopeful that someday we’d see the protections this place deserved.

Meanwhile, a campaign to protect a large chunk of the wildlands surrounding the Wild & Scenic Rogue River, where it runs through lands managed by the Bureau of Land Management, also gained momentum. With timber sales being proposed in old-growth forests above important tributary streams, and the BLM’s new management plans threatening far worse, advocates drew attention to the need to finish protecting one of the most iconic landscapes in the country. The nearly 60,000 acre Wild Rogue Wilderness proposal and associated Wild & Scenic River designations for many of the Rogue’s tributaries included old-growth forests and key salmon and steelhead spawning tributaries that were left out of 1978 Rogue River protection legislation due to opposition from logging companies. It’s been under constant threat from logging and mining development ever since.

Our legislators have recognized the importance of this area too, introducing protections for the Wild Rogue and its tributaries year after year since 2008, packaging it at various times with Devil’s Staircase and other protections as “Oregon’s Treasures” and “Oregon Wildlands” over in different Congressional sessions. But the protections the Wild Rogue landscape deserves remained elusive.

In early 2019, after years of persistence from Oregon Wild supporters and our elected representatives, we finally got our chance to celebrate. A sweeping public lands package passed through Congress, and included the Devil’s Staircase Wilderness, as well as Wild and Scenic designations for beloved Oregon rivers like the Molalla, Elk, and Chetco. And while many of its tributaries were added to the Wild & Scenic River inventory in the bill, the Wild Rogue Wilderness additions were unfortunately left on the cutting room floor – the victim of political deal-making that favored extractive industries over public values.

The politics of wilderness: The ins (and outs) of passing a bill

While the efforts of grassroots advocates who love Oregon’s wildlands and rivers is vitally important for enacting protections for special places, in the end, whether a place is protected or not often comes down to the support of our elected officials and to politics.

Lucky for Oregon’s wild places, we have some excellent champions in our Congressional delegation. The steadfast support of Senator Ron Wyden and Representative Peter Defazio, reintroducing these protections year after year, has been vital in keeping our wilderness dreams alive.  Senator Merkley, and Representatives Schrader, Blumenauer, and Bonamici have also played important roles in advancing these bills. Unfortunately, having this broad support from elected officials representing areas slated for protections isn’t always enough.

Those who would like to log Oregon’s remaining old-growth forests, and who see resource extraction as the highest and best use of our pristine watersheds have been relentless in trying to block the protections our elected leaders support. Over the past ten years, broad Congressional efforts to limit public lands protections have stymied passage of the Devil’s Staircase Wilderness, Wild Rogue, and river protection efforts.

The latest example: Last fall, after Senator Ron Wyden re-introduced the Oregon Wildlands Act with the Wild Rogue Wilderness in it, a major logging industry lobby launched a campaign to block protection for the area. They reneged on a previous agreement to support Wilderness for the area, and worked with Rep. Greg Walden to strip Rogue protections from a final public lands deal scheduled for a vote early in the new year. (The Wild Rogue isn’t even in Walden’s district!) Designations for National Recreation Areas on the Wild Rogue and Molalla Rivers were also stripped out.

Even getting the Oregon Wildlands Act, stripped down as it was, that far in the lame duck Congress had seemed like a long shot, but Senator Wyden made sure that when Congress returned in January 2019 the deal brokered by the Senate moved forward. With a series of quick votes, Oregon stood poised to gain its first new Wilderness in 10 years, the addition of 256 miles of Wild & Scenic Rivers, permanent protection for the Chetco River from mining, and the Frank and Jeanie Moore Steelhead Sanctuary on the North Umpqua River. Despite his attempts to sabotage the bill and disappointing opposition to protecting Oregon’s beloved Wild Rogue, even Congressman Greg Walden voted for the bill.
Officially called the John D. Dingell, Jr. Conservation, Management, and Recreation Act, the public lands bill became law on March 21, 2019, with the unlikely stroke of President Trump’s pen.

Victories like this clearly don’t come easily these days, which is why it’s so important to take a moment to celebrate the protections gained this year: Oregon gained its first new Wilderness in ten years, a huge addition to our Wild & Scenic River inventory, permanent protection for the Chetco River, and the Frank and Jeanne Moore Wild Steelhead Special Management Area on the North Umpqua River. Woo hoo!

The new Devil’s Staircase Wilderness is a vitally important area of contiguous, unlogged forest in the Coast Range. If you have ever driven through Oregon’s Coast Range, you know there isn’t a lot of intact forest left. Much of this landscape’s ancient cathedral forests were logged long ago and replaced with private industrial clearcutting operations. Taken together with the unlogged portion of the Elliott State Forest, just to the south of the new Wilderness, this area provides a vitally important large block of intact forested ecosystem, providing high-quality fish and wildlife habitat, and storing vast amounts of carbon, helping us combat climate change.

Add to that an additional 256 miles of rivers and streams designated as Wild and Scenic Rivers, bringing Oregon’s total to 2,424. This designation protects the forests surrounding these free-flowing streams, protects them from future dams and mining, and helps safeguard clean drinking water, our world-class recreation opportunities, and the critical salmon habitat many communities rely on. From the Nestucca River in the northern Coast Range to the tributary streams of the lower Rogue River, to the pristine headwaters of the Elk River on the south Coast – we will see the benefits of these river protections for generations to come.

River advocates can also celebrate a long-sought correction to a loophole for mining in the designated Wild & Scenic Chetco River on the south Coast, finally protecting one of Oregon’s most beautiful rivers from the potential of damaging mining practices.

While it was frustrating to see the Wild Rogue Wilderness additions and the National Recreation Area designations for the Rogue and Molalla Rivers left out of the bill that passed, neither we nor our Congressional champions are giving up on making sure these other worthy places are protected. In May, Senators Wyden and Merkley introduced legislation to capture the pieces left out of this last round of protections – the Oregon Recreation Enhancement Act (OREA).

While it’s been great to celebrate the successful efforts for the special places included in the Oregon Wildlands Act, millions of acres of public lands across our state remain unprotected. With just 4% of our state protected as Wilderness, Oregon is still far behind our neighboring states. The OREA is a great next step, but to really make up this deficit and do our spectacular wildlands justice, we need to go further. We need our elected leaders to step up and do more.

Fortunately, they seem to be listening. This spring, Senator Wyden and Rep. Blumenauer held a public forum and have been soliciting feedback from the public about what wildlands should be considered for protections next. They’ve been hearing from wildlands advocates about special places as yet unprotected – from the Owyhee canyonlands, to the Ochoco Mountains and the wildlands surrounding Crater Lake National Park. With the ongoing support and pressure from people like you, we hope to be celebrating the next round of wildland protections well before another decade goes by.