Wildflower of the Week - a plant with no name 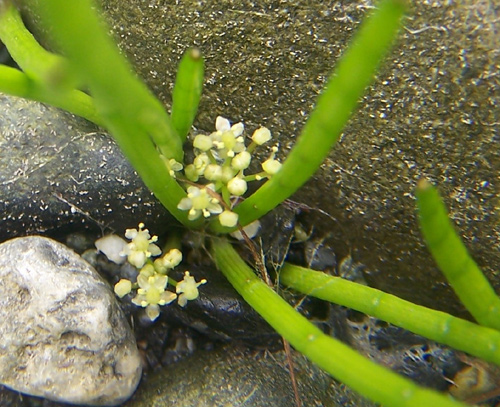 Lilaeopsis occidentalis, otherwise known as Western Lilaeopsis, has no special common name - as the common observer may never see its delicately arranged, tiny flowers, or give it much notice at all. Thus, while little noticed or appreciated, I considered it to be a special nymph of streams and other wetland places, where I always greet its unexpected discovery with special warmth and delight!

Western Lilaeopsis, (pronounced Lil-A-opsis) is not one of those native plants, or flowers, you are likely to trip over. In fact the casual observer might (incorrectly) describe it as bright green grass. Actually, it is in the carrot or parsley family, Apiaceae. Characteristic of plants in this family, its few very small flowers are arranged in tiny “umbels” where the stalks that support each individual flower all radiate out from one central point like the rips of an umbrella.

Lilaeopsis 1Lilaeopsis is most often found along the edge of coastal wetland and river banks where the water level fluctuates, but usually doesn’t ever dry out completely. Often it likes just slightly brackish conditions, where it is covered up by freshwater at high tide, but then exposed on sand or gravel bars during low tides. Therefore, be on the lookout for it if you explore the upper end of coastal estuaries in a canoe or kayak. In Oregon it also extends out east at scattered locations along the Columbia River as far inland as east of Boardman, Oregon in Morrow County.

Finding its tiny flowers requires careful observation. To first spot the plant, a tell-tale characteristic is its flattened bright green leaves that are slightly partitioned - with the regularly spaced partitions perpendicular to the length of the narrow, flattened leaf blades. While it sometimes blooms in late September, you are more likely to see its tiny rounded fruits that have now replaced its summer blooming flowers this time of year.

The name “Lilaeopsis” has nothing to do with lilies. Technically Lilaeopsis means that it looks like “Lilaea.” What then is Lilaea? While trying not to get too far off the topic of Lilaeopsis, the genus Lilaea is another less common, but similar looking wetland plant in the Arrow-Grass Family, whose scientific name has now been changed from Lilaea to Triglochin, as in Triglochinscilloides, and is better known as Flowering Quillwort or Awl-leaf Lilaea.

Actually, the name originates from Greek mythology, where Lilaea was a Naiad of a spring of the same name and the daughter of the river god Cephissus, but enough on that! If I haven’t lost you already, then I’m sure you will get a thrill someday at discovering Lilaeopsis!