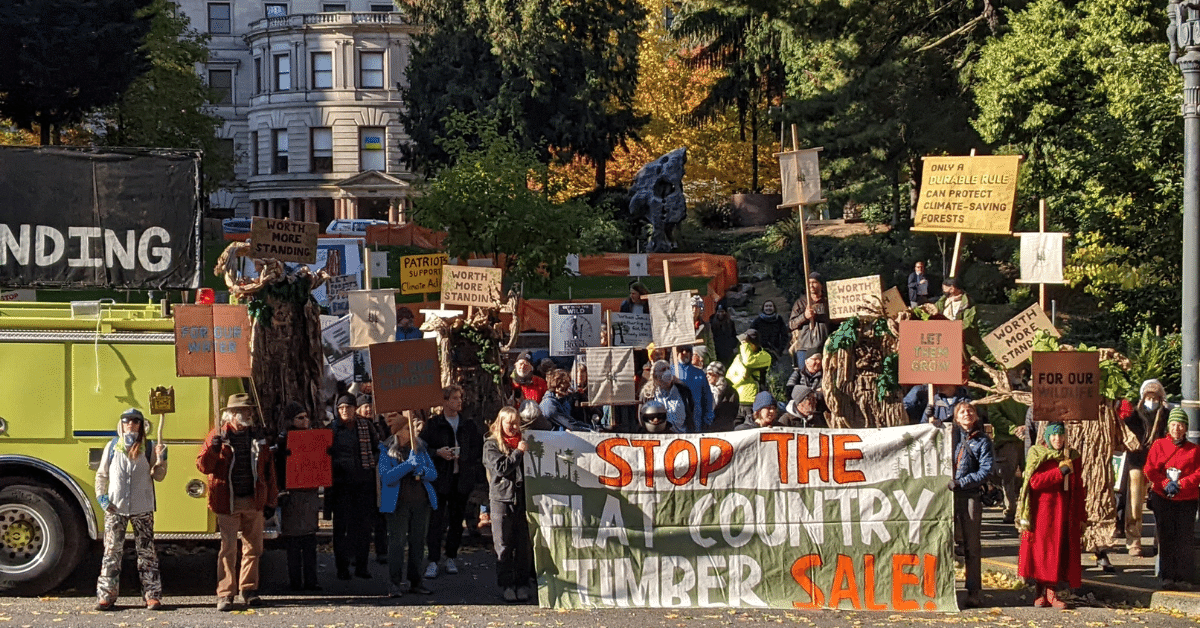 Portland, OREGON – Today, forest and climate activists gathered at Terry Schrunk Plaza across from the Forest Service Region 6 offices in support of stronger protections for mature and old-growth forests. The rally was one of several across the country in response to President Biden’s Earth Day executive order calling on federal agencies to protect public land forests as a natural solution to capturing and storing the carbon pollution that is driving climate change.

INTERVIEWS, PHOTOS & VIDEO FOR MEDIA USE

“Despite President Biden’s executive order to protect mature and old-growth forests, federal agencies like the US Forest Service are cutting them at alarming rates,” said Victoria Wingell, Oregon Wild’s Forests and Climate Campaigner. “We need lasting, durable protections that will keep our most important trees and forests safe and fighting climate change.”

Mark Gamba, mayor of Milwaukie and Representative-elect to the Oregon State House, also spoke at the event: “Given that we have logged all but 3% of old growth on this continent, and given that old-growth sequesters and draws down far more carbon than young trees, it is absolutely critical that we protect the old growth that remains and also work to expand it by conserving mature trees.”

In the leadup to the rally, activists projected images of endangered wildlife threatened by mature and old-growth logging sales in Oregon across the World Trade Center building just blocks away from the Forest Service Region 6 offices. Spotted owls and Coho salmon have all had their habitats degraded by federal and private logging in Oregon and across the Pacific Northwest. The projections also featured a message to President Biden: these forests are worth more standing.

"After spending twenty-five years advocating for ecological management of National Forests, it has become clear to me that we can't keep fighting timber sale by timber sale,” said Brenna Bell, Forest Climate Manager for 350 PDX. “So long as federal lands are expected to ‘get out the cut’, saving a forest in one place just leads to losing it in another. Now, with a changing climate and changing culture, we need national, comprehensive protection of federal mature and old-growth forests once and for all."

The rally coincides with the release of a new report from the national Climate Forests Coalition identifying over 300,000 acres of logging projects across the country threatening mature and old-growth forests. Logging sales in Oregon highlighted in this report are the Ragged Ruby project in the Malheur National Forest and two BLM projects: Evans Creek and 42 Divide. A previous “Worth More Standing” report included the Flat Country logging sale in the Willamette National Forest, and the Poor Windy and IVM logging projects on Oregon BLM lands.

“If the Biden administration is serious about fighting the climate crisis, forests need to be permanently protected immediately,” said Madeline Cowen, Grassroots Organizer with Cascadia Wildlands. “Threatened ecosystems like those in the Forest Service’s Flat Country project and in the Bureau of Land Management’s 42 Divide project are actively storing vast amounts of carbon, providing precious habitat for imperiled species, and ensuring communities have clean drinking water and recreational opportunities. Cutting them down spells game over. Forests are some of the best, and last, defenses we have.”

Altogether, the Climate Forest Coalition has identified 22 projects totaling nearly 370,000 acres of mature and old-growth forests and trees that the Biden administration has on the chopping block.

A federal comment process generated over 130,000 comments from around the country for a strong rule from the Biden administration that protects these “climate forests” from corporate logging.