A Tale of Two Ancient Forests 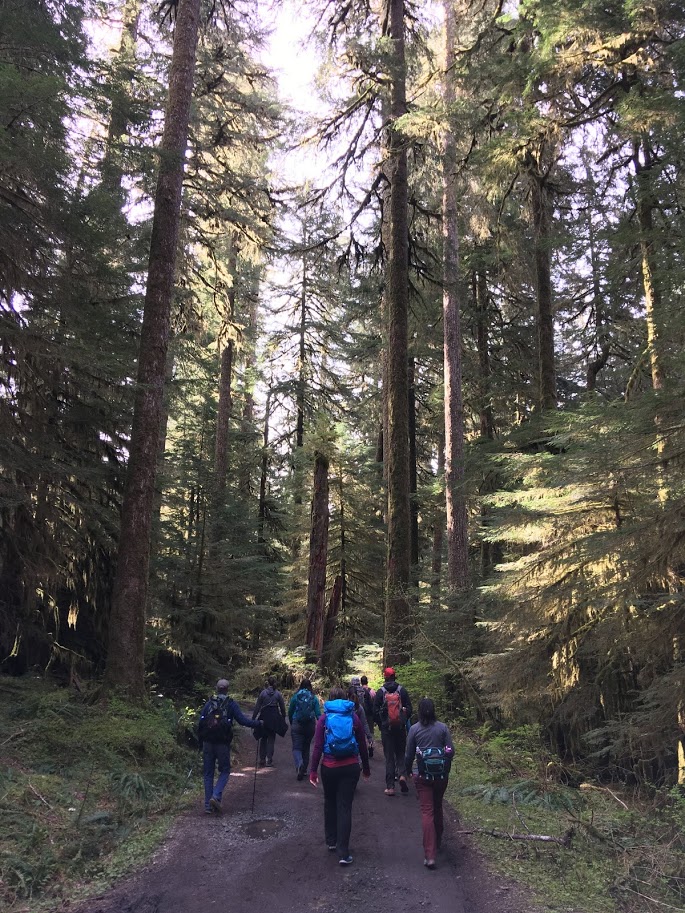 An Experience of a Lifetime

I’ve spent a lot of time in ancient forests over the past year as I work on the new guide to Oregon’s Ancient Forests. Like, a lot, a lot. The forest around Opal Creek is, hands down (and I know I'm not alone in this), one of my favorites.

In the forthcoming book, I tell the story of an experience I had deep in the Opal Creek Wilderness a dozen years ago. No spoilers here, but it involved learning about the chainsaws and bulldozers that were once reving up to destroy this  ancient forest and watershed. Thanks to the persistant work of conservationists and forest advocates, Opal Creek’s pristine wilderness was saved from the fate of so much of the surrounding national forests, and designated as the Opal Creek Wilderness and Scenic Recreation Area in 1996.

I hadn’t been back to Opal Creek since, and let’s just say mistakes were made. Luckily, I remedied the situation the first weekend of May when I joined my colleague Marielle, a group of Oregon Wild supporters, and the folks from Expedition Old Growth for a truly uplifting experience. After hiking in to Jawbone Flats through the stunningly beautiful forest, we focused on our main mission: the experience of being in the top of an old-growth tree. With the expert and enthusiastic assistance (ok, really, they did all the work) of the Expedition Old Growth crew, every one of our group was able to ascend the selected tree, a short way from the main road through Jawbone Flats, and spend about 10 minutes taking in the view - and completely 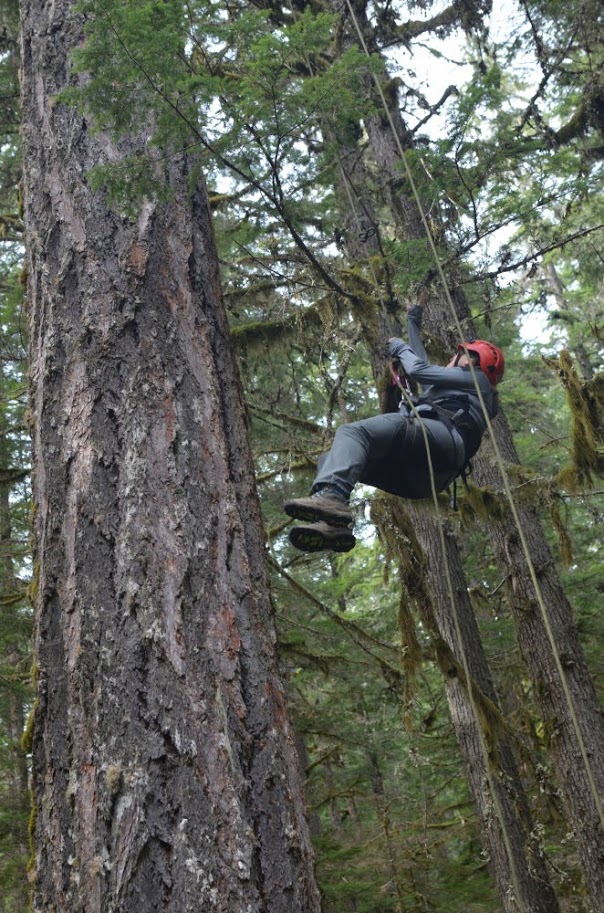 different perspective  - from 150 feet up. As I waited my turn, the smiles on the faces of each descending forest lover told me I was going to love it.

A hundred and fifty feet doesn’t seem that far on the ground - it’s only half of a 100 meter dash. But, going up?...It seems a lot farther. The “elevator ride” to the top went too fast for me (even though it was safe and slow). I wanted to take in the changes in my view from every angle as I went up!  But I had plenty of time to take it all in once I was clipped in and had my feet on sturdy branches. From the top of this two hundred year old Douglas-fir tree, at the edge of the wilderness, I was eye-to-eye with the lichens, mosses, and tiny creatures that cling to life on the tree’s surface. 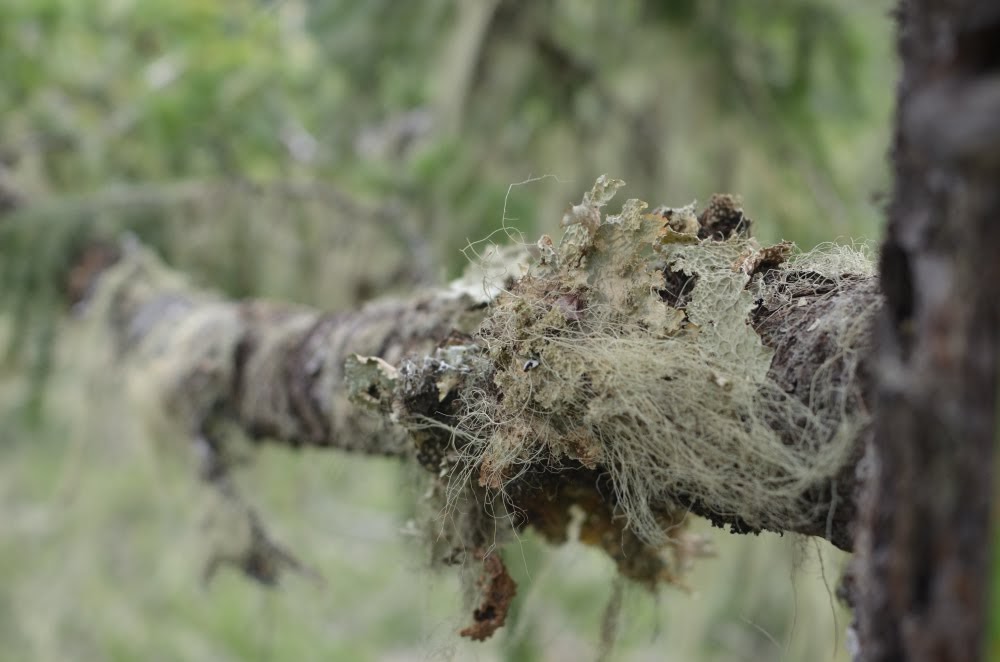 Looking down at the forest, the snags came sharply into focus, the different hue of green of the cedars  stood out, and the gentle breeze stirred the hanging lichens and tiny hemlock cones in the tree tops around me. This was all wonderful - so many things to notice in a new and more intimate way. But the bigger picture also loomed. To the south of our supportive trunk lay the Opal Creek valley - not a clearcut in sight. Heaven. 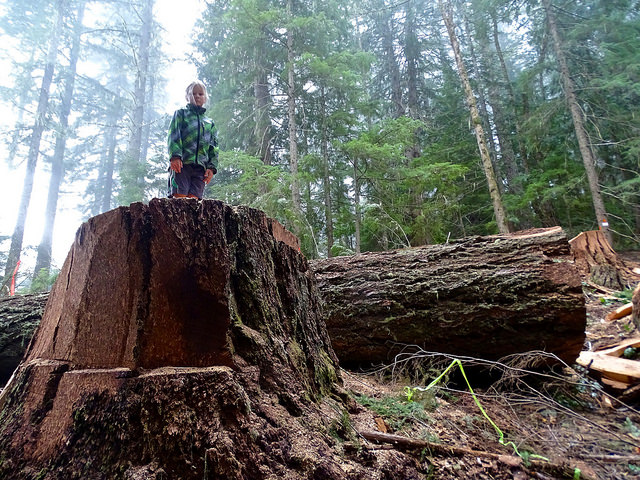 But roughly 200 miles to the south, a much different old growth story was unfolding that weekend, one many might have trouble believing still happens. At the same time our group was experiencing the world from the canopy of one of Oregon’s most pristine forests, another group of forest lovers were witnessing a different ancient canopy senselessly crashing to the forest floor. (You can follow their story on facebook here.)

Despite claims and misconceptions that old growth logging on public lands in Oregon is a thing of the past (or, more extreme, that environmental protections have “locked loggers out”), the practice is still alive and well. Protections for what little remains of the ancient forests that once blanketed western Oregon have indeed been put in place for much of our public lands, but logging companies have several ways of bending the law, or finding loopholes, that allow them to continue to log centuries-old forests.

In this case, Lone Rock Timber (who you might remember from their bid to privatize the Elliott State Forest) found a doozie of a loophole to log 400 year old trees in the foothills above the Wild & Scenic North Umpqua River east of Roseburg. They claimed that in order to finish clearcutting some of their private lands, they would need to bulldoze a new road right smack through the middle of an ancient forest managed by the Bureau of Land Management. Due to policies on the BLM’s books around granting “right of ways”, and a lack of will to stand up to the egregious request, the road building request proceeded without any public process or environmental review.

The saddest part of the story: Lone Rock already had a road to their lands, built 40 years earlier!

When Lone Rock previously clearcut their land, they built and used a different road. This time around, Lone Rock claimed their mechanical harvesters, which have replaced human loggers, could not access the last few trees on their property. Their plan for a new road and turn around (500 feet from their old road and turn around) would just have to mean they would have to cut down the BLM’s old growth trees - and keep the proceeds from selling them. The company even went so far as to station a guard and threaten the arrest of anyone who tried to access the public lands they planned on logging. 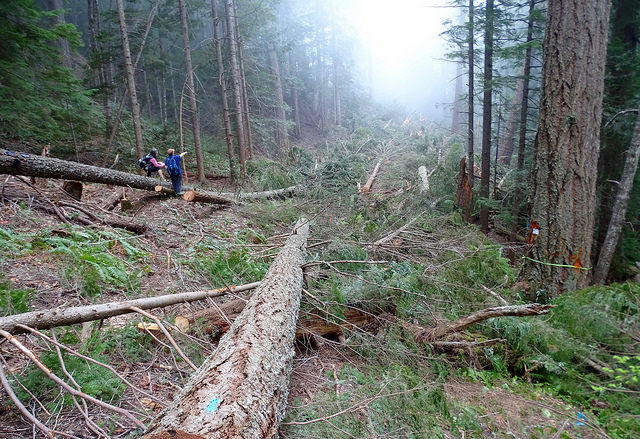 Despite the best efforts of conservationists who found out about the shady dealing, the BLM allowed the destruction of this rare ancient forest - elevating the interests of the private logging company above that of the general public.

The juxtaposition of these stories is mind-boggling, and makes the experience from the top of an old-growth tree all the more breathtaking. But just as Opal Creek’s ancient forests were threatened by the greed of those wielding bulldozers and chainsaws before it was protected, so are many others today. Climbing into that ancient canopy was the experience of a lifetime, and one that can be experienced by the next generation of Oregonians as well - only if we continue to fight to save and protect these forests.