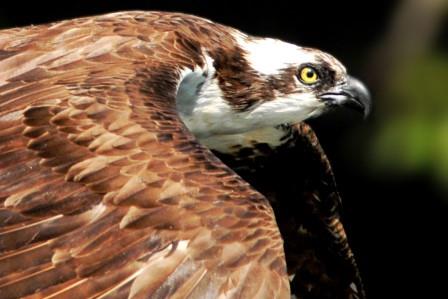 Skilled artists in the air, ospreys can be seen diving into water bodies from heights of 30 to 100 feet to snag fish, which comprise 99% of these raptors' diets. Osprey make their homes along lakes, reservoirs, large rivers, and estuaries. They rely on tall snags, dead standing trees, to make their nests.

Osprey are often mistaken for eagles, but osprey possess distinct markings. Most notably, osprey have a white underbelly, visible while they soar through the air. Osprey also have a distinguishing dark stripe that runs along their eye down the side of their white face.

Ospreys are migratory birds. They come to Oregon in April and remain until September when they travel south for the winter, commonly to Mexico. While in Oregon, osprey mate, nest, and raise their young until their first migratory flight. Ospreys mate for life and return to the same nest each year. Female osprey only lay once a year, with one to four eggs in their clutch.

Ospreys became a species of concern for conservationists across the nation and in Oregon during the 1970s. Widespread applications of the pesticide DDT over the 1950s and 1960s, led to its pervasive presence in the environment. Ospreys, at the top of the aquatic food chain, accumulated large amounts of DDE, the chemical that DDT breaks down to in the environment, in their bodies. This led to eggshell thinning and breaking, which caused a dramatic decline in osprey populations by the 1970s. DDT was banned in 1972 and osprey populations have steadily rebounded in Oregon and elsewhere in the nation, albeit in some areas populations remain scarce.

While populations have regained their strength in Oregon, ospreys remain at the top of the aquatic food chain, and therefore are particularly vulnerable to chemical pollutants. Pollutants in water bodies enter into fish through the food they eat and the passage of water through their gills. These same contaminants are then passed from smaller fish to larger fish, and eventually to ospreys. This process results in biomagnification of the pollutants, or an increased concentration of the pollutants from one level of the food chain to the next. Consequently, osprey populations remain particularly susceptible to toxins leached into the environment from human activities. Protecting our rivers, lakes, and streams is a critical component in ensuring the survival of osprey.

Physical pollution also poses a threat to opsrey. After creating a Osprey on Neststick foundation for their nests, osprey search for moss, grass, and lichen to form a soft lining. In human impacted and polluted environments, osprey will also collect discarded baling twine and fishing line for their nests. Unfortunately, ospreys' talons are easily snagged and caught in the twine, which can lead to the death of adult osprey, as well as their chicks. In some areas, baling twine is estimated to cause the death of 10% of osprey chicks.

Ospreys, like most species, are also threatened by human modification to and loss of their habitat. A primary concern for ospreys' survival is the loss of snags near their fishing grounds due to logging, development, and dead tree removal. While ospreys have become adept at utilizing power poles and channel markers as nesting sites, it is not without some complication for both humans and ospreys. Osprey nests can interfere with the intended use of the structures, and for the osprey, nesting on power poles puts them at high risk of electrocution. Fortunately, artificial nesting platforms can be built on both of these structures to accommodate osprey; these platforms have also been built to replace snags in areas where conservationists are trying to reestablish osprey populations. While both of these strategies are mitigating impacted habitat, a more comprehensive strategy to aid osprey is continuing to increase protection of forested riparian and aquatic habitat.