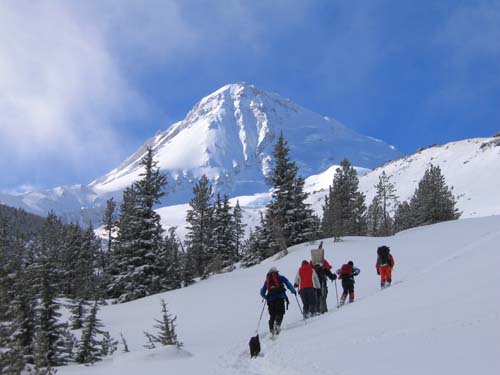 The fight to protect Mount Hood

Mount Hood and the Columbia Gorge symbolize the natural beauty of Oregon, yet much of these amazing landscapes remain unprotected. The mountain's high-elevation snowfields have received Wilderness designation, but the more biologically diverse lower flanks and surrounding ridges remain unprotected. Through cutting-edge technology and the efforts of more than 500 volunteers, Oregon Wild has identified unprotected natural areas in the Mount Hood National Forest over the past decade and sought federal Wilderness designation to preserve them.

Between 2004 and 2009 there were numerous versions of legislation to expand protections for Mount Hood. In January 2009, Oregon Senators Ron Wyden (D) and Jeff Merkley (D) re-introduced legislation that would give Wilderness protection to 127,000 acres and designate 80 miles of rivers around Mount Hood and in the Columbia Gorge as Wild and Scenic Rivers.

The plan wasn't everything we had hoped for but included critical protections for places like the scenic canyons along White River, the biologically diverse forests of Fifteenmile Creek, the old-growth forest surrounding Roaring River and the beautiful whitewater of the East Fork of the Hood River. The bill was passed in April of 2009 as part of a national public lands legislative package.

The Lewis and Clark Mount Hood Wilderness was an important step toward preserving the scenic beauty, biodiversity, clean drinking water and unparalleled recreational opportunities for future generations of Oregonians.