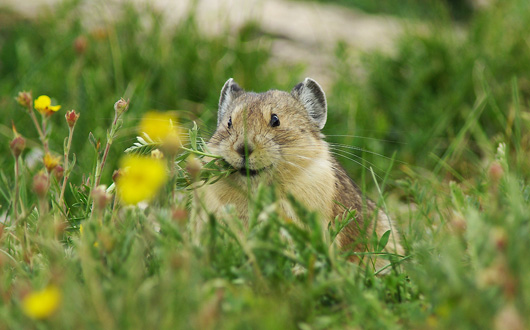 Commonly referred to as the "rock rabbit," American pikas are small mammals that inhabit rocky, cold alpine and subalpine areas, typically at elevations of 8,000 to 13,000 feet. Pikas are only found in the western part of North America, from British Columbia, Canada to New Mexico, United States. In Oregon, American pikas are celebrated residents of Crater Lake National Park, as well as other mountainous areas of central and eastern Oregon.

American pikas possess adaptations that allow them to exist in such cold places. Pikas' thick, brown fur and round bodies help them conserve heat efficiently on treeless, wind-swept slopes. Their furry paws provide traction for them as they scramble across snow. Despite their nickname, "rock rabbit," pikas' appearance differs significantly from their cousin the rabbit. Pikas have comparably little, rounded ears, no tail, and are much smaller: with adults' bodies about the size of a tennis ball, and babies not much larger than a walnut.

Pikas make their dens in rock piles and slides. They are territorial and defend their homes from predators, as well as other pikas. Pikas are vocal animals, and will use a sharp call or whistle to warn others of danger. When not defending themselves, pikas spend much of their time foraging for food; their diet is comprised of plants such as thistle, sedges, wildflowers, and grasses. Pikas store some of their food for winter in piles, referred to as "haystacks" or "haypiles." While pikas themselves are difficult to spot, their distinctive haystacks can provide signs of their presence.

Pikas are diurnal, active during the day, and forage year-round. Typically, pikas mate about a month before the first snow melt, somewhere between April and July. During this time, males will use their call to attract females. Pikas give birth to two to four babies, and raise them for about four weeks. At this point, the babies leave the mother, though they will not be adult size for another two months, and the mother may mate again.

Listen to the pika's call!

Pikas' tremendous ability to keep their bodies warm in such fierce conditions now poses a threat to the species. With continued climate change, temperatures in the western United States could increase by 5.4 degrees Fahrenheit by 2050, and up to 10 degrees Fahrenheit by 2100, according to the U.N. Intergovernmental Panel on Climate Change. While adapted to face harsh cold conditions, pikas are very vulnerable to increases in temperature: pikas can perish in as few as six hours of exposure to moderate temperatures of 75-77 degrees. Temperature increases will make the pikas' current habitat inhospitable to them, but pikas exist in a limited range: on high mountain peaks. While some pikas may be able to migrate further upslope, as temperatures rise many pikas will have nowhere to go.

Although the failure to get the pika listed was a setback in protection of the species, the National Park Service has undertook a research project, "Pikas in Peril", to learn more about the pika's current and future status in national parks such as Crater Lake. Specifically, National Park Service staff and academic researchers assessed the pika's vulnerability to different climate change scenarios for the western United States. Wrapping up in 2016, the study concluded that pika populations will decline and possibly go extinct in several parks by the end of the century. All actions that work to combat climate change and mitigate its impact also serve to help ensure the pika's continued survival. Phasing out fossil fuels and pressuring government leaders to take aggressive action against the climate crisis will hopefully give the pika a fighting chance at surviving into the next century.

Learn more about the pika and the work the National Park Service is doing to understand and protect it!