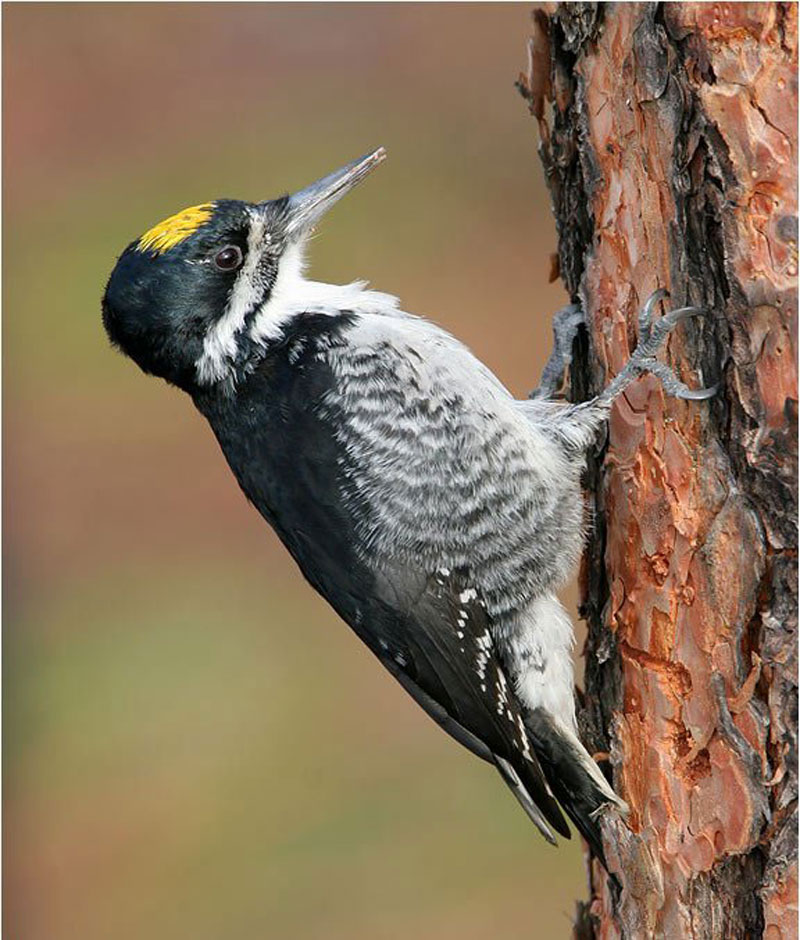 This medium-sized woodpecker feeds primarily on the larvae of bark beetles and wood-boring beetles in the trees of its forest habitat.

Like other woodpeckers, the Black-backed’s nest can be located in a hole in the trunk of a tree with chips or wood fibers in the bottom of the cavity. Its clutch size is typically three to six eggs that are white in color.

They generally are not migratory but their populations do shift as previous burned areas regenerate and new forests areas are burned or damaged.

The distinguishable features of this woodpecker include a yellow crown and bold white facial stripe on male birds and a similar black crown on females. Like many related species they have mostly black upperparts, including the tail with subtle pale barring on their flight feathers.

Their voice differs from the similar American Three-toed Woodpecker. The Black-back has a sharper chattering chik call and can also be detected by it’s typical drumming upon tree trunks.

The Black-backed Woodpecker is a bark forager that feeds mostly on trunks and fallen logs. The bird strips the bark from trees and then probes and excavates the wood. However they will also forage for fruits, nuts, and berries as well as insects in live trees.

An uncommon woodpecker of the northern coniferous forests, the Black-backed Woodpecker prefers burned-over sites. It moves from place to place, following outbreaks of wood-boring beetles in recently burned habitats.

While overall, populations of this bird remain stable; Oregon is a different story. Black-backed woodpeckers in Oregon are rare and only getting rarer. Their need for dead burned trees (snags) makes them especially vulnerable to habitat loss and mismanagement including aggressive fire suppression and salvage logging.

Decades of fire suppression mean less forest fires have occurred than did historically. Moreover, when forest fires do occur, the remaining snags are often removed as a part of salvage logging programs.

What looks like waste to a timber company accountant looks like a buffet to a woodpecker (and home to lots of other species). These woodpeckers depend on burned forests for their food: the larvae of wood-beetles that dwell in the conifers. They will travel long distances to find burn sites and feed on the insects that attack burned trees.

The plight of the black backed woodpecker has begun to generate some media attention. These reports recognize the important campaign to protect the particular habitat of the birds and enlist the woodpecker in the Endangered Species Act to secure habitat protection.

According to a recent report, there are fewer than 1,000 pairs of black-backed woodpeckers in Oregon and California. To protect the species, it is critical that Oregon learn from the mistakes of the past rather than double down on more fires suppression, aggressive timber harvest, and salvage logging.

See the Black-backed Woodpecker in action: