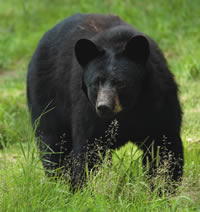 Ursus americanus, or black bear, is only found in North America and is the continent's most abundant and widely distributed bear species. In the past, black bears occupied forested regions across the majority of the continent, but their range has since been significantly reduced. Black bears are Oregon's only remaining bear species and are relatively populous, with 25,000-30,000 bears living in the state.

Black bears primarily make their home in forested areas. Black bears' ideal habitat consists of large tracts of forested land undisturbed by humans. They are strong climbers, and the bears, particularly cubs, climb trees to escape threats. Forests also provide many suitable den sites for bears to use during winter hibernation. Forests' shade helps black bears thermo-regulate during the summer, as do forest streams and pools. Wetlands, lowlands, and sunny openings in the forest provide bears with prime sources of food.

While it may be a surprise to some, black bears are omnivores whose diet consists mainly of nuts, berries, grasses, and insects. They are not typically active predators, but will eat small mammals, amphibians, fish, and carrion. Black bears often steal mountain lion kills, chasing the lion off and staying to finish eating the carcass. Bears have an incredible sense of smell and can be attracted to human food and garbage left out near homes and campsites, which can lead to conflicts between humans and bears.

Black bears are the smallest of North America's three bear species, which includes grizzly bears and polar bears. Adult bears are generally 5-6 feet long, and 30 inches high at the shoulder; female bears typically weigh 125-200 pounds and males typically weigh 200-250 pounds. As would be guessed by their name, black bears' are normally black, with a brown muzzle, but they can be brown, cinnamon, blueish, and even white.

Black bears are solitary animals. Each bear roams across a large territory, with male bears having a home range of 15-80 square miles. However, black bears do not defend their territory from other bears. Black bears use their strong climbing and swimming abilities, as well as their speed and agility to navigate their territories.

The average lifespan of a black bear in the wild is 18-20 years. Black bears reach sexual maturity at three to four years. Mating occurs in June and July, during which males become aggressive and territorial, competing to mate with as many females as they can. Females give birth to two to four cubs in the winter, while they are denning. Cubs remain with their mothers until the following spring, at which point females will breed again.

Black bears first came under the management of the Oregon Department of Fish and Wildlife (ODFW) in 1961 when they were reclassified from a predator to a game animal. This classification allowed ODFW to set limits on the hunting of black bear through designated hunting seasons, areas, and tag sales. Hunting is the tool ODFW uses to manage black bear populations in the state, and it is the primary cause of black bear mortality in Oregon.

As with cougar, black bear hunting and therefore management, was significantly affected by the passage of Measure 18 in 1994, which bans the use of dogs and bait to hunt black bears and cougars. Prior to Measure 18, the use of hunting dogs accounted for 31% of total black bear harvest and the use of bait accounted for 14% of the total. The decrease in black bear mortality that would have been caused by Measure 18 has been counteracted by a dramatic increase in the sale of hunting tags: 18,412 tags were sold in 1994 while 57,472 were sold in 2010. Indeed, mortality levels from hunting have reached pre-Measure 18 levels: 1,346 bears were killed by sport hunters in 2010 in Oregon, the same number killed in 1993.

The primary conflict that black bears are killed because of is damage to public and private commercial timber. In the spring, black bears peel the bark of saplings to access the sugar-rich sapwood. Unfortunately, this damages the vitality of the trees and sometimes leads to the tree's death. While ODFW encourages the use of non-lethal measures to deal with these bears first, land owners or government land agents may shoot these nuisance bears without a permit from ODFW, as well as use bait and/or dogs to kill bears on their property. Between 2003 and 2008, 140-229 bears were killed because of damage to timber crops.

Since western Oregon has both the greatest amount of timber damage and largest human population in the state, ODFW allows more hunting in western Oregon to decrease the population of bears in this area. Oregon's Black Bear Management Plan for 1993-1998 states: "In the interior valleys of the state, where agriculture is the primary land use and human dwelling is high, harvest management has greatly limited black bear numbers."

Other human-bear conflicts typically arise because of food. As previously stated, black bears have a powerful sense of smell and can be attracted to people's homes and campsites because of food left outside, or in garbage cans, feed sheds, bird feeders, or cars. Though black bears generally avoid humans and are not aggressive, there has not been a single documented human death caused by black bears in the state, bears can become habituated to easily accessible sources of food leading to conflicts, and often the elimination of the problem-bear. In 2011, 22 bears were killed because of threats to human safety. All individuals living or exploring in bear country have a responsibility to keep their food contained and inaccessible to prevent unnecessary killing of bears.