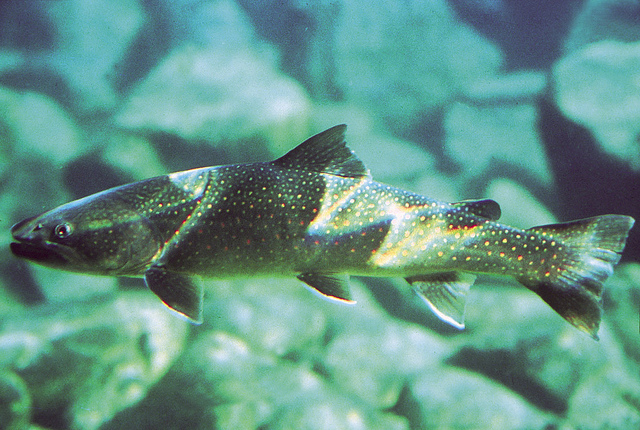 Bull trout, like many other members of the salmonid family, begin their lives in cold, clear streams, feeding on small aquatic invertebrates. As these fish mature, they either migrate out of their home stream to larger streams and rivers or lakes and reservoirs, or remain in the stream where they hatched. The migratory bull trout tend to become much larger than their resident counterparts—sometimes growing as long as 40 inches and heavier than 30 pounds. Stream dwelling bull trout rarely exceed 4 pounds and are usually 10 inches or less. Unlike Pacific salmon species that spawn once and die, bull trout will spawn multiple times in their lifetime. Migratory bull trout may migrate multiple times between spawning streams and their large river rearing habitats. Bull trout can be recognized throughout their range in Montana, Washington, Idaho and Oregon by their particularly large, broad head and their dark olive or brown color with lighter yellowish spots. In Oregon, bull trout were historically found in streams in the Klamath basin, the Columbia and Snake Rivers and their major tributaries, and the Willamette River and its major tributaries on the west side of the Cascades. Currently, most populations are found in the headwater areas of tributaries to the Columbia, Snake, and Klamath rivers.

This threatened fish has some very specific habitat requirements, and when they aren’t met, it can be disastrous for bull trout populations. Their physiology dictates that they need cold water (no higher than 60° F) to survive, as well as for the survival of their eggs. A river environment with low silt is equally important, with a gravelly bottom and plenty of protective habitat such as overhanging brush. Unfortunately, human activities such as logging have been steadily spoiling prime bull trout habitat. Logging and road building lead to siltation in rivers, lowering stream quality and raising water temperature, both of which lower the viability of eggs and hatchlings. Other threats, such as impassable dams, sometimes keep bull trout from spawning at all. Non-native brook trout also present a threat due to competition for food. In order to ensure the survival of this sensitive fish, it’s necessary that roadless areas be maintained and the fight for clean water continues.