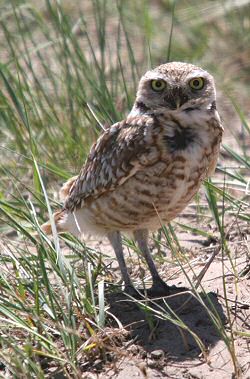 As its name suggests, the burrowing owl resides in the abandoned dens of ground squirrels and prairie dogs, although it will sometimes excavate its own burrow if there are none available. Burrowing owls tend to organize these burrows in loose colonies, with each nest inhabited by a monogamous breeding pair of owls and their clutch of 7-10 owlets. These miniature, long legged owls, just 6 ounces as adults, stand guard at the opening of each burrow, only leaving to hunt for small rodents and insects. When the seasons change toward winter, North American burrowing owls will migrate as far south as Central America.

See a family of burrowing owls in action

Although the burrowing owl has been relatively successful in dealing with human encroachment, adapting to using drainage pipes as burrows, its historic range has been significantly reduced. Increased human activity doesn’t seem to phase the burrowing owl as much as other sensitive species, but complete conversion of its habitat for agricultural uses or natural gas extraction can be detrimental to the population. Because the burrowing owl shares its habitat with prairie dogs, efforts to control the rodent with poison and traps have also had unintended consequences for the owl. Due to these threats and the owls worrisome decline in numbers, it is considered a species of concern under the Endangered Species Act, meaning that it may deserve to be listed as endangered, but sufficient proof to warrant such a listing is lacking. To keep these terrestrial owls out of harm's way and off the endangered species list, it is imperative that their habitat be conserved, not just for their sake, but for all the species that call the shrub-steppe ecosystems of the west home.