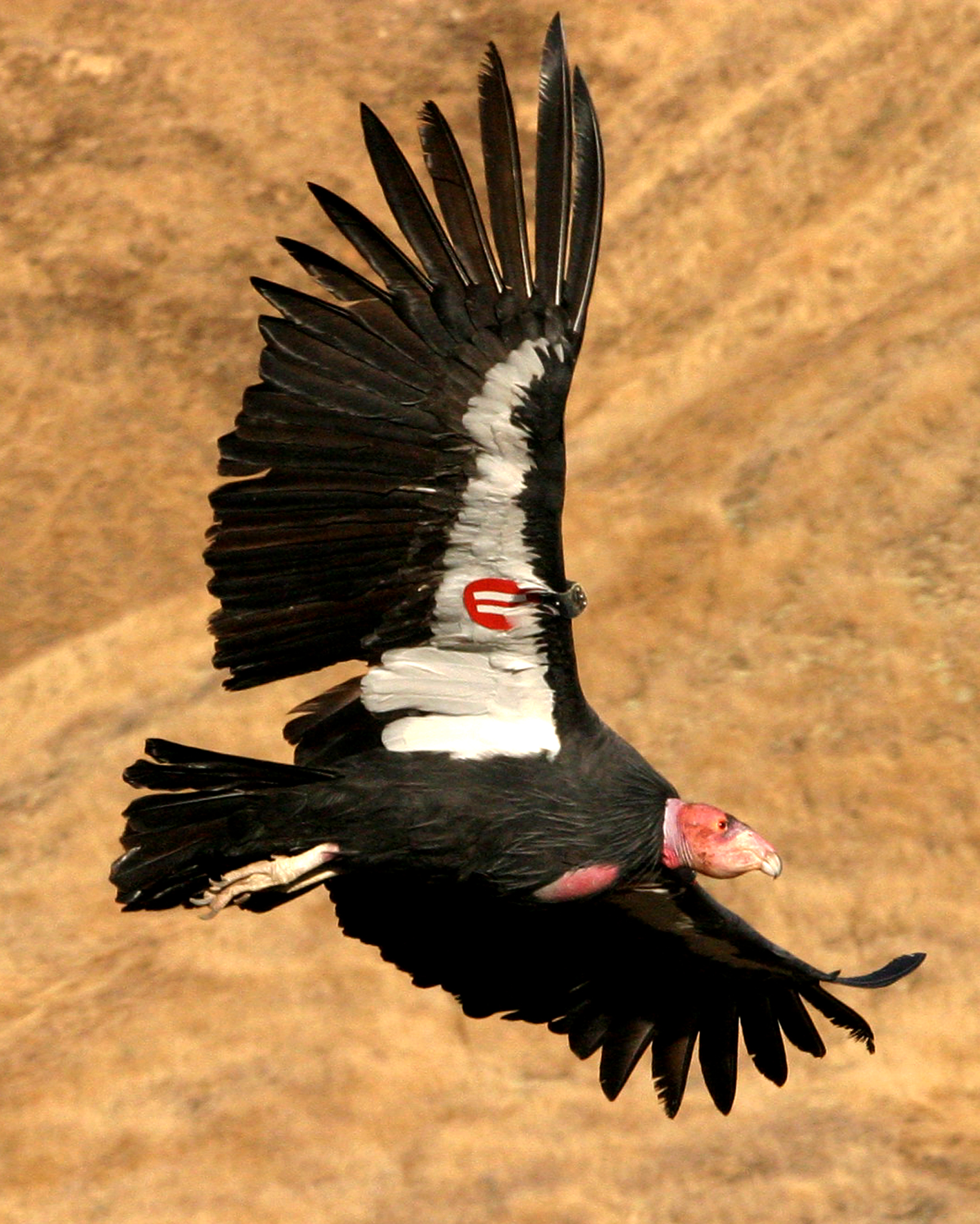 Once eliminated from the wild, it is again possible to see California condors stretching out their mighty wingspan across the sky. Historically, California condors occupied a range from British Columbia, Canada down to Mexico. However, today these condors are only found in southern California and around the Grand Canyon in northern Arizona and southern Utah. They require large areas of relatively remote land with rocky cliffs, tall trees, and snags to forage, roost, and nest.

The California condor is a striking bird. Adult condors range from   3 1/2 to 4 1/2 feet in height and have a wingspan of 9-10 feet across; they are the largest land bird in North America. They possess a distinct pink, bald head and neck. Their plumage is primarily black with the exception of white underwing markings. Condors keep themselves fastidiously clean: after eating they can spend several hours preening and cleaning their plumage in water pools, or if water is not available, on rocks, tree branches, and grass.

California condors are scavengers: they do not kill their own food, but consume dead animal carcasses. Indeed, condors do not have long talons capable of killing and grasping prey; they do, however, have a long, sharp beak to tear meat from carcasses. While condors will eat small rodents and rabbits, they prefer the carcasses of large mammals, and they require substantial areas of grassland and oak savanna that support populations of animals such as cattle, sheep, and deer. Condors have a poor sense of smell and therefore rely on their eyesight to find food. Once found, condors may eat up to 3 or 4 pounds of food at a time, roughly a 1/4 of their body weight, and then may not eat again for several days.

Reproduction for the California condor is a time-intensive process. Condors don't reach reproductive maturity until they are about 5-7 years of age. Female condors lay only one egg every two years; however, if an egg is lost, females will lay a replacement egg, referred to as double-clutching. The male and female condors take turns incubating the egg, a process that lasts for 54-58 days. After 6 months, the new condor is capable of flying, but it will remain dependent on its parents for up to one or two years, as it learns to forage and feed itself.

It is undeniable that the pioneers' arrival to the Western United States caused the drastic decline of the mighty California condor. With the pioneers came previously unknown threats to the condor such as loss of habitat, poisoning, and shooting. In 1904, the last California condor was spotted in Oregon, and by the 1940's condors were found solely in the coastal mountains of California. The condors' precipitous decline only continued: in 1987 only 22 California condors remained worldwide.

Hoping to prevent complete extinction of the species, the last wild birds were captured in 1987. A captive breeding program began at the San Diego Zoo, and in 1992 two condors were reintroduced into the wild. Captive breeding programs have since expanded , and utilizing condors' double- or triple-clutching ability, the number of California condors has been significantly increased: there are now roughly 300 California condors in existence, with about 130 flying free in the wild.

Despite their comeback, California condors remain an endangered species and threatened by humans' habits. The condors' historical decline was a result of a high mortality rate paired with a low reproductive rate, and this combination still threatens them today. Poisoning, pollution, development of habitat, and shooting continue to pose a perilous threat to the species. Condors are also endangered by poaching, and collisions with powerlines. Out of these, lead poisoning and microtrash ingestion pose two of the largest threats to condors.

While California condor populations are rebuilding, these great birds have yet to return to anywhere near their former range, including Oregon. The Oregon Zoo is helping reestablish populations in California and Arizona through their captive breeding effort, but the organization states that efforts to return condors to Oregon and the Pacific Northwest remains a distant goal; a goal that "will require us to think in terms of the restoration of whole ecosystems, including healthy salmon runs, viable mammal populations, and even the vitality of our own cultures and ability to coexist with and regenerate natural systems." Restoring our ecosystems also means bringing back top predators, such as the gray wolf, that play a vital role in shaping and keeping ecosystems in balance, as well as provide carrion for condors. Oregon Wild is working hard to do just this: fighting to protect the rivers, forests, wilderness, and wildlife that make Oregon such a great place to be. Hopefully, with time, the work of Oregon Wild, other organizations, and individuals will allow the California condor to spread its wings over our state once again.