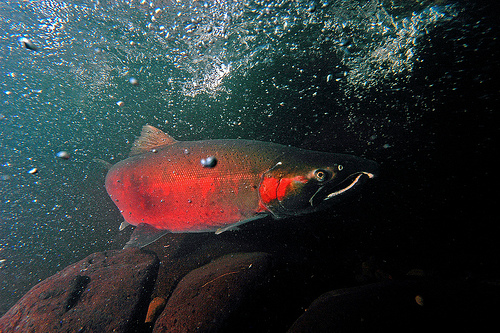 Coho salmon are one of seven salmon species native to the Pacific Ocean. All salmon, including coho, are anadromous, meaning they spend part of their lives in the ocean and part in freshwater. Oregon coho salmon begin their lives far up our state’s rivers and streams eating small insects and plankton, and once they are big enough they travel downstream to coastal waters. There, they spend 2-3 years feeding on a variety of smaller fishes. Mature coho salmon develop a dark reddish color and a hooked nose: this change signals the beginning of their spawning journey back to the very same stream where they were hatched. Once they’ve completed their goal of mating, the salmon die and their decomposing bodies nurture generations of salmon, and other wildlife, to come.

These salmon are an extremely important species, and their presence is necessary for a properly functioning ecosystem. Their value as prey cannot be stressed enough— more than 100 species count on coho and other pacific salmon as a food source, and salmon’s decomposing bodies turn streams into nutrient rich breeding grounds for important species of fish, insects and plants alike. In this light, it is doubly concerning that several populations of coho salmon are listed as threatened or endangered by the Endangered Species Act. Declining salmon numbers are caused mostly by human activities, such as diverted stream flows due to agriculture and dams, irresponsible fishing practices and disturbance of stream habitat from activities like logging and mining. Movements like Oregon Wild’s Rivers and Clean Waters campaign are part of the fight to protect salmon habitat and keep the balance of Pacific Northwest ecosystems intact.

What should also not be forgotten is the cultural and spiritual significance of salmon to the Indigenous peoples of the Pacific Northwest. For thousands of years, the cultures, intertribal interactions, trade economies, fishing technologies, and religions of the Pacific Northwest tribes were impacted by salmon. A collapse of salmon fisheries in the Northwest would be devastating to ecosystems as well as the livelihood and cultural traditions of the region’s First People.