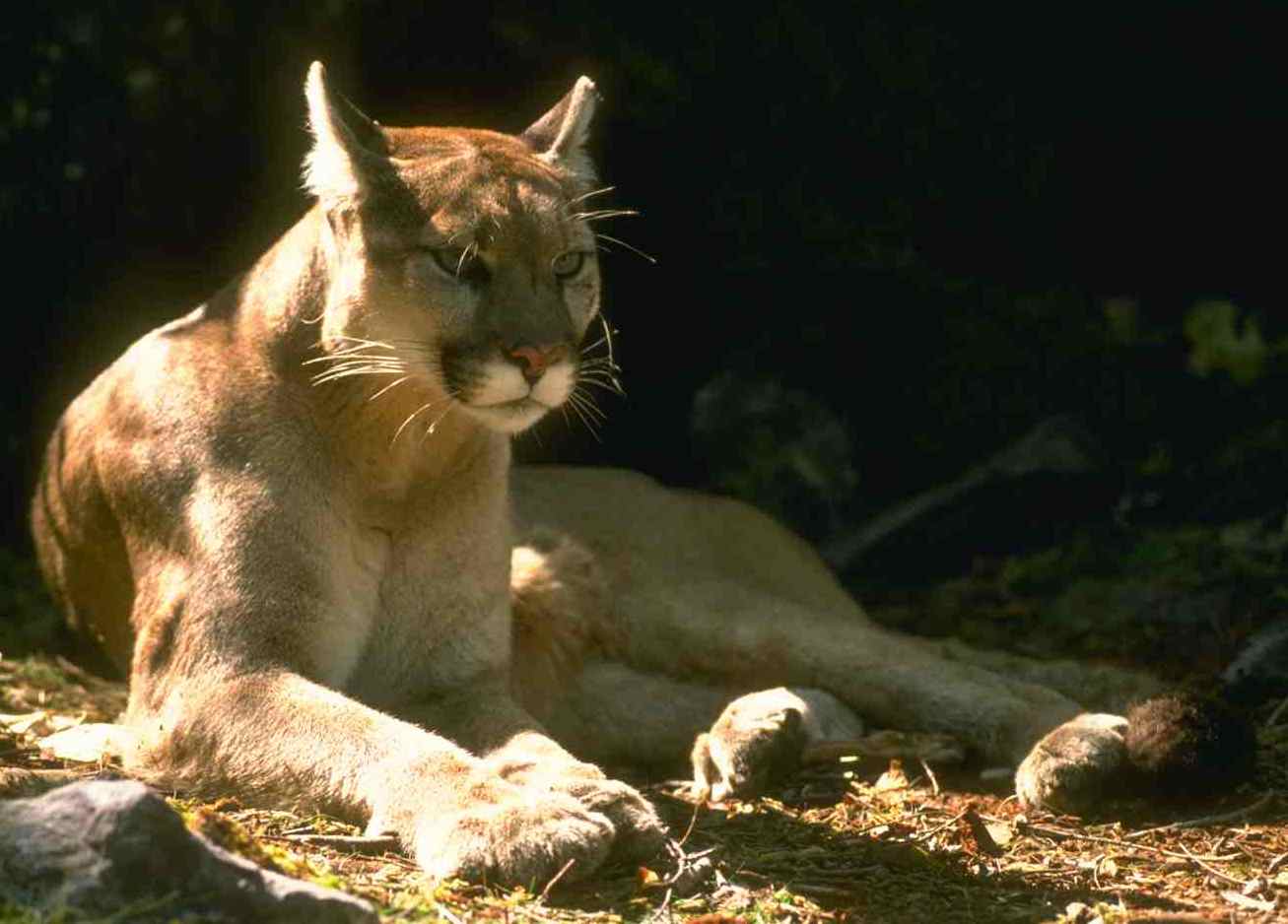 Cougars are the second largest cat in North America. Despite their size and presence across much of the western part of the continent, these cats are rarely seen by humans. Indeed, they are "shy," solitary creatures that spend the majority of their lives alone; cougars require large territories, between 100-300 square miles, which they defend from other cougars.

Cougars have very long, slender bodies with females around six feet in length and males reaching eight feet. Cougars also have very long tails, which make up a third to half of their total body length. Their fur is uniformly colored either red-brown or gray-brown.

Once considered to by largely solitary animals, recent research has indicated cougars have complex social structures. They begin to breed at 2-3 years old and continue to breed every 2-3 years throughout their lifespan, which lasts an average of eight years. Females initiate courtship during which males and females live together. Females produce a litter of 2-3 kittens, which they raise to maturity, a period of 18-24 months.

Cougars can occupy a wide variety of environments such as Florida's swamps, the Southwest's deserts, and the Pacific Northwest's damp forests. However, cougars do require habitats that provide sources of large prey and terrain or vegetation to provide cover for them while they are hunting. They are versatile athletes that can climb trees, leap vertically and horizontally, and swim.

Cougars are also powerful predators. They prefer large prey, primarily deer, but will consume smaller animals such as coyotes, porcupines, and raccoons. Cougars typically hunt between dusk and dawn. These cats do not chase their prey, but stealthily stalk and ambush it, commonly leaping onto their prey's back and lethally biting it in the neck. Cougars typically consume a deer every week to ten days, and will hide large carcasses to feed off of for several days.

As a top predator, cougars play a critical role in maintaining the health of the ecosystems they live in. First documented in the return of healthy riparian structures in Yellowstone Park after the reintroduction of wolves, top predators such as cougars, wolves, and bears have repeatedly been shown to have a disproportionate impact on the health of ecosystems by keeping the populations of herbivores such as deer and elk in check. Prolonged absence of these predators leads herbivorous animal populations to wreak havoc on ecosystems' vegetation, reducing the health and biodiversity of both plants and animals. Recently, the absence of cougars in Zion National Park, and the resulting large populations of deer, has been linked to eroded stream banks and a loss of riparian vegetation and species.

Once the most widely distributed land mammal in the Western Hemisphere, the cougar has now been eliminated from most of its native habitat. Indeed the cougar used to roam across the entire U.S., but cougars east of the Mississippi are now considered extinct, with the exception of the Florida panther. Within the U.S. cougars only exist in large enough numbers to maintain viable breeding populations in the western states.

The elimination of the cougar from the East was a result of the ceaseless trapping and hunting by the early settlers, who considered the cougar a threat to humans and livestock, as well as a competitor for game animals. Cougars were nearly extinct by the late 1800's, and increasing deforestation, which reduced the cougar's habitat and its main food source the white-tailed deer, spelled the final destruction of the eastern cougar. While in parts of the East forests and white-tailed deer populations have rebounded, the return of cougar populations remains unlikely due to a variety of conflicts stemming from human modification of the area.

Initially, the history of the cougar in Oregon followed a similar storyline as the eastern cougar. Historically widespread and prevalent in the state, as settlers arrived cougar populations began to decline. Settlers ferociously hunted the cougar, and bounties were placed on the animals to create further incentives for their speedy removal. By 1961, cougars were nearly eliminated, with only approximately 200 left in the state.

In 1967 the cougar was reclassified from a predator to a game animal, which gave the Oregon Department of Fish and Wildlife (ODFW) management control over the population. Under ODFW's management, cougar hunting continued, aside from the years of 1968 and 1969, but was controlled through the issuing of hunting tags and demarcated hunting areas. From 1971-1994, as cougar populations increased so did the allotted hunting areas and number of hunting tags, as well as the popularity of cougar sport hunting.

In 1994, cougar management took a turn when Measure 18, an initiative put on the ballot by Oregon citizens, was passed. Measure 18 outlaws the use of dogs for cougar sport hunting, which appealed to many as a way to reduce the number of cougars killed by sport hunters, since the use of dogs is considered the most efficient way to hunt cougars. While Measure 18 initially reduced the numbers of cougars hunted, policy changes by ODFW, as well as the Oregon Legislature, have served to counteract the effects of Measure 18. Season and area limits on hunting were removed, the price of cougar tags dropped from $50 to $10, and tag sales increased from 937 in 1997 to over 34,000 in 2003. As a result, the number of cougars killed has returned to pre-Measure 18 levels.

Oregon's Cougar Management Plan requires a minimum population of 3,000 cougars, but has no upward ceiling or limit on the cougar population. ODFW estimates Oregon's current population of cougars to be at around 6,600. However, ODFW includes kittens in their estimates, many of whom never reach adulthood. No other game species in Oregon is counted this way, leading wildlife biologists and managers in other states to believe ODFW radically overestimates Oregon's cougar population. This can lead to overhunting, which in turn can disrupt cougar social structures and result in more conflict with livestock and people.

Aside from management policies, cougar populations also require suitable habitat to exist in Oregon. Oregon Wild does its part to support cougar populations by fighting to protect the wilderness, forests, and water that cougars rely on.