Scientific Name
Canis lupus
Size
4.5-6.5 feet from nose to tail, 60-130 pounds
Habitat
A variety of habitats—from grasslands, deserts and tundra to mountainous woodlands
Status
Delisted federally in 2020 (a small population of Mexican wolves in AZ and NM are still listed) 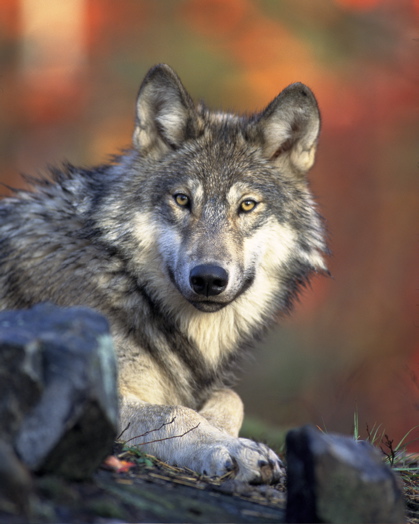 The gray wolf is a generalist by nature, meaning that it can survive in a variety of habitats, including frozen tundra, dry grasslands and deserts, and wooded forest habitats. Assuming there is an adequate supply of prey, gray wolves can flourish in any of these environments, and once inhabited more than 2/3 of the United States. The majority of gray wolves’ prey consists of large ungulates, or hoofed mammals, such as elk, deer, moose and bison, but occasionally they will hunt smaller mammals and rodents or feed on carrion if prey is scarce. Gray wolves are highly social animals-- they rely on a tight pack structure for hunting and protection, and are known to form very strong family bonds within the pack. Each pack consists of two breeding wolves, the alpha male and female, their pups, and subordinate wolves of various ages. Although they’re called gray wolves, they can range in color from arctic white to tan and gray to jet black—a whole pack together can be quite a colorful collective.

For more information, check out our fact sheet about wolves.

For as long as there has been Western civilization present in North America, the gray wolf has been in trouble. European settlers found wolves difficult to live with, as they occasionally preyed on livestock. By the 19th and 20th centuries, intensive predator control programs were underway, and wolves were extirpated from most states by the early 1900’s. The last gray wolf in Oregon was shot and killed in 1946. It’s been more than half a century and gray wolves are finally starting to make a comeback in Eastern Oregon. Though things have changed since the days of government sanctioned wolf hunts and bounties, wolves are still facing very real threats in the western states they now inhabit, such as Oregon, Idaho, Montana and Wyoming. Centuries of industrialization and urbanization have led to very fragmented, isolated habitat for wolves, and despite gains in general societal acceptance of wolves, there are still those who would like to see gray wolves disappear from the landscape once again.

Since their reintroduction to Oregon in 2009, the wolf population has been steadily increasing, with a 2020 population estimate of 173 wolves. However, gray wolves in the state are still in grave danger of being wiped out again if the need for their conservation and restoration is ignored and they are killed simply to appease the livestock industry. In order to ensure a sustainable, healthy population of wolves in Oregon, which are considered endangered by the state, stronger protections from the Department of Fish and Wildlife are necessary. Check out Oregon Wild’s wolf page for more information and news on the fight to protect gray wolves in Oregon.

Resources for educators and kids.

A gray wolf spotted in NE Oregon in 2008