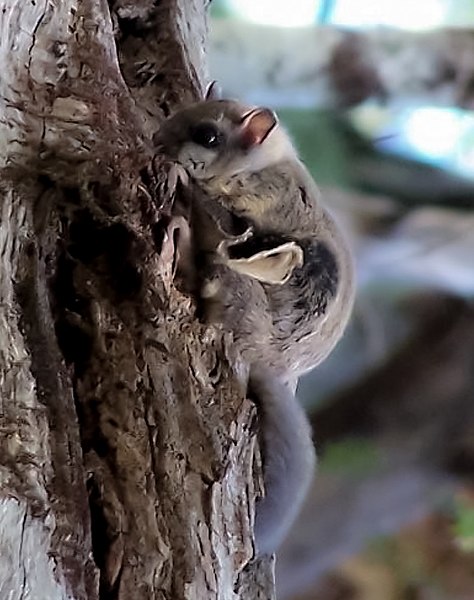 Introducing Humboldt’s Flying Squirrel, North America’s newest mammal, and one of (now) three species of the genus Glaucomys. Until recently, these squirrels were thought to be the already-documented Northern Flying Squirrels (G. Sabrinus). But, after closer examination, scientists realized they were a new species entirely. Humboldt’s flying squirrel was discovered through a genetic study, combined with analysis of the flying squirrels’ history and mapping of their shifting ranges over time. Humboldt’s Flying Squirrel very closely resembles the Northern Flying Squirrel, however, they’re typically smaller with darker coloration; and this is what sparked curiosity in the scientists who studied them.

Despite their name, Humboldt’s flying squirrels aren’t actually capable of powered flight, like a bird or a bat. Instead, they have a membrane that extends from the wrist of the foreleg to the ankles of the hindleg, allowing them to glide from tree to tree without touching the ground. Slight movements of the legs allow them to steer and that puffy tail acts as a brake. They can cover up to 150 feet in a single glide with exceptional accuracy. They take shelter in tree cavities, leaf nests, underground burrows, and abandoned nests of birds and other squirrels. These squirrels are nocturnal, but may occasionally be spotted during daylight hours. Optimal conditions appear to be cool, moist, mature forest with abundant standing and downed snags. Their activity continues, even at low temperatures and in snow.

Humboldt’s Flying squirrel can be found in forested habitats along the Pacific coast of North America, from Southern British Columbia to Southern California. Their range overlaps that of the northern flying squirrel (G sabrinus). So far, the data collected on this specific species is minimal. Researchers still need to assess their abundance and the role they play in their ecosystem.

These squirrels are found in areas with threatened spotted owls, owls which feed on flying squirrels. There’s reason for concern when a species in the hierarchy of organisms is disrupted by a lack of food supply. And, as with many species who rely on forested ecosystems, Humboldt’s flying squirrel faces the threat of invasive species, wildfires, climate change, and habitat loss due to land use practices, such as deforestation.

Research and profile by Jessica Riccardi with updates from Jordan Latter