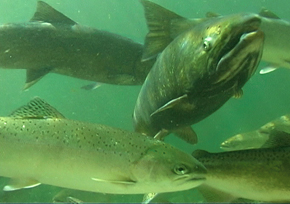 Chinook salmon are one of seven salmon species native to the Pacific Ocean. Chinook salmon vary in size and age of maturation, with smaller size related to longer distance migration, earlier timing of river entry, and cessation of feeding prior to spawning. Young Chinook, known as fry and fingerlings, are 30-45 mm and 50-120 mm in fork length respectively. Chinook salmon mature at 30 pounds and 36 inches and are the largest of the Pacific salmon species; many adults exceed 40 pounds. As length corresponds to age, two year-old adults tend to be around 40 centimeters long, and six year-old adults often measure one meter in length.

Chinook salmon have a different appearance depending on location and lifecycle. In fresh water, juvenile Chinook are camouflaged by silver flanks with parr marks (darker vertical bars or spots) on the back, dorsal fin, and both lobes of the tail fin. Chinook also have black coloring along the gum line, making the mouth appear black.

The spring run component of the Upper Klamath-Trinity Rivers ESU has seen dramatic declines from historic levels and is in danger of becoming extinct in the foreseeable future. Most known spring run populations have been extirpated and the few runs that do still exist have undergone severe declines, are small in size and many are overrun by hatchery fish, leaving the spring run at immediate risk of extinction. Several human caused and naturally occurring threats have led to the precarious status of spring run Chinook in the Klamath Basin, necessitating their protection under the Endangered Species Act.

In June 2021 the California Fish and Game Commission announced their unanimous decision to list the Klamath-Trinity River spring chinook salmon as an endangered species under the California Endangered Species Act. 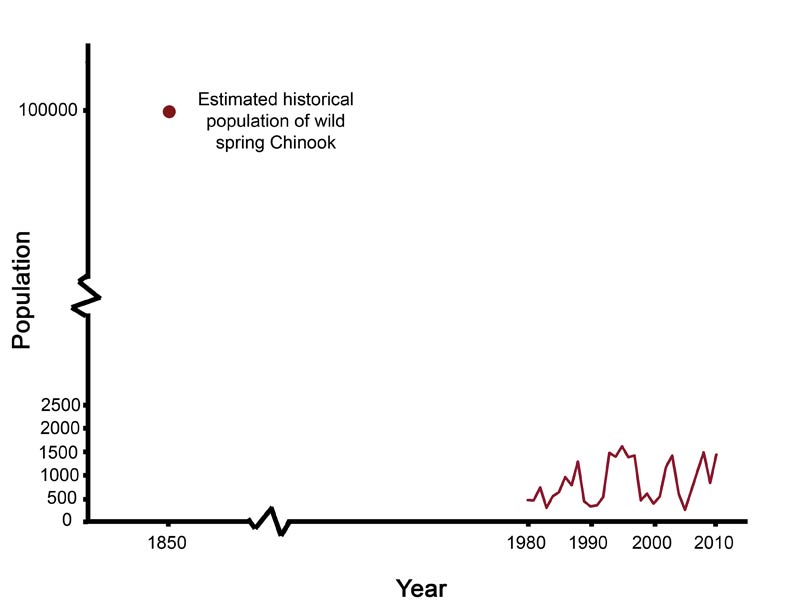 Photo Credits
Photo courtesy of the Environmental Protections and Information Center.
View All