The Klamath Basin in southern Oregon is home to four species of sucker fish.  Two of these “lake suckers”, the Lost River sucker (Deltistes luxatus) and shortnose sucker (Chasmistes brevirostris), are listed as endangered.

Lake suckers in the Klamath Basin while having “sucker mouths” differ morphologically from other suckers species in the west in having more terminal or subterminal mouths.  These species also possess numerous, branched gill rakers. Both mouth position and gill raker structure suggest these species are adapted for feeding in a more forward manner on prey such as zooplankton rather than consuming prey from the substrate.

Lost River suckers can weigh up to 9.9 pounds and generally reach 2 feet 7 inches in length (although some can be over a yard long).   Shortnose suckers are smaller, usually up to about 18 inches long, although some individuals may reach 2 feet in length.

Juvenile suckers grow rapidly until reaching sexual maturity sometime between four and nine years for Lost River sucker, and four and six years for shortnose sucker.  In Upper Klamath Lake spawning occurs from February through May over gravel substrates less than 4.3 feet deep, where suckers travel up tributary rivers to spawn, but historically also spawned along shoreline springs. Females broadcast tens of thousands of eggs which are fertilized most commonly by two accompanying males, but sometimes as many as seven males may be involved.

The biggest problem currently facing suckers has been the draining of wetlands and the degradation of their natural Klamath Basin marsh habitats. Most water bodies currently occupied by Lost River sucker and shortnose sucker do not even come close to meeting water quality standards for nutrients, dissolved oxygen, temperature, and pH set by the States of Oregon and California.

When aquatic vegetation is lost from what was once near-shore shallow waters, phosphorus and other polluting chemicals are no longer removed from the water though absorption by aquatic plants--that otherwise lock free organic constituents into marsh maintained soils. But even worse, when these peat and organic soils, formed over the millennia, are exposed continually to open air in cattle pastures and farm fields, chemical oxidation occurs, further accelerating the release of polluting nutrients, and that stimulate the growth of blue-green algae (cyanobacteria). In summer this algae turns almost the entire surface of Upper Klamath Lake “pea soup” green.  Next, when enormous seasonal algae blooms crash and die, oxygen involved in its decomposition is removed from the water.  The result is fish and other aquatic organisms die.  Additionally, this degraded water quality increases the extent to which pathogens and parasites then weakens fish, thus further negatively impacting sucker survival.

Not only are these sucker fish and their associated marshland/wildlife habitats an important part of the Klamath Basin ecosystem, they also have great cultural importance to area tribes, and served as a major food source for centuries prior to European settling of the region.

Historically, the Klamath and Modoc Tribes were able to harvest thousands of suckers every year while still leaving enough fish for a sustainable population. Klamath Tribes today are restricted to very few fish that can be captured only for scientific and sometimes ceremonial purposes. The tribes and other government and private organizations, are working to protect and restore the habitat that is necessary for sucker survival.

An effort to maintain clean rivers, lakes and wetlands in their natural state is the only way Lost River and shortnose sucker populations will recover. 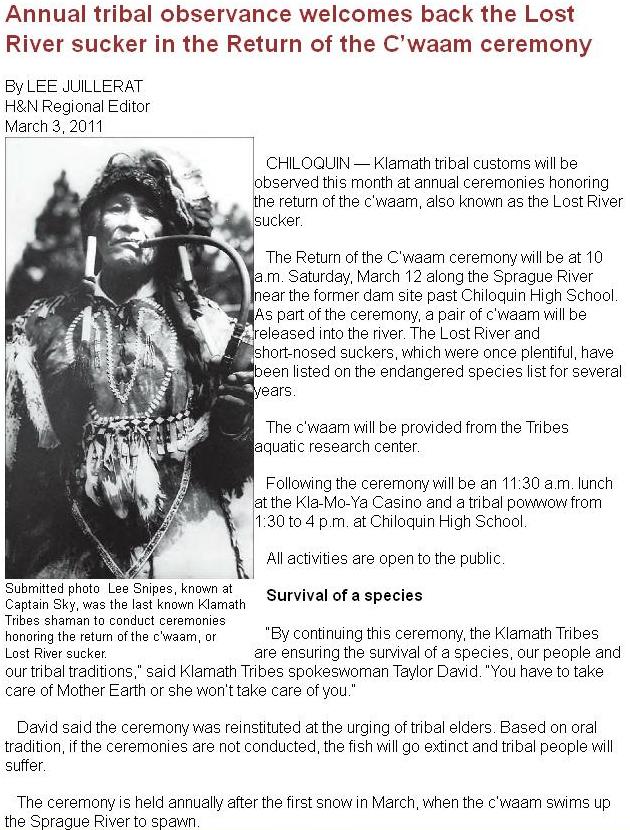